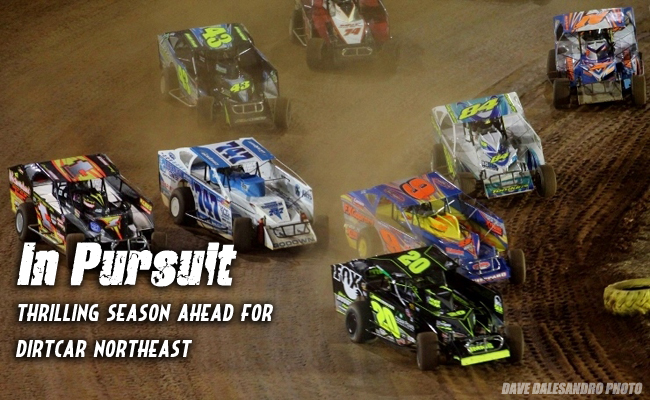 Thrilling Season of Racing Ahead in 2014

Thrilling Season of Racing Ahead in 2014 for DIRTcar Northeast Series

WEEDSPORT, N.Y. – Jan. 21, 2014 – Another action-packed year of DIRTcar Racing is set to kick off soon, with the Northeast’s premier traveling series taking on the region’s most exciting tracks. For the 2014 season, the Super DIRTcar Big-Block Modified Series spans from Florida to Quebec, bringing the best of the Big-Block Modfiieds to their classic venues and adding some new ones to the mix.

The DIRTcar 358-Modified Series, DIRTcar Sportsman Modified Series and DIRTcar Pro Stock Series are also revving up for one of their busiest seasons in years, boasting a total of more than 60 races among the four DIRTcar Racing Northeast Region series.

The Super DIRTcar Series begins its season earlier than the rest with four races at Volusia Speedway Park in Barberville, Fla., bringing the cars and stars from the chilly northeast to warm Florida in February. The races, scheduled daily from Wednesday, Feb. 19, through Saturday, Feb. 22, may not be point races, but that won’t stop recent series champions Brett Hearn and Matt Sheppard from trying to oust the defending DIRTcar Nationals presented by Summit Racing Equipment champion, Danny Johnson, from his throne.

Once the Super DIRTcar Big-Block Modified Series heads back north it kicks into high gear in spring, returning to Central New York’s Fulton Speedway on Saturday, April 26, for the first 100-lap feature of the season. The Super DIRTcar Series then crosses the border to Brockville Ontario Speedway in Brockville, Ontario, for an early-season special event.

The DIRTcar Sportsman Series gets an early start in 2014 as well, with a Sunday, April 27, opener scheduled at Mohawk International Raceway in Akwesasne, N.Y.

In early July, the DIRTcar 358-Modified Series swings westward for consecutive race nights at Humberstone Speedway Tuesday, July 1, and Ransomville Speedway Wednesday, July 2. Ransomville Speedway will also host the DIRTcar Sportsman Modified Series for its infamous Battle at the Border. The very next night, the Super DIRTcar Series joins the Empire Super Sprints at Rolling Wheels Raceway Park in Elbridge, N.Y., for a spectacular night of racing action Thursday, July 3. From there, the series roars to the Capital Region for Brett Hearn’s The Big Show 6 on Tuesday, July 8, at Albany-Saratoga Speedway, where once again it will be joined by the DIRTcar Pro Stock Series.

The Super DIRTcar Series returns Tuesday, July 15, to Big Diamond Speedway, marking the first time since 2009 the series has toured the track in Minersville, Pa. The series will then head to Glen Ridge Motorsports Park, in Fultonville, N.Y., on Wednesday, July 16. Both the Super DIRTcar Series and the DIRTcar Sportsman Modified Series take a trip north of the border for doubleheaders Monday, July 21, at Autodrome Granby and Tuesday, July 22, at Autodrome Drummond.

A couple nights later the Big-Block Modifieds will once again light up Weedsport Speedway in Weedsport, N.Y., for the annual Hall of Fame race. The DIRTcar Hall of Fame Induction Ceremony will honor the sports best contributors Wednesday, Aug. 6, and the Super DIRTcar Series will take on the history-packed track Thursday, Aug. 7.

The thrilling “Mr. DIRT Track U.S.A” at Lebanon Valley Speedway caps off the month of August for the Super DIRTcar Series on Thursday, Aug. 14. The DIRTcar 358-Modified Series carries the DIRTcar Northeast Region to the fall post-season with a Sunday, Aug. 31, 125-lapper at Cornwall Motor Speedway.

While the weekly season winds down, the DIRTcar Northeast series speed up into their final rounds with several action-packed race weekends across the region. Friday, Sept. 5, and Saturday, Sept. 6, the Super DIRTcar Series, DIRTcar 358-Modified Series and DIRTcar Pro Stock Series invade Autodrome Granby, with the first highlighting Friday’s racing and the latter two taking over Saturday. Meanwhile, the DIRTcar Sportsman Modified Series is set to take on three tracks in as many days, starting at Ransomville Speedway Friday, Sept. 5, heading to Merrittville Speedway Saturday, Sept. 6, and concluding the weekend Sunday, Sept. 7, at Humberstone Speedway.

*All events subject to change.

* Note: To be eligible to compete at the 8th Annual World Finals a driver must attempt to qualify for a scheduled Super DIRTcar Big Block Modified Series event during the 2014 calendar year (this includes the 42nd Annual DIRTcar Nationals at Volusia Speedway Park).

* Note: To be eligible for the Series Championship in either the Super DIRTcar Big Block Modified and/or Mr. DIRTcar 358 Modified Series, a competitor must compete in 75% (percent) of the scheduled DIRTcar events at their selected DIRTcar Weekly sanctioned home track to earn the minimum portion (900) of their ‘Bonus’ points.