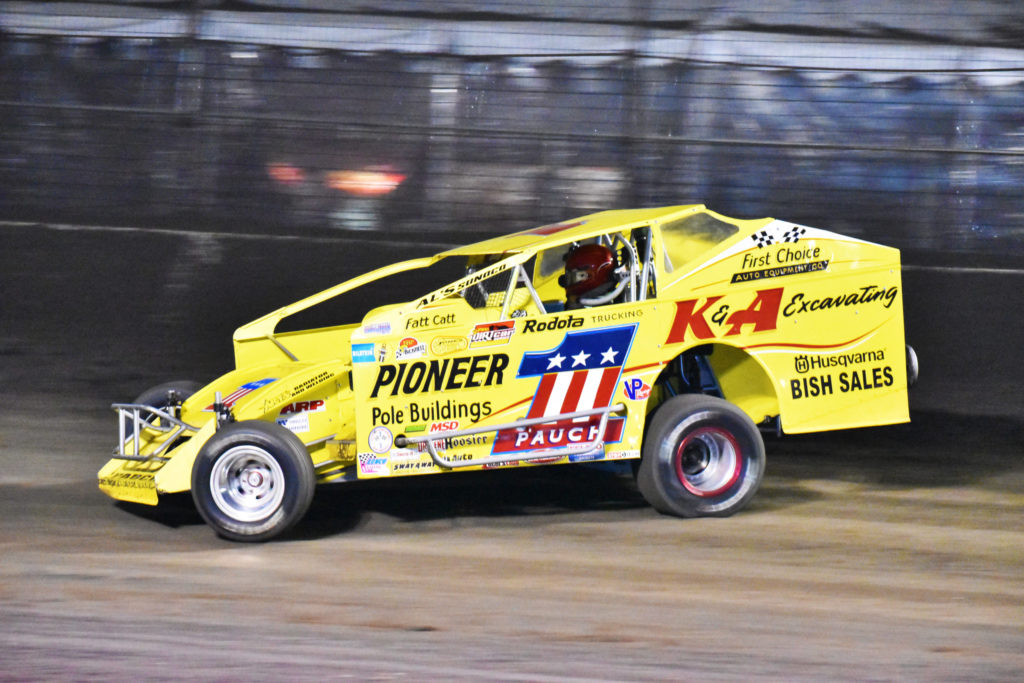 THERE AND BACK AGAIN: Big Block Modified legends Tim Fuller and Billy Pauch on finding Victory Lane outside the cockpit of a modified

In the past, a number of Super DIRTcar Series drivers have made forays into racing disciplines outside of their familiar Big Block Modified seat. Two of these drivers are featured on the DIRTVision Watch Parties this week: Billy Pauch and Tim Fuller.

The legendary Billy Pauch, from Frenchtown, NJ, is one of the few drivers able to conquer both Big Block Modifieds and 410 sprint cars. Although he never followed the series full time, Pauch has accumulated 14 Super DIRTcar Series wins, which puts him twentieth overall on the all-time wins list.

Although he’s successfully raced in a wide range of premier race car divisions, Pauch noted, “Modifieds are my forte.”

(RELATED: Hear from Tim Fuller Friday at 7 pm ET on DIRTVision when he recalls his first World of Outlaws Morton Buildings Late Model Series victory, and then on Saturday at 7 pm Billy Pauch joins DIRTVision to talk about his win in the 1994 World of Outlaws NOS Energy Drink Sprint Car Series event at the New York State Fairgrounds Moody Mile.)

Pauch was inducted into the Northeast DIRT Modified Hall of Fame in 2016.

“Modifieds are what I grew up with and it’s what I feel most comfortable in. I love Sprints, believe me, and I drove for a lot of good people in Sprint Cars. The Sprints are physical and more of a younger guy’s car,” said Pauch.

Pauch won one of the crown jewels of sprint car racing: The 1994 Supernationals at the New York State Fairgrounds mile speedway. The famous win was over the best drivers of the World of Outlaws NOS Energy Drink Sprint Car Series.

First, all the fan-favorite Frenchtown driver had to do to put the Zemco #1 Sprint Car on the front row was break a world record. So he did.

Pauch wheeled his trimmed-out sprinter around The Moody Mile, clocking in a blistering lap of 24.825 seconds which was over 144 MPH average speed around the track.

This incredible record would stand until 2015 when Paul McMahan astonishingly broke the record at Rolling Wheels Speedway, ironically on the night before the final race ever on the famed Syracuse Mile.

Teams were known for building Syracuse specials. These were purpose-built designs for maximum straight-line speed. The unique creations found throughout the pit area were a part of the draw to The Moody Mile. Pauch’s Zemco entry was one of the most sealed-off sprint cars to ever roll off a trailer.

“It was my second year going to Syracuse with Zemco. They learned and watched the other teams. They were pretty sharp on getting the car aerodynamic,” said Pauch. “The team really slicked it up. That was the key. That and Davey Brown building the motor. Those together really gave me something special for Syracuse.”

Pauch also noted, “The biggest thing you can take back to the short tracks after a win like that is confidence. That always helps a lot.”

Incredibly, Pauch raced at the top echelon of both Big Block Modifieds and Sprint Cars at the same time for many years, even fielding cars at NAPA Super DIRT Week in both divisions on the same weekend. Few drivers are that adaptable.

The speeds and treacherous nature made passing a premium on The Mile. Pauch preferred passing in the Modifieds because “you had the addition of ‘rub rails’ which you don’t have on a Sprint Car so you could muscle your way up a bit. If you tried that in a Sprint Car you’d usually hook wheels and go for a ride. It was easier to pass with a Modified,” Pauch attested.

Over the years, The Kid never shied away from a challenge. No matter what, he always drove the highest tier race car he could get his hands on.

After winning many races on Flemington Speedway’s dirt, Pauch spent some time on the new asphalt when the track was paved in 1991.

“Flemington was my home track. I won a lot of races there. In 1991 they paved it,” noted Pauch. “We switched the dirt cars over and ran the pavement but that only lasted for a couple of years. Then they went with the Asphalt Modifieds or what I call pancake cars.”

There was one “pancake car” that Pauch really liked and that was Mario Flores’ #44 Race of Champions asphalt modified. Here he describes the famous race at Flemington:

“They called me to run the Race of Champions race at Flemington in Mario Flore’s car. I knew it was a good car and I wasn’t doing anything so I took him up on it. I went up there and got the car in the show and started forty-third. It was a tough day coming through the field. The car got tight. At around 50 to go, I was in the top 10 and I told the team I couldn’t get the car to turn so they said pit next caution. We pitted and they made an adjustment and changed the right front tire. In 50 laps I came back through and won the race!”

Pauch returned to Flemington again in a NASCAR Truck Series race and finished a career-best sixth.

Today race fans can find the hand-painted, yellow #1 Big Block Modified racing around New Jersey and Pennsylvania, but also at select Super DIRTcar Series races like this year at Volusia Speedway Park for the DIRTcar Nationals.

Fuller has 31 Super DIRTcar Series wins, which is good enough for eighth on the all-time wins list, tying him with Jack Johnson. After winning the Series championship in 2005, Fuller was ready for a new challenge.

Fuller hooked up with Gypsum Express and John Wight to make an assault on the World of Outlaws Morton Buildings Late Model Series in 2007. Fuller was incredibly fast out of the box and picked up the 2007 Rookie of the Year honors.

After leaving the Gypsum team, Fuller attempted to follow the Series full-time on his own budget. Unfortunately, Fuller had a cold spell that sapped the new operation’s funds.

Fuller left the tour in 2012 and began racing his Big Block Modified more again in the Northeast, although he continued to catch select World of Outlaws races until 2015.

The Watertown, NY-driver did not leave without making a mark though. Fuller is tied for thirteenth on the all-time Fast-Time Award list. He’s tied with Clint Smith in Heat race wins. The pilot of the #19 also had the third-most Fast-Time Awards in one season with 12 in 2009.

Another notable driver who returned to the seat of a Big Block Modified after dabbling in other forms of motorsports is perennial NAPA Super DIRT Week contender Jimmy Horton. He was a double-threat when he rolled into tracks with both a Modified and a Sprint Car in the tri-state area and on the Super DIRTcar Series trail.

But then the high banks of Daytona International Speedway called to The Sensational One and he heeded that call.

Between 1988 and 1995, Horton scored eight ARCA Menards Series victories including five out of eight races he entered in 1990. Although Horton struggled in the upper echelons of stock car racing, he made a definitive mark on ARCA. Due to his ARCA success, he was picked to sub for an injured Darrell Waltrip in the Junior Johnson-owned car but never landed a full-time ride.

Others have gone to the big track looking for success, such as eight-time Series champion Brett Hearn and 1986 Series champion Charlie Rudolph. Hearn finished tenth in his very first NASCAR Xfinity Series start in 1985 at Dover International Speedway but was unable to replicate that success in later starts.

More Super DIRTcar Series drivers who have found success outside of the Big Blocks include Tim McCreadie, who has had a superb Dirt Late Model career; Mike McLaughlin, who found success at NASCAR’s pinnacle; and the NASCAR Truck Series’ newest star, Stewart Friesen.

All of these drivers can agree on one thing: Big Block Modifieds are irreplaceable.