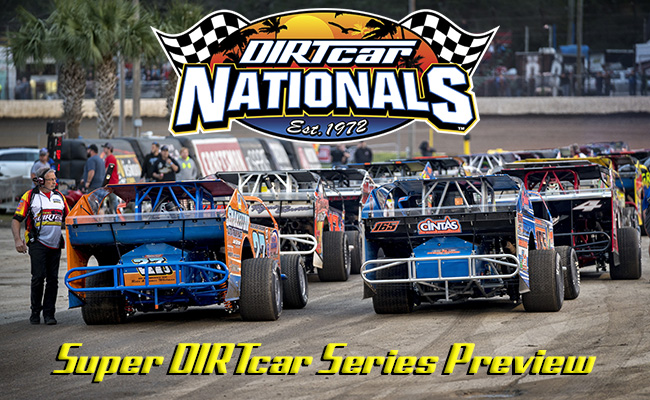 CONCORD, NC – January 22, 2019 – To fans of the Super DIRTcar Series, February means one thing: The DIRTcar Nationals are about to begin. From February 12-16, the Big-Block Modifieds will tear around the world’s fastest half-mile, Volusia Speedway Park, in Barberville Florida. Many of the best Big-Block Modified drivers have committed to full-time Super DIRTcar Series schedules in 2019, and the DIRTcar Nationals is the first opportunity for the Beasts of the Northeast to test their mettle against the competition. Fans from all over the country descend on the Floridian clay oval to take in the best dirt track racing in the world, all in one place.

For the eighth time, Matt Sheppard tows south to the DIRTcar Nationals as the defending Super DIRTcar Series Champion. Last year in Florida, Sheppard started out slow, but managed to grab one win out of four races completed. Meanwhile Tim McCreadie took home The Big Gator last year, but he is concentrating on his Late Model program in 2019. That leaves the door open for a wily veteran or young gun of the Series to take DIRTcar Nationals bragging rights.

An intriguing mix of drivers are southbound this year. Danny Johnson, Billy Decker, and Pat Ward carry the flag of the old guard. Meanwhile Stewart Friesen, Erick Rudolph, and Mat Williamson bring their A game to the great southern peninsula. Greenhorns Demetrios Drellos, Jack Lehner, and Kyle Coffey hope to make their names known far and wide with a victory or two. Will there be another surprise winner like last year’s first time Gator-winner Tyler Siri?

The Super DIRTcar Series silly-season was in full force this time around. Billy Decker, from Sydney, NY, has returned to the Gypsum Racing team alongside Pat Ward and Larry Wight. This formidable team enter the DIRTcar Nationals en masse with all three drivers competing for this year’s Big Gator trophy. Also, Peter Britten has left Graham Racing and will field his own equipment on the Series trail.

Ransomille, NY’s Erick Rudolph hopes to start his Championship campaign on a high note. Although the DIRTcar Nationals do not award points, the momentum a driver can gain from bringing home some Gators is undeniable. Last year Rudolph finished in Matt Sheppard’s wake in Super DIRTcar Series points, but he edged him out for the 2018 Land of Legends Track Championship.

Danny Johnson finished the 2018 season with a strong fourth place finish in points. The Doctor reeled in three top-five finishes in last year’s DIRTcar Nationals. This year he returns with a new team, Graham Racing, who switched chassis to TEO Pro Car for 2019.

A host of invaders are making their way down to Florida for a chance at a Big Gator. The legendary Billy Pauch and his bright yellow hand-painted no. 1 Big-Block Modified is always a threat for victory. Race fans should be on the lookout for Pennsylvania standout Rick Laubach, who competed in a pair of Super DIRTcar Series events in 2018. Ryan Godown would normally fall into the category of invader, but the exciting New Jersey star announced that he will run full-time on the Super DIRTcar Series trail.

The Super DIRTcar Series is pleased to see the commitment DIRTcar has made to safety at Volusia Speedway Park. New walls and catch fencing have been installed during the offseason to ensure the safety of drivers and fans alike.

Head over to the DIRTcar Nationals website to get your tickets now while they last. There are twelve nights of racing featuring UMP Modifieds, World of Outlaws NOS Energry Drink Sprint Cars, World of Outlaws Morton Buildings Late Models, and DIRTcar Late Models racing February 5-16 and race fans will not want to miss a lap.

If you can’t make it to the track, you can catch all of the DIRTcar Nationals action on DIRTvision in its entirety. They will also provide a free live audio stream of each night’s racing action.