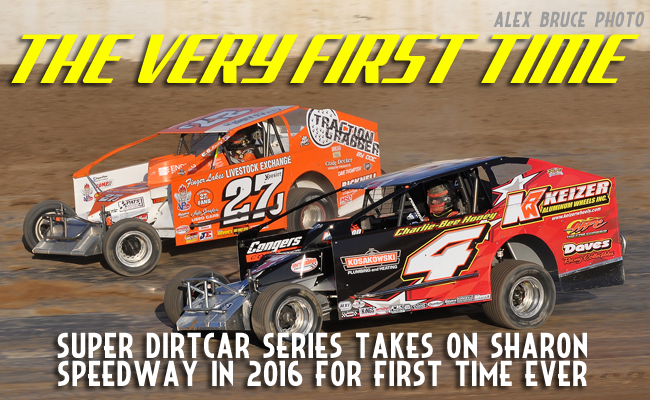 The race will attract drivers from all over the Northeast and East Coast to take on the region’s best. In 2015, Matt Sheppard was crowned the Super DIRTcar Series champion over Billy Decker, Jimmy Phelps, Larry Wight, Brett Hearn, Danny Johnson, Pat Ward, Tim Fuller, Stewart Friesen, and Peter Britten. Most of those racers and many others will be on hand in this full points paying event. For more information on the Series, check out their website at www.superdirtcarseries.com.

While the Renegades of Dirt Modifieds have made a few regional appearances over the past couple years, July 21 will mark the Sharon debut of the traveling West Virginia-based group that enters their sixth year of operations. The RoD Mods will race for $1,500 to-win on July 21 in a weekend doubleheader with Lernerville the following night. Their appearance at Sharon will be their first of two as they’ll return for the “Apple Festival Nationals” on September 16-17.

The Summit Racing Equipment (E) Modifieds have been a weekly division at Sharon since 1996 as Alan Dellinger leads the all-time win list at 87 victories. The Sharon locals along with the region’s best will take on the RoD invaders. Derrick Ramey was the 2015 RoD Champion. For more information on RoD, check out their website at www.renegadesofdirt.com.

Reserved tickets will be available for this event in the near future. Ticket prices and times will be announced soon. Stay tuned to www.sharonspeedway.com and social media for the latest.

The 87th anniversary season at Sharon will begin with the twice rained out night two of the “Apple Festival Nationals” from 2015 on Saturday, April 16. There will also be an open practice on Friday, April 15. Following the Lucas Oil/RUSH Late Model event on April 22, weekly racing will get underway with “Steel Valley Thunder” on Saturday, April 30. A big season is in the works, stayed tuned throughout the winter months for updates.

Sharon Speedway is owned by the Blaney, Weller, and Kirila Families and is a 3/8-mile dirt track located on Custer-Orangeville Road in Hartford, Ohio near the intersection of Routes 7 & 305. For more information, check out the website at www.sharonspeedway.com or call 330-772-5481. Become a fan of Sharon Speedway on Facebook at www.facebook.com/sharonspeedway and follow us on Twitter at www.twitter.com/sharonspdwy.