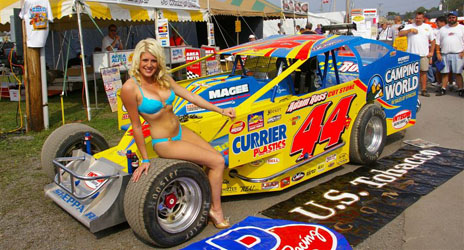 They share in common the same hometown of Waterloo, New York and a collegiate experience at the Rochester (NY) Institute of Technology, with each taking full advantage of a career opportunity that came their way in the year 2004.

“I never met (Coughlin) but I’m still a big Giants fan and it was great to see them win again,” said Sheppard, 25, a Waterloo native now residing in Albany to be close to the Ross Motorsports shop in New York’s Capital District. While Waterloo High School (1964) alum Coughlin coached football at RIT from 1970-73, ‘Super Matt’ earned his Mechanical Engineering Technology degree in 2006 from the Flower City facility. 2004 marked Coughlin’s latest hiring by the Giants’ front office as well as Sheppard’s inaugural season behind the wheel of owner Randy Ross’ high-profile Big-Block entry.

When the 37th Annual Alltel DIRTcar Nationals at Volusia Speedway Park kicks off the Big-Block Modified portion of its schedule next week, Sheppard will be back aboard the potent Ross Motorsports no. 44s Adam Ross Cut Stone-Magee Transport-Seneca Auto Sales machine hoping to begin that elusive championship run. It will be a Super Series ‘Tribute’ sculpture in place of the Super Bowl ‘Lombardi Trophy’ that will be the top prize on his own agenda for DIRTcar’s 2003 Big-Block Rookie of the Year.

“We missed a lot on the set-up last year at Volusia so I’m anxious to get back out and try a few new things with the car,” noted Sheppard, who will be buckled into an ’08 Bicknell mount picked up last August from the St. Catharines, Ontario chassis builder. “I just couldn’t get the car to turn all week. It’s a big, wide track that’s pretty fast and if your car is handling good it’s a lot of fun getting around. Whatever happens, its still nice to get out of New York this time of year.”

The Advance Auto Parts Modified mini-series includes three 30-lap main events with a 50-lap finale closing out the ’08 trip, February 13-16. An optional practice is reserved for Tue., Feb. 12. Ross Motorsports will be looking to improve on a seventh-place showing in last winter’s Alltel DIRTcar Nationals standings in Sheppard’s third-ever trip to VSP.

“I’ll be back home trying to sew up some loose ends,” added car owner Ross, who was recognized at the DIRTcar NE Banquet last November with a special achievement award that commemorated his 20th Anniversary of Big-Block competition. Ready to open their fifth straight season together, Sheppard continues the winning tradition for Ross Motorsports, having already scored 27 DIRTcar Big-Block Modified feature wins with four registered in the highly competitive Advance Series where he has placed among the top-10 in the overall Mr. DIRTcar Modified standings every year — 7th-2007, 8th-2006, 5th-2005, 6th-2004.

“Right now I’m just hoping to get the program together and keep it going. What happens in the next two weeks will probably determine our plans for the rest of the year. We’re looking at a few options but its just too earlier to take a solid stance in any one direction. Following the Advance Series is still our primary goal,” Ross said.

Reserved seat tickets for each night of the Alltel DIRTcar Nationals can be purchased by going online at www.VolusiaSpeedwayPark.com. For those unable to attend any of the shows in person, all the action can be seen on the DIRTVision Cybercast. For just $29.99 fans can purchase the ‘Alltel DIRTcar Nationals Racepass’ and watch live streaming video of all 12 nights of racing from Feb. 5-16. Please log on to www.dirtvision.com for more information.