WEEDSPORT, NY – Big Blocks are being tuned to perfection across the Northeast. The first whiffs of VP Racing Fuel are hitting noses and brand new Hoosier Racing Tires are getting loaded up in preparation for the Super DIRTcar Series tour to begin this Saturday, April 10, at Can-Am Speedway.

Seventeen elite drivers are going full-time championship points chasing in 2021. Twenty-seven races stand between the best of the best in Northeast dirt modified racing with races in New York, Pennsylvania, New Jersey, Tennessee, North Carolina, Quebec, and Ontario. These 17 drivers will fight over a $123,000 point fund with $40,000 going to the champion. 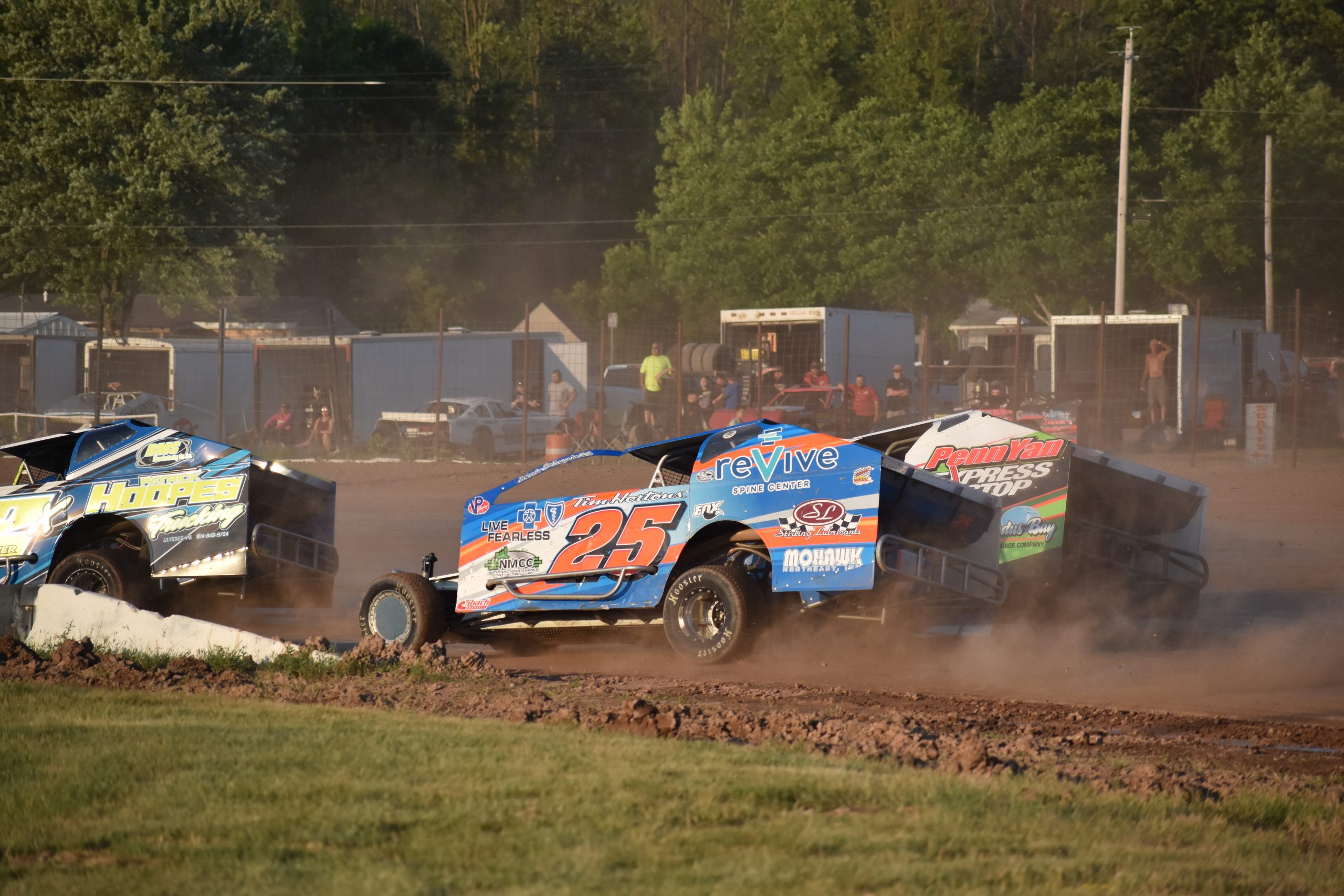 Mat Williamson, the longest-term defending champion [no champion in 2020] on record, finally begins his title defense. Despite the delay, the Canadian-born driver and his #88 Buzz Chew team are primed for the points opener at Can-Am Speedway.

Williamson has separated himself as a driver by not only winning big-money signature races like the Billy Whittaker Cars 200 at NAPA Super DIRT Week, but he’s also a champion. He knows how to play the long game in both races and seasons.

Matt Sheppard is a seven-time Super DIRTcar Series champion. He wins. He podiums. And, most importantly, he finishes. Sheppard, from Waterloo, NY, is a ferocious competitor, who demands the best from himself, his equipment, and his peers at every race.

He is keen on claiming this his eighth Super DIRTcar Series championship in the #9S this year. While the DIRTcar Nationals in February was an up-and-down affair for Sheppard, it’s difficult to draw a bead on the season based on his performance there. Especially when the #9S team likes to try new ideas at Volusia – a non-points event for the Series.

While Anthony Perrego took the win at Can-Am last year during DIRTcar OktoberFAST presented by DIRTVision, Sheppard has the last Thunder in the Thousand Islands 100 win at the La Fargeville, NY track when he opened 2019 in Victory Lane two years ago. With two huge points opportunities coming up back-to-back at Bristol, Sheppard knows it’s important to go there full throttle.

Billy Decker defines speed and confidence on track. He’s won three Series championships but remains hungry for a fourth. His Gypsum Racing #91 Big Block is always at the top of the boards.

Decker was held winless at this year’s DIRTcar Nationals but he piled on the podiums nonetheless to be second on points behind Max Mclaughlin. He’ll be after career Series win number 71 at Can-Am this Saturday to start his quest for a fourth championship.

This year is another busy year for the HBR pilot Jimmy Phelps as he once again tackles the Series full-time while promoting Weedsport Speedway. Phelps’ #98H had a strong 2020, which included an OktoberFAST win at Fulton Speedway.

Phelps, The Baldwinsville Bandit, is currently tied for sixteenth on the all-time wins list alongside Kenny Brightbill and Gary Tomkins.

Phoenix, NY’s Larry Wight, also known as Lightning, is tied with Dave Lape on the all-time wins list with eleven, including a coveted $50,000 win at Oswego Speedway’s NAPA Super DIRT Week in 2018.

The crimson #99L can often be found pushing the envelope of the high side at most tracks, thrilling fans, and passing drivers. Wight has accomplished a lot in his young career but a Super DIRTcar Series championship still eludes him.

Pride of Ransomville, NY, Erick Rudolph, nearly won the Series championship in 2018, giving Matt Sheppard the biggest run for his money in a few years as the points came down to the World Finals at The Dirt Track at Charlotte. With eight career Series wins to his name, he wants to push that number to double digits in 2021.

Rudolph showcases his skills weekly at Ransomville Speedway in his DIRTcar 358 Modified where he meets the likes of Mat Williamson and Pete Bicknell every Friday. The third-generation driver is not only adding to his family’s legacy but building his own storied career.

He had three top-10s in four starts at the DIRTcar Nationals, a slow start by his standards. But there’s a good chance the calm, cool, and collected driver of the #25R will find his way to the front at Can-Am. 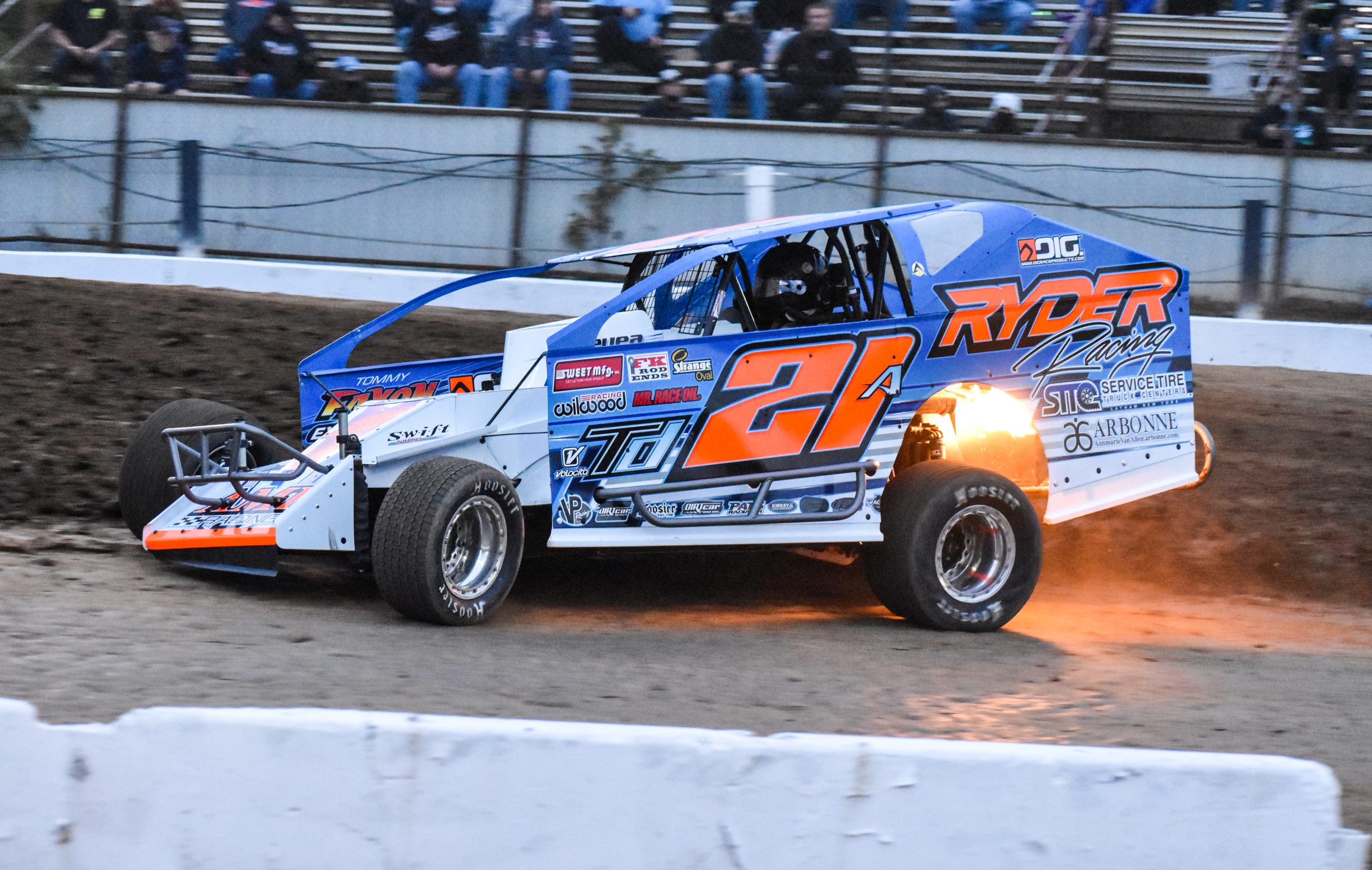 Mike Mahaney and his #35 Huttig-owned Big Block Modified have become a great match over the last couple years. Mahaney was contending at every single DIRTcar OktoberFAST event last October. His momentum coming into 2021 is stronger than ever.

Jack Lehner, from Saratoga Springs, NY, is working hard to build his race team from the ground up. Lehner, a regular front runner at Albany-Saratoga Speedway, is looking to take the next step with his #2L Big Block in the Series.

In 34 starts, Lehner has picked up three top-10s and one top-five. The blue #2L first entered race fans’ radars when he won the Last Chance Showdown at Oswego Speedway to make the 2018 Billy Whittaker Cars 200.

Peter Britten, the driver of the #21A, gained a lot of momentum for the 2021 season after a recent chassis manufacturer switch. Britten now has a Bicknell beneath him for the first time in his career. The veteran driver will hit a milestone 200 Super DIRTcar Series starts in 2021.

The Queensland, Australia driver cuts his teeth weekly at Lebanon Valley Speedway and Albany-Saratoga where the fields include many other Series stars. He’s poised for a strong 2021 season.

Marcus Dinkins is back in 2021 for another full-time effort in the Series. Dinkins, from Watkins Glen, NY, showed promise in Volusia at the DIRTcar Nationals with strong qualifying efforts and competing in every feature lap. The #17 is looking to continue improving in the new season. 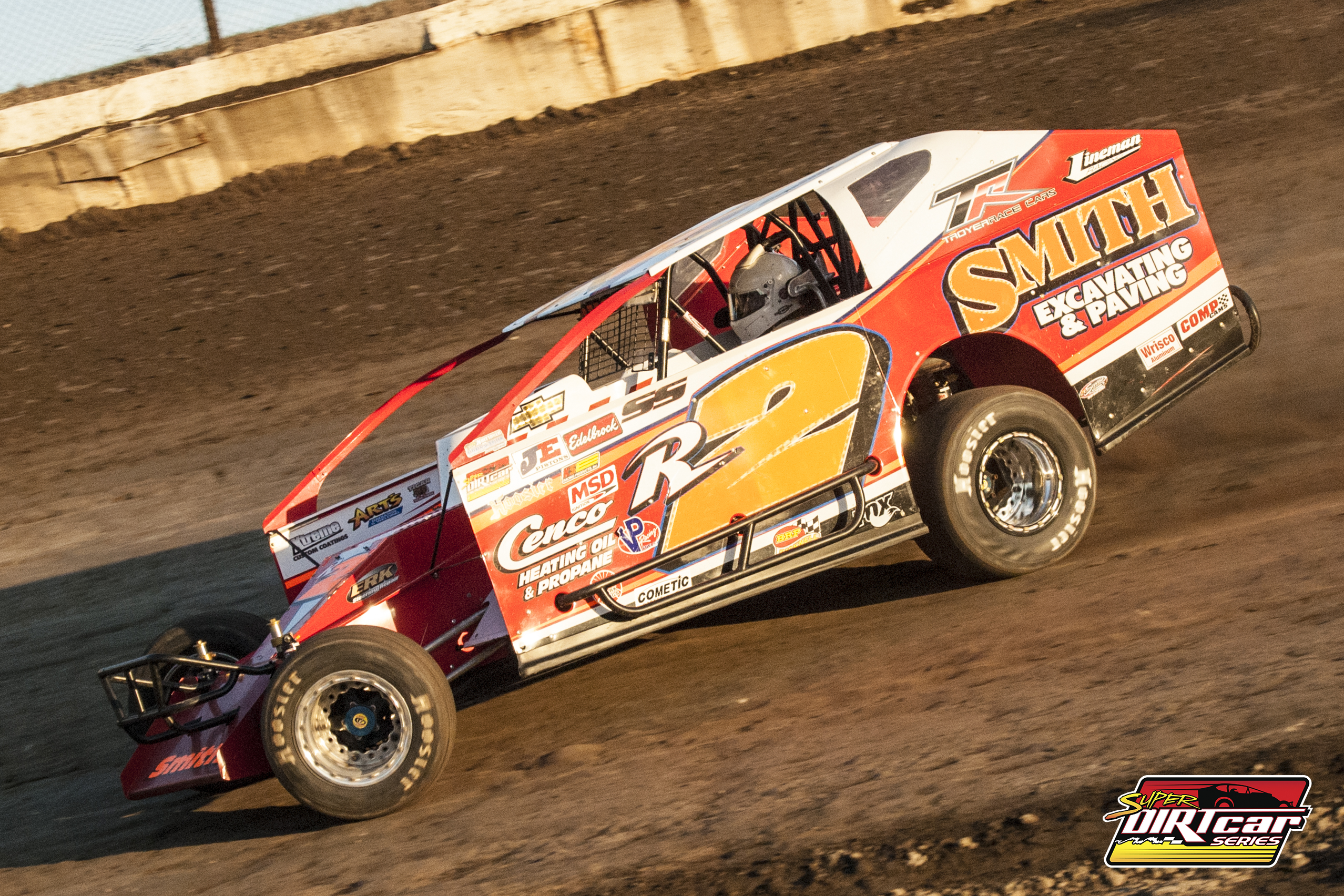 Dave Rauscher, known as The Big Show, has become a fan favorite to root for with his hard-working attitude every race day and gleaming smile. He’ll be aiming to turn the show of passion into results this year and park his #48too in Victory Lane.

Long-time racer and builder of the original Bridgeport Speedway Rusty Smith is back on the tour after taking most of 2020 off during the pandemic. With some new chassis lined up, Smith is looking for his first top-10 in Series competition. 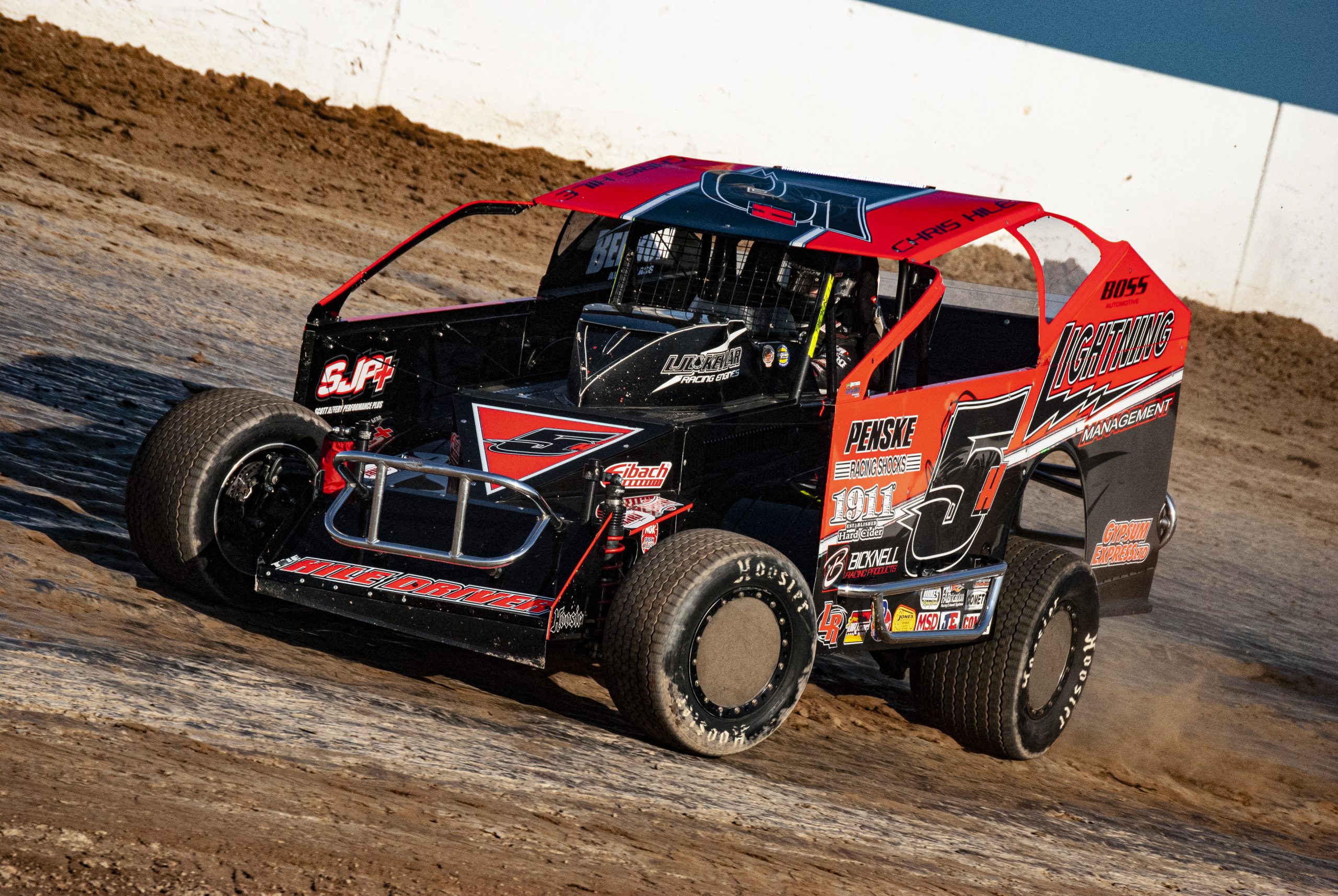 The Hile Driver, Chris Hile, had to postpone his rookie season on the tour last year – due to the pandemic, but he is looking forward to putting his team to the test in 2021. Hile has always been a high-level competitor when entering one-off events. Race fans should be excited to see how the #5H handles a full-season with the stats he’s collected, so far.

Hile has hammered down two top-five finishes, 14 top-10’s, and over 50 starts in Series racing.

Kevin Root has proven himself to be one of the top rookies to watch in 2021. Root, a multiple-time DIRTcar Sportsman Modified champion, will take on the Super DIRTcar Series full-time in the famed #4*. Some of the best drivers, like Tim McCreadie and Brett Hearn, have been behind the wheel of Vinney Salerno’s Big Blocks.

Root is ready to take the spotlight in his rookie year and keep the #4*’s winning ways alive.

The 2017 Rookie of the Year Brandon Walters, from Sydney, NY, returns to the Series in 2021 and is also looking to crack the top-10 for the first time. He has 28 Series starts. Brandon has been itching to get back on the Series, especially with, newly DIRTcar sanctioned, Thunder Mountain Speedway – which he calls his home – one of the 27 events on the 2021 Super DIRTcar Series schedule (Tuesday, Aug. 3).

Olden Dwyer will be a new face on the full-time circuit this year. The Shaftsbury, VT driver has two Super DIRTcar Series starts and has earned one top-10, which came at his hometrack, Lebanon Valley Speedway, in 2015. He’ll take on the stars of the Series behind the wheel of his #88JR Big Block.

PrevPreviousTALE OF TWO HATS–PART II: Phelps shares stress, reward, of being a promoter
NextWHAT TO WATCH FOR: The Nasty Track Can-Am Speedway Kicks Off the Super DIRTcar Series Points SeasonNext