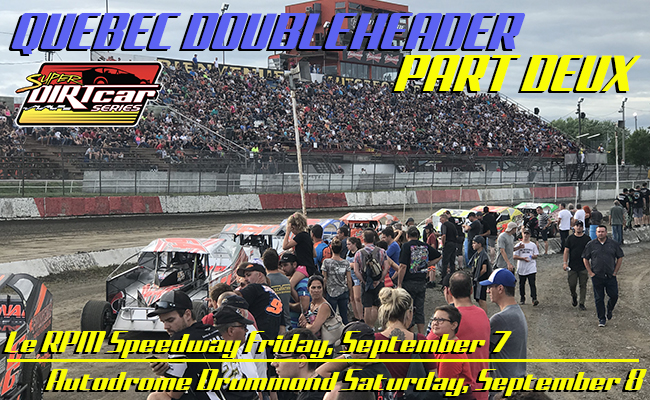 CONCORD, NC – August 14, 2018 – In September, the Big-Block Modifieds of the Super DIRTcar Series will shake and rattle the Canadian province of Quebec for the second time in 2018. The Series returns to Le RPM Speedway for the third time in the track’s short history on Friday, September 7. The next day, Autodrome Drummond hosts the Series for its second 100-lap main event this season. The Blackout Race takes the green flag on Saturday, September 8 and rounds out the Series’ forays into Quebec for 2018. Defending Series Champion Super Matt Sheppard scooped up the win earlier in the year at the Drummondville speedway.

It’s been all Matt Sheppard at Le RPM Speedway. He’s won the only two Series races at the new facility. Sheppard, a master of throttle control, knows how to get around short slick tracks. It will take a supreme effort from a rival like Erick Rudolph, Jimmy Phelps, or Max McLaughlin to topple the reigning Champion. Danny Johnson, too, is surging in the points battle, so fans should keep an eye on the new Graham Racing 21J car to make a move to the front of the pack.

Le RPM Speedway also comes with a challenging fleet of local favorites. Steve Bernard, Michael Parent, and Guy Hebert race at the track weekly and may be looking to steal one from the Super DIRTcar Series regulars. Bernard has come close already in 2018, placing third at Cornwall Motor Speedway, another challenging quarter-mile bullring.
A full card is on the schedule at Le RPM Speedway, with the DIRTcar Pro Stocks in town for a 50-lap feature race, along with other local support classes, the Lightning Sprints, SpeedSTRs , and Slingshots.

On Saturday, September 8 the lights go out at Autodrome Drummond for The Blackout Race. Who will break Sheppard’s stranglehold on Series races in Quebec? Erick Rudolph, second in points, came out of the first swing through the French-Canadian province with two third place finishes. The third-generation driver of the no. 25 has come out strong and prepared for each and every race on the schedule this year, and has proven to be a serious contender for the Championship.

HBR Motorsports’ Max McLaughlin and Jimmy Phelps are right in the points hunt as well, running third and fourth respectively. McLaughlin has found Victory Lane in weekly home track competition, but has yet to take a checkered flag in a Super DIRTcar Series race. Brett Hearn has the most Series wins (8) at Autodrome Drummond and has picked up the pace in recent races. Perhaps the famous no. 20 will carry its wily veteran pilot to Victory Lane once again and break Sheppard’s spell over the north country.