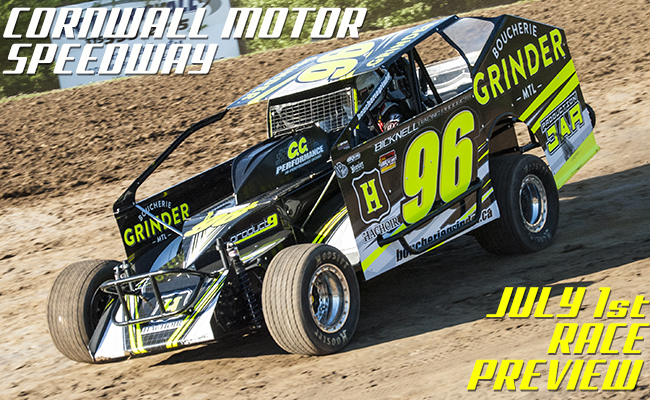 CONCORD, NC – June 19, 2018 – The Super DIRTcar Series’ first foray into Canada of 2018 will take place on July 1, 2018 at Cornwall Motor Speedway. Since 1994, the Series has visited Cornwall 23 times. Brett The Jet Hearn sits on top of the all-time Series wins list at the quarter-mile Ontario oval with five checkered flags to his credit. The points race is on with Matt Sheppard and Jimmy Phelps battling to stand at the top. As of the June 16 race at Brewerton Speedway, Sheppard has one win and a fifth-place finish, while Phelps has been Mr. Consistent with two third-place finishes.

In last year’s race, Sheppard outdueled Billy Decker in the late stages of the 100-lap Feature. The leaders slid in and out of lapped traffic until Sheppard snookered Decker and picked up his tenth win of 2017. Will he continue to count off wins in 2018 on the quarter-mile bullring, or will Billy Decker take his revenge on the no. 9s? Max McLaughlin would also like to capture a trip to Victory Lane in the first half of the season as well. The HBR no. 6H has been running strong since 2017 but has yet to take a checkered flag in a Series race.

Five-time Cornwall Motor Speedway Super DIRTcar Series winner Brett Hearn needs to turn up the dial on 2018 to stay in the hunt for the Championship. As of this writing, Hearn has punched out a 10th place finish at the Heroes Remembered 100 and took a 18th place finish at Brewerton Speedway so far this season. With 800+ Feature wins under his belt, it’s only a matter of time before The Jet lifts off.

In 2010 The Hurricane Steve Paine set the current track record with a 12.875-second lap. The Big-Block Modified pilots of the Super DIRTcar Series will aim to take that record down in Time Trials to secure a Billy Whitaker Cars & Trux Fast-Time Award. That award’s namesake, Billy The Kid Whitaker, was forced to miss the Showdown at Sundown 100 due to illness. The Super DIRTcar Series looks forward to his return to the tour in good health.