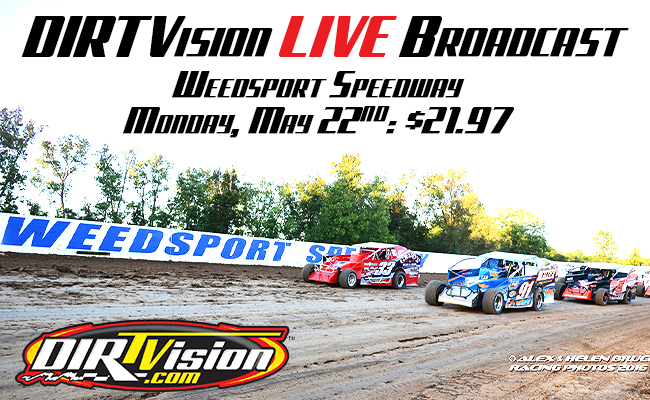 CONCORD, NC – May 15, 2017 – The Super DIRTcar Series will make its first of three visits to Weedsport (NY) Speedway on May 22 for Big-Block Monday. The takeover of the pristine 3/8-mile oval marks the third points event on the Series’ 2017 schedule.

The grounds of Weedsport Speedway are home to Heinke Baldwin Racing teammates Jimmy Phelps and Max McLaughlin. Now in his second full-time season with the Super DIRTcar Series, the 17-year-old McLaughlin is chasing his first career win on the tour. McLaughlin, who works out of the HBR shop and at the track at Weedsport, knows every inch of the world-class facility. Literally.

“I painted all of the walls at the racetrack Thursday,” McLaughlin said. “We’re working on the track to make it the best possible for the fans.”

McLaughlin’s familiarity with the track could be the advantage he needs to secure his first Series triumph.

“Every race is important to us,” McLaughlin said. “We look at it the same way: we have to unload fast, qualify well, race well and finish well. We’re going into every race, whether it’s a series race or a weekly race, with the same mindset. We’re here to win.”

Fans who can’t make it to the track will be able to watch what is guaranteed to be another ultra-competitive event live on DIRTvision. The Series saw three different winners in its three stops at Weedsport in 2016. Defending series champion Matt Sheppard visited Victory Lane along with Gary Tomkins and Danny Johnson.

Four different drivers have won in five Series races since the track underwent major renovations in 2014. Sheppard is the only repeat winner. Side-by-side racing happens naturally at Weedsport, which helps create the parity, McLaughlin said.

“It’s a tight racetrack,” McLaughlin said. “Everybody’s aiming for the bottom in [turn] one, but coming out of the corner you have a bunch of different grooves. You can race side-by-side at Weedsport pretty easily. It’s a really racey track.”

The recent renovations at Weedsport have made it a state-of-the-art dirt track recognized across North America. The track’s LED lighting system, open concourse area and live video board have made it a fan favorite racing destination and the drivers have taken notice of the full grandstands, McLaughlin said.

“Every big race you come to, the fans are packed in,” McLaughlin said. “That’s awesome in itself. For a local short track like Weedsport to have that many fans, it means a lot not only for the track, but for the sport. I think [the facility] brings in a lot of people who aren’t racing fans and makes them racing fans.”

Two-day advanced reserved tickets for the World of Outlaws Craftsman® Sprint Car Series Empire State Challenge on May 21 and the Super DIRTcar Series Big-Block Monday on May 22 are available online at www.weedsport.com/tickets.

Fans who can’t make it to the track can watch LIVE pay-per-view of both the Empire State Challenge and Big-Block Monday at www.dirtvision.com.