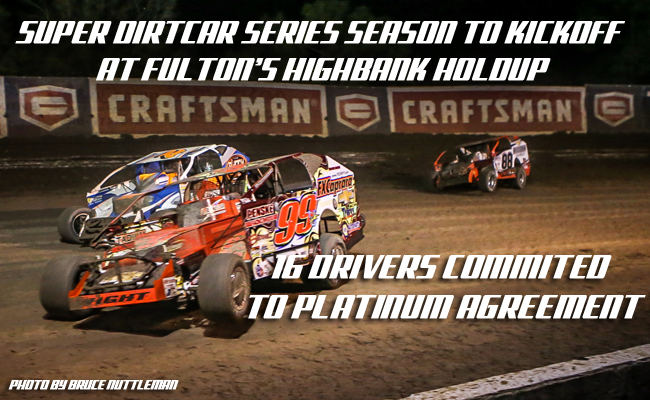 CONCORD, N.C. – April 5, 2017 – Two months following a pair of tune-up races during the DIRTcar Nationals at Volusia Speedway Park in Florida, the Super DIRTcar Series will kickstart its 2017 points chase with the Highbank Holdup 100 at Fulton Speedway on April 29.

“Anytime you can get a win it makes you feel good,” Decker said. “Last year, I think it was important to come out of the box strong. It’s a Super DIRTcar Series race, and we take pride in winning those races.”

Fulton has hosted the series on 11 occasions, dating back to 1999. Decker leads all drivers with four series wins at Fulton and is fifth on the track’s all-time wins list. Fulton is one of the most action-packed tracks on the tour and as the season opener, there’s plenty of reason to be excited, Decker said.

“In an extra-distance race. If your car is going, sooner or later you’ll get to the front,” Decker said. “It’s stop-and-go on the bottom, and it’s momentum on the top. It just lends itself to good racing. That’s why there are big crowds there. It’s a track that has a lot of action.”

Dale Planck is the last driver besides Decker to win a series race at Fulton. That victory came on October 4, 2010, when Matt Sheppard also set the single-lap qualifying track record of 15.549 seconds.

Tim Fuller has picked up a new ride for the 2017 season. The Watertown, NY driver will compete as part of the Ray Graham Racing team but will maintain his familiar black and orange No.19 as he looks to improve on his second-place finish at last year’s Highbank Holdup and a third-place points finish from the 2016 season.

Last season’s championship runner-up Stewart Friesen of Sprakers, NY has signed on for the 2017 season, adding to a busy NASCAR Camping World Truck Series schedule. Friesen hopes to improve one position in the 2017 standings in order to secure his first Super DIRTcar Series championship.

Sussex, NJ pilot Brett Hearn got off to a quick start in 2017 with a victory at the DIRTcar Nationals for the third straight year. Hearn is eager to use his Florida success to push for another early win to end a winless streak in Series points races that dates back to 2014.

The Super DIRTcar Series will have a true rookie-of-the-year battle between Potsdam, NY native Mike Maresca and Brandon Walters of Unadilla, NY as both drivers have committed to running the full tour. Maresca has spent several seasons racing 358 Modifieds at Mohawk and Cornwall Speedways, but has jumped into a Big-Block Modified over the past two seasons. Walters, meanwhile, earned Big-Block Modified rookie-of-the-year honors at Fonda Speedway last season.

A number of local favorites will look to defend their home turf against the invading Super DIRTcar Series drivers, including Tim Sears Jr. and Ryan Phelps, who finished in the top-five in track weekly points last season. Chris Hile, also a Fulton regular, will look to continue where he left off at Fulton in 2016 after he earned a spot in the NAPA Auto Parts Super DIRT Week event at Oswego Speedway with his win-and-you’re-in victory last October.

The season opening Highbank Holdup 100 for the Super DIRTcar Series at Fulton Speedway on April 29 is scheduled to kickoff at 5:00pm. Additional event information is available at www.SuperDIRTcarSeries.com or www.fultonspeedway.com.