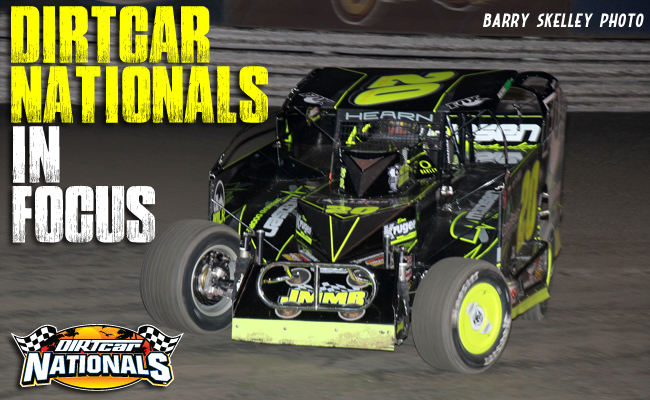 The series rolls into DIRTcar Nationals on Wednesday

BARBERVILLE, Fla. – Feb. 11, 2016 – The Super DIRTcar Series schedule has taken on a new look for the 2016 season and it’s one that has its touring drivers and DIRTcar Northeast’s Mike Perrotte excited about the challenges awaiting them. “This year’s schedule has generated a ton of interest,” stated Perrotte, “and we are ready to deliver a superior dirt racing experience for all of our fans.”

With the top Big-Block Modified point drivers from last season committing themselves to this year’s program, as well as a couple of new followers, the title could belong to anyone at season’s end. For most of the past decade the Mr. DIRTcar title has been a contest among the same three drivers-four-time SDS champion Matt Sheppard, three-time SDS champion Billy Decker, and eight-time SDS champion Brett Hearn.

Before the season even began, the 2015 Series champion, Matt Sheppard, and the second place finisher in points, Billy Decker, were each dealt the blow of being informed by their team owners they needed to look elsewhere for 2016. Speculation was rampant as to what each driver would do for the upcoming season.

“The title is definitely up for grabs this year. We have veteran drivers who are ready and determined to become the title holder, as well as several new full-time drivers to the Series,” stated Perrotte, “…I think it’s going to be an exciting and challenging year for us.”

Generating the most discussion among the teams and fans is the return of the Big Block Modifieds to the famed Eldora Speedway, in Rossburg, Ohio. Track General Manager Roger Slack, known for his extravaganza approach to event planning, assures fans the trip to Eldora for July 19 and 20will be one to include on their bucket list for 2016. “We will be honoring the tradition of the Super DIRT Series races,” stated Slack. “Eldora has gone through a lot of changes since the Modifieds were here last (2006) and this is a chance for the SDS to be part of one of the biggest nights of dirt racing.”

The Eldora race dates will pair the Big Blocks with the annual visit to the track by the NASCAR Truck Series and it is expected the Series regulars will be joined by many other Northeast teams who are planning to attend. “(The Modifieds) are my favorite division in racing and hold a special place in my heart,” said Slack, “and the two divisions will complement each other.”

Veteran Matt Sheppard, 2015 SDS Champion, is ready for the Super DIRTcar Series to begin. For 2016 Sheppard will be operating as an independent team with Randy Kisacky and Jamie Beachy, long-time HBR team members, joining his team and making for a potent combination. “The same cast of characters is with me this year and we are ready to go.” When asked about the trip to Eldora he stated, “Any time you can go to a high profile track (like Eldora, Sharon and Williams Grove) it is a plus for us.”

That sentiment was echoed by Brett Hearn who said the event will be the highlight of the summer schedule. “It’s the ultimate dirt track in the country,” stated Hearn, “…and it’s been a long time since we have been there. I’m looking forward to it.”

Also on board with the planned Eldora show is 2015 Super DIRT Week winner Stewart Friesen. Planning to compete full-time for the Series title, Friesen sees Eldora as an opportunity to showcase his talents before a broad audience of car owners, teams and fans. The driver of the Halmar International and Jeff Daley no. 44 says he is “looking to improve our chances” to win the title with his Billy the Kid powered Big Block.

Visiting 24 different tracks in five states and two Canadian provinces will prove challenging for the Big Blocks and requires commitment and planning. This year’s schedule will also include Sharon Speedway (OH) and Williams Grove Speedway (PA). While Big Block Modifieds have raced at Sharon in the past, this will be the first time a SDS race has been schedule at the track. Teams will be making this stop, scheduled for Thursday, July 21, as part of their return trip from Eldora.

Williams Grove Speedway last hosted a SDS event in 2006 and their Wednesday, June 22nd date on this year’s schedule will be the second point race of the season, following the April 30th season opener at Fulton Speedway (NY). Albany-Saratoga Speedway (NY) will once again host Brett Hearn’s “Big Show 8” on Tuesday, June 28th.

August 1 and 2 will see the Big Blocks making their return to Merrittville Speedway for the “Bob St. Amand Sr. Memorial” and the “Alex Friesen Summer Nationals” respectively. The always popular “Mr. DIRT Track USA,” hosted annually by Lebanon Valley Speedway, has a change in its traditional date and will be run on Thursday, September 1 this year.

Canadian fans will see the Big Blocks return on June 26 to Cornwall, July 25 and 26 to Autodrome-Granby and Autodrome-Drummond respectively and again on September 10 when Drummond will have their second SDS event of the season and on October 15 at Brockville Speedway for their final event before the season-ending World Finals at the Dirt Track at Charlotte.

For the 358-Modified Series there are nine races scheduled beginning on May 23 at Merrittville Speedway and ending on October 14th at Brockville. The 17 race schedule for the DIRTcar Sportsman Series competitors kick off the season on Friday, April 29 at Fulton Speedway’s “High Bank Hold-Up” and ending on October 15th at Brockville. For this division drivers are able to drop their four worst finishes from races run up through the Brighton Speedway “Applefest” show on Saturday, September 24th. The DIRTcar Pro Stock Series currently has nine events scheduled from June 10th at Autodrome-Granby to their finale at CNYRP during the NAPA Super DIRT Week program on Sunday, October 9.

The veterans such as Sheppard, Hearn and Decker are viewed as always prepared, ready for upcoming seasons and typically the odds on favorites to be in contention for the title when the Series finishes at the World Finals. However, this year there are several new contenders planning a full-time assault on the typical top three as well as veterans who have set their sights on the crown.

Returning to run the SDS full-time will be 358-Modified Super DIRT Week winner Jimmy Phelps in his potent 98h HBR sponsored 2016 Troyer powered by a Bob Bruneau built power plant. “The goal of HBR is to win the championship with the 98h,” stated Team Manager Betsy Angelone. Popular Australian driver Peter Britten says running the SDS is a priority as he is still looking for sponsorship in 2016. “You can run with the big dogs or stay on the porch,” stated Britten.

Returning to the Series full-time will also be LJL Race Team members Pat Ward and Larry Wight. Ward, a long-time racing veteran, has a new Bicknell in his stable as well as the car he ran at the end of 2015 powered by a Kevlar engine. Wight, who serves notice he wants to win every place he runs and is one of the strongest contenders for this season, will be running a 2016 Teo, Gypsum Express Ltd. Sponsored car, powered by Kevlar Racing Engines. Serving as Team Manager for LJL Racing, Inc. a new role for him, will be long-time winning crew chief Scott Jeffries. Jeffries was crew chief for champion Billy Decker for over 20 years.

Planning to challenge for the title is a returning favorite, “The Doctor” Danny Johnson. This year Johnson and team owner Chris Gennarelli like their chances to win several races and the title. “We have two new Bicknell’s and three Enders engines ready to go,” reported Gennarelli, and “we are more prepared for this season.” Returning once again will also be Rich Scagliotta in the Adamsville Maintenance no. 8 which will be a new Teo with engines from CC Racing Engines and Finger Lakes available as their power source.

The question of what would Billy Decker be doing this season after a split with car owners John and Laura Wight of LJL Racing was just recently answered. Decker, a perennial favorite to win, reports he has teamed up with Mike Payne to drive the Page Trucking No. 7z on this year’s Series. He will have a new 2016 Bicknell with a power plant prepared by Payne.

Hearn is anxious to begin the season and to regain the “Mr. Dirt” title that he has owned more often than any other driver. In addition to a late season points penalty, Hearn acknowledges “…we had too many blemishes compared to what Matt (Sheppard) was able to do and his consistency. Matt (running as an independent team) and Billy’s (new team owner) circumstances this year opens the doors for someone else to get through.” Hearn will be running a 2016 Teo Pro as well as his car from last year.

At this time, planning to run only a partial schedule this year due to work and family commitments will be Gary Tomkins, Mark Kislowski and Justin Haers. That could change for Tomkins if he can secure the needed sponsorship to run the SDS.

New to a full-time attack at the Series title will be five heavy hitters-Frank Cozze, Stewart Friesen, Mike Mahaney, Eldon Payne and Mat Williamson. Cozze will be running the no. 35 of George Huttig of Adirondack Auto Sales, Friesen in the no. 44 Teo of Halmar and Jeff Daley, Mahaney in a new 2016 Buzz Chew owned Troyer with Billy the Kid power, Payne will be running a new 2016 Bicknell powered by Billy the Kid, and Williamson in a new 2016 Bicknell powered by Finger Lakes. “Our new drivers can all challenge at any time,” said Perrotte, “and I expect them to win a few races as well.”

When asked to reflect on the 2015 season, Series Director Mike Perrotte felt a strength of the organization was its ability to do a good job of keeping everyone on a level playing field by being consistent in the enforcement of the DIRTcar rulebook. Perrotte stated “drivers need to have their stuff right or be prepared to change it and that begins at Volusia.”

“There is a ton of interest in what we as DIRTcar are doing and where we are going. I’m happy with our schedule and excited about the entire Series and feel the same about our weekly track programs.” He went on to state that the fall Promoter’s Workshop was highly productive due to the efforts of all those in attendance to work collaboratively to the benefit of the organization as a whole.

So, ready or not–and it would be hard to find a DIRTcar team or fan not ready-the 2016 DIRTcar NE racing season is upon us. From the opening days at the Volusia Speedway DIRTcar Nationals to the closing days of the World Finals at the Dirt Track at Charlotte, and every place in between, fans should be prepared for an exciting and highly competitive Super DIRTcar Series.