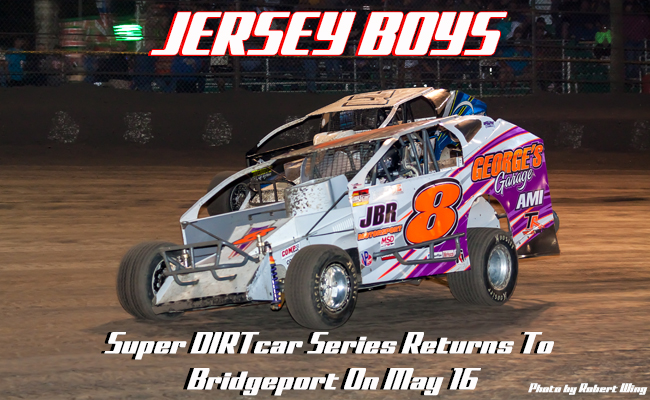 The 60-lap Tuesday night showdown at the Sweedsboro, NJ track is a landmark race not only as the Series makes its return, but also as the 12th and final Friends of Mike event. Bridgeport Speedway General Manager Danny Serrano has promoted the race since 2006 in honor of his late friend Mike Rogie.

Serrano and Rogie became friends while attending New Egypt Speedway as fans. When Rogie was diagnosed with cancer in the fall of 2005, Serrano and his racing friends began planning a race in Rogie’s name.

“I thought maybe we could do something to show him we care about him and put up some money for the drivers in his honor,” Serrano said. “Before you knew it, everybody had heard about Mike, and they wanted to donate. Within two weeks, we had close to $5,000.”

Unfortunately, Rogie’s health deteriorated, and he passed away on the day of the inaugural event held at New Egypt. The race continued in Mike’s name in the years that followed with a barbeque and auction to compliment the annual race.

The event moved to Bridgeport in 2013 when Serrano took on a new position there. Serrano is happy to have honored his friend over the past 11 years and wants to close the book on the event with the best Big-Block Modified drivers.

“I would say this is a fitting way to say goodbye to a great event,” Serrano said. “This is the way I envisioned it, and I’m glad the best dirt Modified drivers are going to be a part of it.”

Bridgeport has hosted the Series 17 times, with Danny Johnson the most recent victor in a 200-lap race in 2005. Hillsborough, NJ-native and series Platinum driver Rich Scagliotta is excited for a chance to race in his home state. Despite the 12-year absence, Scagliotta doesn’t believe the Series drivers will be at any disadvantage when they tackle the big 5/8-mile.

“I think the Series regulars are on their game more than people think,” Scagliotta said. “It’s tough at every series race you go to. All the locals are usually really good and on their game. The guys who race the Series are also really good. It’s the same at Bridgeport.”

Strong finishes are important at every Series race, but a successful night early in the season goes a long way, Scagliotta said. To do so, drivers will have to tame one of the fastest tracks on the tour.

“Smooth is fast there,” Scagliotta said. “Everybody’s fast on the straightaways, but being able to get through the corners is something not everybody can do. There’s guys that have been racing there for a long time, and they’ll be tough to beat.”

Advanced tickets for the Friends of Mike Finale at Bridgeport Speedway, featuring the Super DIRTcar Series, are available for purchase online by visiting www.BPSpeedway.com. All advanced ticket purchases feature a $5 coupon for event merchandise purchased at the track on race day.