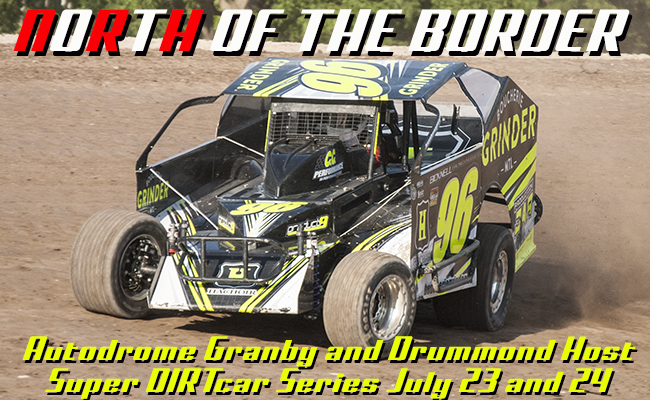 CONCORD, NC – July 11, 2018 – The stars and cars of the Super DIRTcar Series pack up and head north to the Canadian province of Quebec for back to back Series races. The first goes green on Monday, July 23 at Autodrome Granby. The next day, Tuesday, July 24 is the Racing Stock 100 at Autodrome Drummond. These races are expected to draw racers from the exceptional pool of talent in the Quebec region. Last year local hot shoe Steve Bernard took two podiums at each race. Series drivers will need everything they have to pick up Championship points at both great Canadian race tracks.

The Super DIRTcar Series has competed on the half-mile circuit at Granby 26 times in its history. Two-time Super DIRT Week Champion Jimmy Horton won the first two races there held in 1986 and 1987. Since then however, Brett The Jet Hearn has dominated with the most checkered flags, counting six to his credit. Brett Hearn picked up his first Series win of 2018 at Outlaw Speedway and hopes to keep moving up the points standings with a win at Autodrome Granby. Last year Larry Wight took the checkered flag but had to hold off hard-charging local favorite Steve Bernard. Will Canadian turf be successfully defended this year? The Big-Block Modifieds will compete for 100 laps to decide. Admission is $46 dollars and tickets can be pre-ordered on the Autodrome Granby website. DIRTcar Sportsman and Pro Stocks fill out the card.

The next day haulers will file into another great Quebec race track, Autodrome Drummond where the Series has raced 40 times since 1978 when Kenny Brightbill motored to victory. The 1980s at Autodrome Drummond, were dominated by drivers with the last name of Johnson. Seven races out of ten races were split by Jack, Alan, and Danny Johnson. The Doctor Danny Johnson has been streaking lately with a win and multiple podiums. Perhaps he will add his name to the win list at Drummond once again.

Billy Decker holds the Super DIRTcar Series track record at Drummond. He wheeled his no. 91 to a 16.600 lap in 2016. Decker is winless in Series competition so far in 2018 and hopes to turn his luck around. Like Autodrome Granby, Brett Hearn has the most Series wins at Autodrome Drummond with eight. With strong runs at both tracks, Hearn will surely be a factor in the Championship by season’s end.

In 2017 Matt Sheppard steam rolled the competition at Autodrome Drummond on his way to the Series Championship. The podium was filled out by two local heroes, Steve Bernard and Steve Bernier. The Canadian favorites have been knocking on the door of a Series victory over the past two years. Bernard gave Sheppard a run for his money at Cornwall Motor Speedway earlier this year. Will this be the 2018 be year they break through?

General admission is $44. Check out the Autodrome Drummond website for camping information and more.