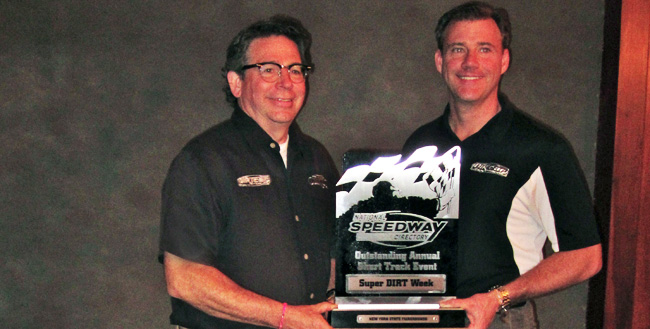 Super DIRT Week’s concrete walls and hard-clayed surface has pushed man and machine to the limit. For more than 40 years it has been a spectacle with race fans sitting through sun, freezing temperatures, rain, or even snow to cheer on their favorite drivers.

“The recipient of this year’s award has been an institution for more than 40 years,” said Tim Frost, publisher of National Speedway Directory. “We are pleased to acknowledge the dedicated efforts of World Racing Group for continuing this tradition.”

The award was presented at the 39th Annual RPM Promoters Workshops during Speedweeks in Daytona Beach, Fla. The three-day workshop included 542 people representing 151 tracks from the United States and three Canadian provinces.

“We are honored to receive this award,” said World Racing Group CEO Brian Carter. “Many months of planning and preparation go into making Super DIRT Week a successful event. It’s a true team effort among all of our staff, sponsors and competitors to put on such a great event for the passionate DIRTcar Racing fans.”

One of the new elements to Super DIRT Week in 2011 was moving Friday events under the lights, generating a huge buzz among fans and media.

“Promoters are rethinking how they promote events, but tradition and legacy remain important,” said Stewart Doty, RPM Workshop organizer. “To draw new young fans, racing must remake itself into a virtual as well as a real sport, and involve itself more effectively in their online world, but stay true to its roots.”

World Racing Group, Inc., a sports entertainment company, is a world leader in the sanctioning and promotion of dirt track auto racing.  WRG, based in Concord, N.C., owns and operates the three highest profile national touring series for dirt track racing in the United States:

National Speedway Directory is an information source for the motorsports industry.  Published annually since 1975, the publication lists information on tracks, sanctions, museums, and events in the United States and Canada.

The Thirty-Ninth Annual RPM Promoters Workshops Series, where promoters meet, network, and share ideas they can use, meets annually in December in Reno, NV and during Speedweek, in Daytona Beach, FL. The Workshops are produced by Racing Promotion Monthly, the idea newsletter for auto racing promoters.