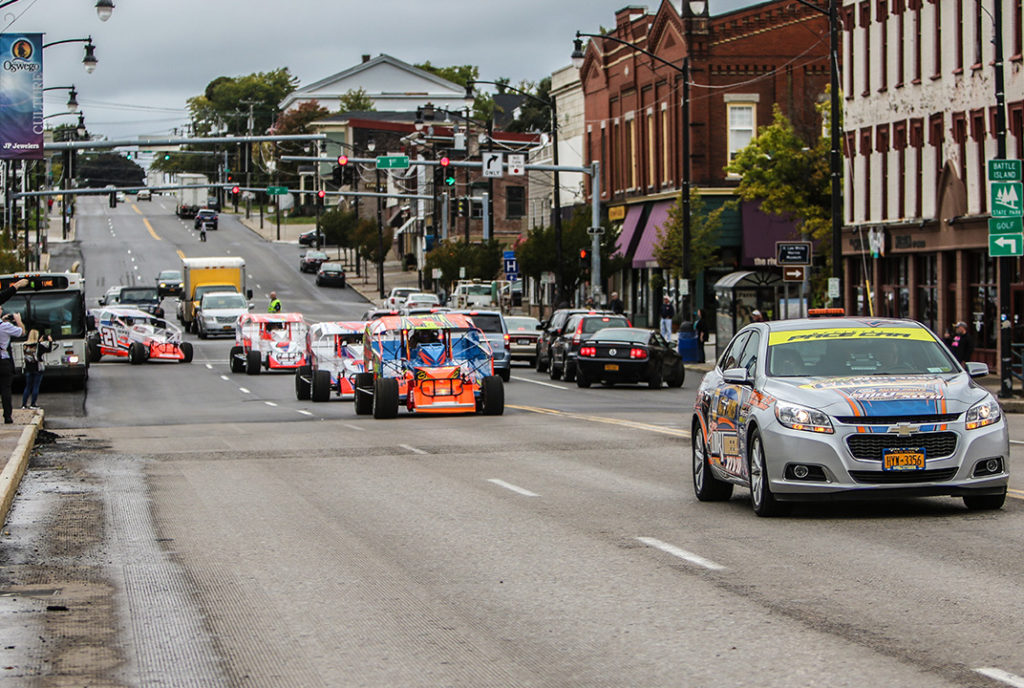 The city of Oswego has a population of 17,000. That number will more than double for a week in October, bringing a welcomed and needed boost to local businesses.

The premier dirt racing event moved from the Syracuse Mile to Oswego Speedway in 2016 and has brought a positive benefit to small businesses in the county, according to Dave Turner, the director of community development tourism and planning for the county of Oswego.

“Typically, there are drivers and visitors from 17 or so states, and some international participation as well… over the course of the entire event they draw thousands of fans and competitors,” Turner said. “It’s a pretty active week throughout the county.

“I think the city of Oswego really feels the boost. It’s pretty significant when you think of food and housing.”

Garafolo’s, on East Bridge Street – four minutes from the speedway – is a small family-owned meat store and sandwich shop that’s been a staple of the Oswego community for years. NAPA Super DIRT Week has been a huge boost for not only them but the city, according to Joe Garafolo. Without the event last year, things were “slow and boring,” he said.

“It’s a huge boost to the economy of our city here,” Garafolo said. “Any time you can bring any people to the city it is a good thing. For us, we’re kind of on the main drag here, so people see us coming in and out. They know we’re here. Beer sales go up. There’s a lot of grilling. The first few years they brought their own stuff, but they also went exploring and now they know we’re here. Now, we get a lot of those people in here as customers.”

He couldn’t pin an exact number of how much his sales increase, but said it is almost double what they usually do. Especially for October. Grilling season usually ends in September in the city, he said, leaving October and on as a slower time until it starts again. Super DIRT Week helped bring a boost when they normally wouldn’t anticipate one.

He’ll usually increase his inventory for the week – especially on beer – but said even if he were to run out, other vendors are happy to help as businesses work together that week knowing they’re all aiming for the same goal.

“We’ve got places we can get stuff if need be,” Garafolo said. “Some of the local vendors are doing the same thing and they’ll work with us throughout the weekend. We can call them up and get things. We’re pretty tight nit with that. Everybody helps everyone at this time because we all need the money.”

Amy Lear, owner of Man in the Moon Candies, located on West 1st Street in the heart of the city, echoed Garafolo’s sentiment about the boost in business.

“I think anything that goes on in town is beneficial to all businesses,” she said. “People always explore what is going on. I’d imagine we’ll do additional business.”

She plans on making special chocolate race cars just for the week.

Race fans will be spread throughout the city for the week, with many camping on-site and others staying in hotels. However, with two months still to go until the event, both options are almost full in the area.

Mark Dorsey, the interim general manager of the Home2 Suites – located directly in front of the speedway – said he has all 89 rooms about booked for the week.

“Everyone is excited to get back to the races and get back to normalcy,” he said. “We’ve been getting calls left and right about people wanting to get in here for Super DIRT Week. Fifty percent of my rooms look at the track, so it’s like being by the Pacific Ocean.”

To help accommodate those still looking to camp near the area, Super DIRT Week has added a new camping site at Fulton Speedway for Friday, Oct. 8, to Monday morning on Oct. 11, further extending the event’s financial impact on the county. For more information on the site, call 844-DIRT-TIX.

Since NAPA Super DIRT Week came to Oswego in 2016, Bob Hoefer, owner of Lighthouse Lanes bowling alley – located in front of the speedway – said there’s been an adjustment period for fans. They were used to being self-sufficient at the Syracuse Fairgrounds but then had to learn a new area when it switched to Oswego. As they’ve learned what amenities are around, business in the city picked up each year.

He cited the event brings a positive “significant impact” to the bowling alley, especially during the main events on the weekend.

“Harbor Fest is free. A lot of people go because it is free and they don’t spend a ton of money,” Garafolo said. “The people for the races, they have no problem spending money. They’re here to spend money. They buy their food, buy their drinks and have a good time. It just helps us all tremendously. It gets your name out there and hopefully, people will come back when there’s not racing going on.”

DIRTcar Day – on Wednesday, Oct. 6 – will see a parade of NAPA Super DIRT Week cars make their way around the city, shutting down streets for the celebration. And while it may be an inconvenience for some, Turner said there are never any complaints.

“We think that is because people understand the economic value of having an event that size in their community,” he said.