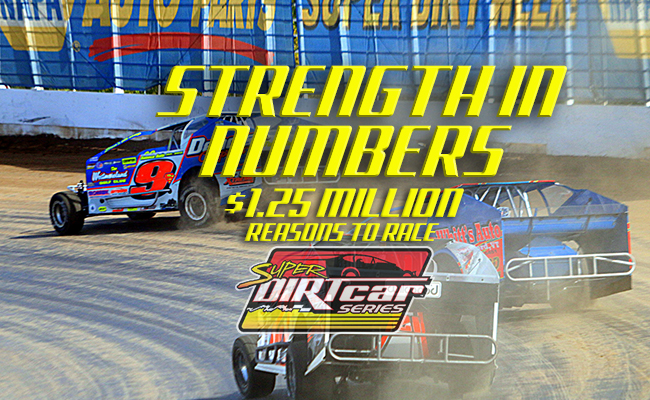 CONCORD, NC — March 21, 2019 — 2019 is officially the year of the Big-Block Modified. The Super DIRTcar Series and its tracks are proud to present a massive $1.25 million in prize money for Series competitors throughout the year.

The crown jewel of the Super DIRTcar Series is, of course, NAPA Super DIRT Week at Oswego Speedway. The 48th action-packed autumn classic runs Wednesday to Sunday, October 8-13 2019. Sunday’s Billy Whittaker Cars 200 caps off the greatest week in DIRTcar racing with the $50,000-to-win finale. The total purse for the week, including the Friday Night Lights Triple Qualifiers, is $205,000.

There are eight NAPA Super DIRT Week Qualifiers peppered throughout the 2019 schedule, and all of them pay at least $10,000-to-win. The Series returns to Can-Am Speedway on Saturday, April 13 to kick-off the points-paying season with the Thunder in the Thousand Islands 100 $10,000-to-win lid lifter.

On Tuesday, June 25, Brett Hearn’s The Big Show XI returns to Albany-Saratoga Speedway. The 100-lap Feature pays out $11,111 to the winner along with a guaranteed start in the Billy Whittaker Cars 200. Less than a week later, the newly dubbed Plattsburgh Airborne Speedway, hosts the Series for another $10,000-to-win NAPA Super DIRT Week Qualifier on Monday, July 1.

July is the month of the money as it includes four $10,000-to-win 100-lap Features. After Plattsburgh, the Orange County Fair Speedway hosts the Battle on the Midway 100 on Thursday, July 18. Then Weedsport Speedway’s Hall of Fame 100 brings the Series to the historic track on Sunday, July 28. Finally, July’s four-crown finale is a 100-lapper on the prestigious Eldora Speedway high banks in support of the Gander Mountain NASCAR Truck Series rounds out the month.

Lebanon Valley Speedway’s annual Mr. DIRT Track USA pays $17,500 to the winner on Saturday, August 31. The final NAPA Super DIRT Week Qualifier falls takes place Saturday, September 14 at Mohawk International Raceway with the Mohawk 100. All other Super DIRTcar Series races pay out a minimum of $7,500 to the winner and at least $500 to start the race.

For the latest Super DIRTcar Series news, make sure to follow on Facebook, Twitter and at SuperDIRTcarSeries.com. And if you can’t make it to the race track, tune in with our partners at FloRacing.