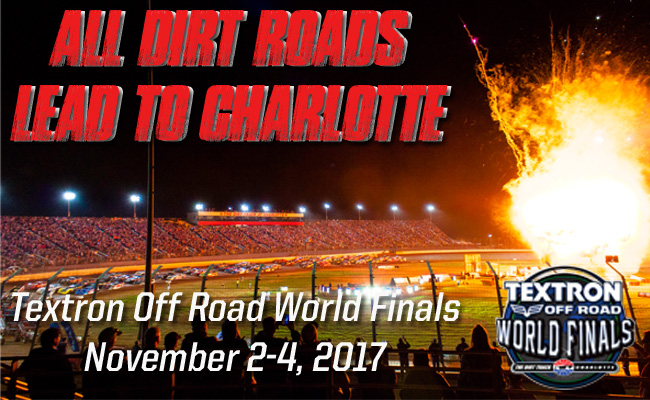 All Dirt Roads Lead to Charlotte

CONCORD, NC — Oct. 17, 2017 — The 2017 racing season is made up of 252 days between February and November. During this time, every mile traveled, every lap around a racetrack, every dirt road leads to The Dirt Track at Charlotte Motor Speedway for the Textron Off Road World Finals on November 2-4.

This year, Textron Off Road brings its legacy of power, performance and precision engineering to the event as its title sponsor. Textron Off Road “Runs Clean, Gets Dirty” – just like our champions.

One of the biggest storylines heading into the season finale is the title points battle in the Super DIRTcar Series, where only 30 points separate Matt Sheppard and Billy Decker. A 30-point gap could be as little as a couple positions on the the track. With three nights of competition at The Dirt Track at Charlotte Motor Speedway, the battle between the pair is sure to be fierce.

It’s looking like a ninth championship win for Donny Schatz, but fellow Outlaw David Gravel, of Watertown, CT, is determined to continue his storybook year and add to his career-high of 17 wins, shattering his previous best of just nine victories. David Gravel and his crew chief Barry Jackson recently announced their return to the No. 5 CJB Motorsports team in hopes of launching an all-out assault on the 2018 Series championship.

World of Outlaws Craftsman Late Model Series leader Brandon Sheppard, from New Berlin, IL, is looking to set a new record for most wins in a season and outdo his Rocket House car predecessor Josh Richards. Sheppard, who currently has 17 wins on the 2017 season, will tie Richards with one more victory. A weekend sweep at the Textron Off Road World Finals will re-write the record books in Sheppard’s favor.

As the 2017 racing season comes to a close at the Textron Off Road World Finals, more storylines are unfolding among the three series. Keep an eye on our websites to read more about the buildup to the final checker flag of the season and the crowning of a champion.