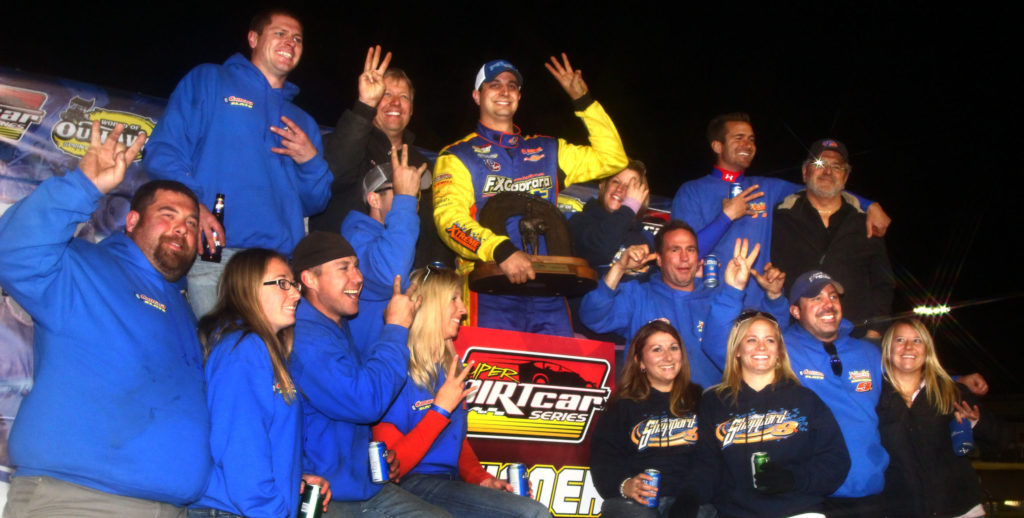 Sheppard and the team traveled with the series to The Dirt Track at Charlotte still in a heated points race going into PEAK Motor Oil World of Outlaws World Finals presented by NAPA Auto Parts. Jimmy Phelps and Brett Hearn were both within reach of the points lead, with two 40-lap, 150-point races left to determine the 2012 champion.

In the first feature race of the weekend Friday, Nov. 2, Sheppard finished 12th and Hearn took 3rd, putting “the Jet” within 60 points of the lead and further intensifying the championship battle going into Saturday’s finale. Britten took the initial lead in Saturday’s 40-lapper, but Hearn was right behind him, and a win for Hearn would mean that Sheppard a 14th or better finish to clinch the title. As a result, Sheppard found himself taking fewer risks.

“When you’re down here just trying to win the race, you take more chances and you try to run a little harder,” Sheppard said. “I wanted to win the race, I wanted to run up front, but on the other hand, you’ve got to finish the thing. That’s the most important thing.

“When you’re in a points battle and you’re chasing, you run as hard as you possibly can,” Sheppard continued. “When you’re leading, you run hard, but you have to be a little conservative too, so it changes the whole aspect.”

Nonetheless, in lap 31, it looked like Sheppard might have a chance to steer his JB Motorsports 9s FX Caprara Car Co./Xtreme Lubricants/Bicknell entry to its first-ever win at Charlotte, as he raced three-wide through the turns beside Britten and Hearn. Hearn raced ahead along the front straightaway and kept the lead, leaving Britten to finish second and Sheppard fourth after he was passed late in the race by Jimmy Phelps.

“I actually thought we were going to sneak up there and win that thing,” said Sheppard. “It seems the whole season long it takes us 60, 70, 80 laps to get up front. We’re more of a long run, long race type of race team. We got in that one long run there and I started running those guys down, and then got up to them. And then we got that caution at the end and it kind of hurt me a little bit. I wasn’t going to force the issue too much”

Sheppard said consistency, in addition to speed, is key to winning the series championship. Consistency helped him with the track championship at Canandaigua Motorsports Park, adding 1000 bonus points to his total, and consistently strong finishes in series races helped earn him 1,439 series points.

Of Sheppard’s 13 starts in the series, the only timee he was unable to break the top ten was Friday’s feature during PEAK World Finals presented by NAPA. “Super” Matt earned eight top-five finishes in the series this season and three total wins, two at Rolling Wheels Raceway Park in Elbridge, N. Y., and one at Autodrome Drummond in Drummondville, Quebec.

“Not many people have been able to put together that good of a consistent season three years in a row,” Sheppard said. “That’s what it takes. You’ve got to be consistent, but you also have to be fast. You can’t just have one or the other. You’ve got to have them both.”

In addition to his wins, one of the biggest highlights of the 2012 season for Sheppard was a second-place finish – for the VP Small Engine Fuels 200 during NAPA Auto Parts Super DIRT Week XLI at the New York State Fairgrounds in Syracuse.

Going forward, Sheppard hopes to see a win at The Dirt Track at Charlotte. He may have celebrated three championship titles at the premier venue in North Carolina, but he has yet to reach victory in one of the series races there.

“I sure would like to win one of these things down here,” Sheppard said. “I’ve been second a bunch of times, I’ve been up front, but I haven’t won one yet.”

After three great seasons in a row in the Super DIRTcar Series, Sheppard and his team are looking forward to another great one in 2013, starting with UNOH DIRTcar Nationals presented by Summit Racing Equipment Tuesday, Feb. 12, through Saturday, Feb. 23, at Volusia Speedway Park in De Leon Springs, Fla.