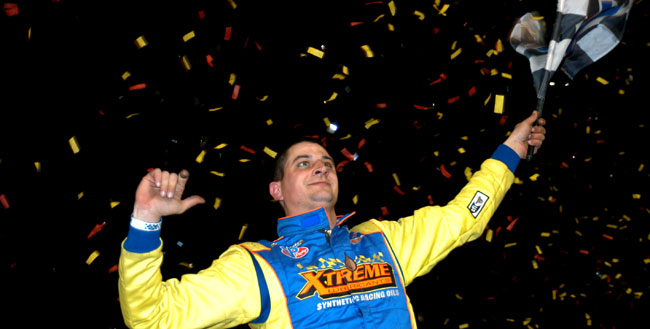 BARBERVILLE, FL – Feb. 1, 2011 – Two feature wins during last year’s DIRTcar Nationals by UNOH proved to be a harbinger of great things to come in 2010 for Matt Sheppard.

The 28-year-old DIRTcar Big-Block Modified sensation from Waterloo, N.Y., is hoping to follow the same template in 2011 when he once again heads south to kick off his campaign with four consecutive nights of non-point Super DIRTcar Series action (Feb. 16-19) as part of the 40th annual mid-winter racing extravaganza at Volusia Speedway Park.

“I feel great about how we started out last year at Volusia and then carried that momentum into the season back at home,” said Sheppard, who posted a circuit-leading total of 19 DIRTcar-sanctioned feature wins in 2010 en route to capturing his first career overall Hoosier Tire-VP Racing Fuels Mr. DIRTcar Big-Block Modified championship. “We’ll try to do the same thing this year. It’s a new season and anything can happen, but we’re just gonna keep doing what we’ve been doing and see if we can keep it going.”

Last year’s Big-Block Modified competition at Volusia saw Sheppard win twice in three starts (one race was rained out), highlighted by his triumph in the extra-distance series closer. He finished sixth in the DIRTcar Nationals by UNOH opener and then scored back-to-back triumphs, propelling him to the event points title for the first time.

Sheppard registered his first-ever victories at Volusia last year, breaking through after coming close to a checkered flag several times in 2009. He set the stage for his ’10 success the previous year with finishes of second, third and fourth as well as a heartbreaking near-win in the week’s Big-Block opener.

“We were really good down there at Volusia (in 2009),” said Sheppard, who has started 18 DIRTcar Nationals by UNOH features during his eight-year Big-Block Modified career. “I think we were fast enough to win every night, but we drew a lot of bad starting positions and some stuff happened when we were actually in good position. I remember that first night I was trying to pass Pat Ward for the lead with a few laps to go, but we bumped together and I got a flat right-rear (relegating him to a 16th-place finish).

“Last year we went back with the exact same deal (as 2009) and things worked out a little bit better for us.”

Sheppard plans to battle in this year’s DIRTcar Nationals by UNOH behind the wheel of the Jeff Brownell Sr.-owned Xtreme Lubricants Bicknell car he debuted in last November’s Lowes Food World Finals at The Dirt Track at Charlotte. It’s virtually a twin to the machine he drove last year at Volusia, a sweeping, D-shaped track that he likens – in a manner of speaking – to his Sunday-night home, Cayuga County Raceway in Weedsport, N.Y.

“Shape-wise, Volusia’s about the same as Weesdsport, but it’s just like four times the size,” quipped Sheppard, who won the 2010 points championship at Cayuga County. “It’s like Weedsport, where you turn into one, you pick up the gas and then you’re on it a long time down the backstretch all the way until you’re down into turn three. The only thing is, at Volusia you’re going a lot faster.

“Volusia is super-fast,” continued the driver known as ‘Super Matt,’ who owns 73 career DIRTcar Big-Block feature wins, including 18 in Super DIRTcar Series events. “It’s more high-speed than most of the tracks we run at up here (in the Northeast), so we have to run a different setup there because of it. It’s a lot of fun to race there because it’s a big, wide track and you can run all over it, but you still gotta have a good car, a good motor and a good setup.”

A fulltime professional DIRTcar Big-Block Modified driver since graduating in 2006 from New York’s Rochester Institute of Technology with a degree in Mechanical Engineering Technology, Sheppard relishes the opportunity to begin his season in the Sunshine State. The 2011 edition of the DIRTcar Nationals by UNOH marks the 27th trip to Florida for Northeastern Modified teams since 1978 and it will be DIRTcar’s 20th visit to Volusia since staging its inaugural event in 1982.

“It’s nice to get away from New York in the winter,” said Sheppard, whose hometown has received more than two feet of snow so far this winter. “It can get cold in Florida at night, but it’s still not snowing like back home. We’re able to go somewhere warmer, relax a little bit and get back on the racetrack to get the new year started.”

Adding more anticipation to his nearly 1,200-mile trek to Volusia, the DIRTcar Nationals by UNOH will mark the first time Sheppard takes to the track wearing the coveted Mr. DIRTcar Big-Block Modified crown. It’s an honor he doesn’t take lightly.

“(Mr. DIRTcar) is really surreal,” Sheppard said last November after accepting his $50,000 championship prize at the DIRTcar Northeast awards banquet. “Just the history behind it. To be listed in the same category as guys like Alan (Johnson) and Danny (Johnson), Jack Johnson, Will Cagle, Brett Hearn and Billy Decker…there’s no way to put that into words. Probably still hasn’t sunk in, probably take a while before it will.”

The 2011 DIRTcar Nationals by UNOH officially kicks off DIRTcar Northeast’s 36th consecutive season of Big-Block Modified competition. It will be the 14th straight year that the Big-Block Modifieds will be in action at Volusia during the week leading up to the Daytona 500 at Daytona International Speedway, which sits less than a half-hour drive from the Volusia oval.

A star-studded field of DIRTcar Big-Block Modified drivers will join Sheppard, including seven-time DCN by UNOH champion Brett Hearn of Sussex, N.J., who owns a record 19 career wins in Florida, and Stewart Friesen of Niagara-on-the-Lake, Ont., the defending champion of the SEF Small Engine Fuels 200 at the Syracuse Mile and the winner of last year’s opening-night event at Volusia.

A four-night Big-Block Modified ticket package is being offered to fans for $125, while single-day tickets are always available on race day. In addition, the event’s unique ‘Free Pit Pass With Every Ticket’ offer allows all fans meeting the minimum age requirement to visit the pit area for an up-close perspective on the competition.

For more information on the DIRTcar Nationals by UNOH, including special pricing on advance-sale tickets, visit www.DIRTcarNationals.com or call 704-795-7223 or 386-985-4402.

Additional info on the Super DIRTcar Series for Big-Block Modifieds is available by logging on to www.superdirtcarseries.com.