SEPTEMBER TO REMEMBER: More than $300,000 in purse on tap in September for Super DIRTcar Series 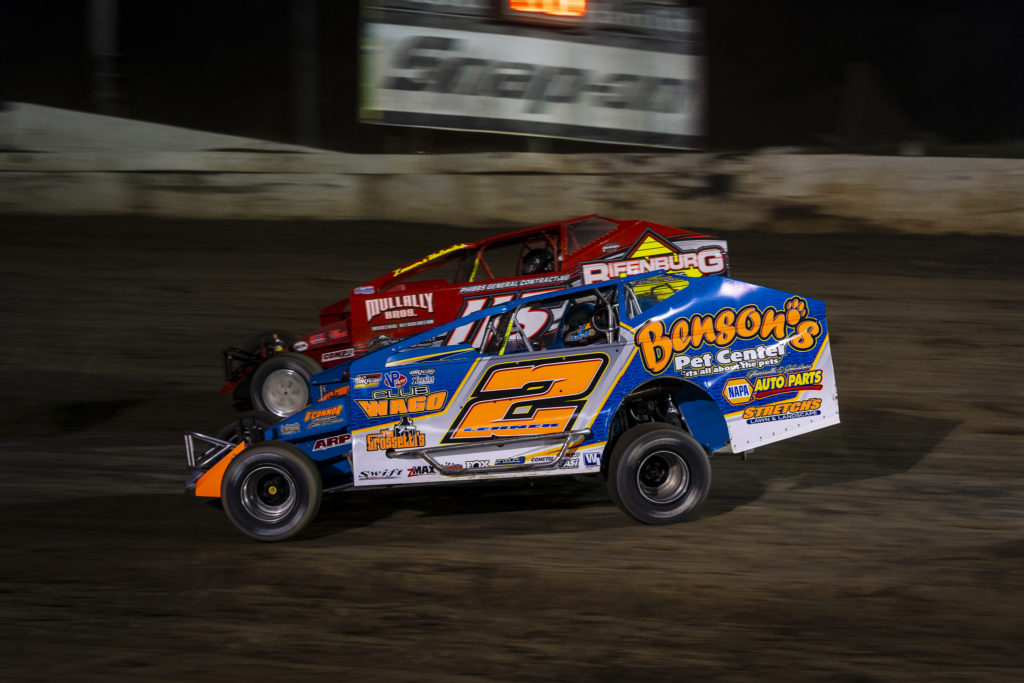 WEEDSPORT, NY –  This September contains six premier Super DIRTcar Series races with four of the five paying $10,000 plus to win for the Beats of the Northeast to clash over. That also means there are only four more prized NAPA Super DIRT Week starting positions up for grabs.

So far only six drivers have locked themselves into the Billy Whittaker Cars 200 during NAPA Super DIRT Week. They include: Stewart Friesen, Demetrios Drellos, Tim Fuller, Matt Sheppard, Max McLaughlin, and Chris Hile.

This Saturday (Sept. 4), Lebanon Valley Speedway takes center stage with the $25,500-to-win Mr. DIRT Track USA. The Valley of Speed is one of the fastest and most challenging tracks on the tour

After that, it’s the two-day Cavalcade Cup Weekend at the historic and pristine Weedsport Speedway on Sept. 10-11. Friday’s Feature pays $7,500 while Saturday pumps the purse to $10,000 for the first Big Block across the line.

Saturday, Sept. 18, brings the Series stars back to Land of Legends Raceway for the third annual Gerald Haers Memorial. This time, the memorial win comes with a guaranteed start at NAPA Super DIRT Week.

The month of money concludes with a NAPA Super DIRT Week qualifier at The Great Race Place, also known as Albany-Saratoga Speedway, for the Massive Malta Weekend, featuring both the Super DIRTcar Series and the DIRTcar Pro Stock Series.

The Valley of Speed – Lebanon Valley Speedway – has been a staple on the Super DIRTcar Series calendar since 1972 when Dick Hansen took the inaugural win. In 2021, things are a little different. This year, Mr. DIRT Track USA will pay $25,500 to the winner after 100 laps of high-speed action.

Lebanon Valley is a unique racetrack with some of the longest straightaways the Series travels. followed by high-banked paperclip turns at each end. Speed, brakes and bravery will crown the Mr. DIRT Track USA winner on Sept. 4. Click here for tickets and camping info.

The Super DIRTcar Series will contest for a $7,500 payday on Saturday and then $10,000 on Sunday, along with an elusive NAPA Super DIRT Week guaranteed starting spot. Both events are full points nights.

Stewart Friesen took the last Series race win at Weedsport back in July at the Hall of Fame 100. But to get the inaugural Cavalcade Cup Weekend win, he’ll have to contend with other former Weedsport winners like Max McLaughlin, Matt Sheppard, and Mat Williamson.

Click here for more info on the Cavalcade Cup.

There’s always something special about Big Blocks at Land of Legends Raceway. The long-standing Canandaigua, NY race track once again hosts the Gerald Haers Memorial on Saturday, Sept. 18. New this year, the event will be a full Series points race. And along with points, drivers will be chasing the $10,000-to-win top prize and a guaranteed start at NAPA Super DIRT Week.

This year, Justin Haers, whose father is the namesake of the memorial, won the Land of Legends Raceway track championship in a tight battle with fellow Series stars Erick Rudolph and Peter Britten. Haers edged the duo by just two points.

Rookie sensation Chris Hile, in the #5H, took the checkered flag at last year’s Gerald Haers Memorial. Hile has also been on a hot streak recently, winning races in Hoosier Racing Tire Weekly Championship racing and finishing well in Series races. This could be a breakthrough race for the Syracuse, NY driver.

Click here for track info on the Gerald Haers Memorial.

Malta, NY’s Albany-Saratoga Speedway has been home to some of the most edge-of-your-seat racing in the Northeast. The Massive Malta Weekend at the track is a two-day race with a 358 Modified special on Friday night followed by the Super DIRTcar Series and DIRTcar Pro Stock Series on Saturday, Sept. 25.

Anthony Perrego took the last Series win at Albany-Saratoga during 2020’s DIRTcar OktoberFAST. He’ll be on the hunt to capture another and a guaranteed start at NAPA Super DIRT Week.

Win Slavin won the first Super DIRTcar Series race at the track in 1977. The Series raced there regularly until 1984. When it made its triumphant return in 2005, Billy Decker claimed the victory.

UP NEXT IN OCTOBER & NOVEMBER

When September ends, all eyes will be on the 49th NAPA Super DIRT Week (Oct. 6-10). The Demon 100 at Brewerton Speedway, on Oct. 5, will kick off the racing action for the week, giving Super DIRTcar Series drivers another chance at $10,000 and their final chance of securing a guaranteed starting spot in the $50,000-to-win Billy Whittaker Cars 200 on Sunday, Oct. 10. CLICK HERE for tickets and more info.

Then, the Super DIRTcar Series will conclude its 2021 season in epic fashion at the NGK NTK World Finals at The Dirt Track at Charlotte (Nov. 4-6), crowning two more Feature winners and the 2021 Series champion.

If you can’t make it to the track, you can watch every Super DIRTcar Series race live on DIRTVision – either online or through the DIRTVision App.