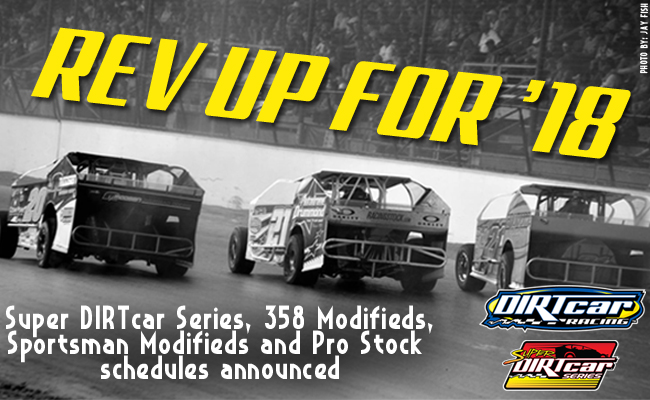 CONCORD, NC — Dec. 1, 2017 — The Super DIRTcar Series is excited to announce its 2018 schedule along with the DIRTcar 358 Modifieds, Sportsman Modifieds and Pro Stocks. A total of 27 tracks will see action in 2018 from February through November across the four DIRTcar Racing divisions.

The premier dirt racing series in the Northeast, the Super DIRTcar Series, will make its annual pilgrimage to DIRTcar Nationals at Volusia Speedway Park to celebrate the Speedway’s 50th year of racing and unofficially kick off the season with a non-points event. The Super DIRTcar Series will benefit from the new expanded event schedule with the Big-Block Modifieds in action for five straight nights from Tuesday to Saturday, Feb. 13-17.

The quest for the Super DIRTcar Series championship will officially begin at Fulton Speedway on April 28 as the Big-Block Modifieds return to action at the High Bank Holdup. The Series heads to New Jersey on Wednesday, May 16 for a date at Bridgeport Speedway. Additional highlights on the Super DIRTcar Series schedule include a second date for Brewerton (NY) Speedway, now June 15 and Sept. 14. Brett Hearn’s BIG Show 9 at Albany-Saratoga Speedway on June 26 is a can’t miss event.

The end of July Weedsport Speedway hosts a monster back-to-back event when the Super DIRTcar Series visits the .337-mile oval for the Hall of Fame 100 on Saturday, July 28. The following night the World of Outlaws Craftsman® Sprint Car Series take center stage. Last year at the Hall of Fame 100, Stewart Friesen narrowly edged out Tim McCreadie at the finish line to take home the trophy, making it one of the most exciting finishes of the season.

Coming off a big weekend at Weedsport, the Series will visit Fonda Speedway on August 1 for the fourth annual Jack Johnson Tribute race.

One change to Series schedule that will benefit race fans will be when Mr. DIRT Track USA switches from a Thursday night to Saturday, Sept. 1 at Lebanon Valley Speedway.

This year will mark the 47th annual NAPA Auto Parts Super DIRT Week. Race fans all agree, last year’s NAPA Super DIRT Week was one of the greatest events in recent history. A last-lap pass for the win brought the near capacity crowd to their feet wanting more.

All Dirt Roads will once again lead to Charlotte for the crowning of the 2018 Super DIRTcar Series champion on Thurs-Sat., Nov. 1-3 with the running of the Textron Off Road World Finals.

In addition to the release of the 2018 schedule, DIRTcar Racing is also announcing a change to the DIRTcar Hometrack program. Hometrack points will no longer be collected for the Big-Block Modifieds starting in 2018. Traditionally, in order to compete for the Super DIRTcar Series championship, drivers needed the bonus points they were able to collect from the DIRTcar Hometrack program. Without these points, teams outside of the Central New York hotbed, challenged by the lack of proximity to these weekly tracks, now have a chance to compete for the championship.

“After working with the teams and track promotors, we are confident this will bring positive change to the sport,” said Super DIRTcar Series Director, Mike Perrotte. “One of the many benefits we see with this change is it will alleviate travel costs on teams from having to travel hundreds of miles to a DIRTcar-sanctioned track to collect Hometrack points.”

Year-long discussions were finalized at the Northeast Promotor Meetings in November when DIRTcar Racing officials and track promoters sat down to discuss the change. At the conclusion of the meeting everyone was in agreeance that the elimination of Hometrack points will benefit fans, drivers, teams, and tracks all over the northeast.

Big-Block Modified teams will have the opportunity to try their hand at new tracks and challenge themselves with less familiar territory, while weekly racers can maintain their hometrack advantage against new invaders.

“The goal will be to create new stars in Modified racing and bolster the car counts not only on the Super DIRTcar Series but at weekly track,” added Perrotte.

“A change to the [DIRTcar] Hometrack program will open up the door to new faces giving them the opportunity compete at their weekly tracks,” added Jimmy Phelps. “This change will also allow for a few more weekend shows at weekly tracks that traditionally ran on a week night, you will also see new faces popping into various weekly events.”

The 358 Modified schedule is split into two regions, North and South. The 2018 season kicks off with a Mother’s Day special on Sunday, May 13 at Utica-Rome Speedway. The 358 Modifieds will visit Mohawk International Raceway (Aug. 9), Fonda Speedway (Sept. 21), and a host of other great tracks before the combo events begin.From Oct. 2 to 13, the 358 Modifieds will run five events at five separate tracks beginning with Utica-Rome Speedway and moving onto Weedsport Speedway, Brewerton Speedway and Oswego Speedway before closing out the season with the Loud & Dirty Northeast Fall Nationals at Brockville Speedway.

For the second year in a row, the Sportsman Modifieds will once again have a regionalized schedule with Central, North and West regions. Each region will have six races spanning from late April to September. Points from every race will tally towards the Fall Championshipat Brockville Ontario Speedway on Friday, Oct. 12 before drivers head south to Charlotte for a non-points event in the popular OneDirt World Short Track Championship.

“Super DIRT Week and The OneDirt World Short Track Championship in Charlotte are obviously two of the best events in short track racing nationally, and the Sportsman Modifieds are a big part of each,” said DIRTcar Racing Northeast Sportsman Director Cory Reed. “The Outlaw 200 at Fulton drew an astounding 111 entries this year, proving it’s high on the list of big ones for our competitors.”

The Pro Stocks will have a 14-race skid for the 2018 season. The season will begin on Sunday, April 29 at Utica-Rome Speedway and grind throughout the summer before coming to a close in late October. A new exciting addition to the Pro Stock schedule: they will join the Sportsman Modifieds at the OneDirt World Short Track Championship at The Dirt Track at Charlotte Motor Speedway to close out their season with a non-points event from Oct. 25-27.