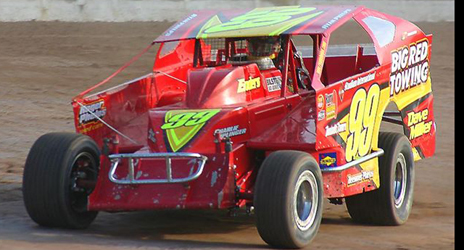 Any where you look in the record book, the name Phelps spells success on the DIRTcar Racing circuit in Central New York.

Start out with Roger Phelps in the late 1970s and continue into the 80s when a transition from full-fender to open-wheel racing took place. Then follow along with current star Jimmy Phelps beginning in the 90s and find upstart Chad Phelps reaching victory lane for the first time in the new millennium.

But bloodlines don’t stop there. As DIRTcar Racing opens up for it’s 33rd straight season of operation in 2008, a driver quickly gaining familiarity among the Big-Block Modified fraternity is top newcomer to the Advance Auto Parts Super DIRTcar Series, Ryan Phelps.

“We had a lot of success and were very competitive at the end of last season so this year we want to step up the program and maybe make a name for ourselves,” said Ryan Phelps, 23, as he prepared the Big Red Towing-Dave Miller Auto Body/Bicknell entry in the back of his father Roger’s used car dealership in Fulton, New York. The second-generation chauffeur will continue to carry the family trademark number 99 —derived from former Empire State star and Cup winner Geoff Bodine— first debuted by Roger in the Late Model ranks when DIRTcar was formed in 1976.

“Getting our feet wet last year was good as now we can follow it up with a full year under our belts. Our ultimate goal is to win a series race but that’s not really any kind of expectation at this point. Maybe get some top-fives and be around the top-10 in points would be nice but again being competitive is what we’re after when you run against this caliber of driver,” noted Phelps, currently employed as an 11th grade history teacher at Newark (NY) High School where he also serves as the head coach of the wrestling team.

Phelps trades in his desk job for a seat behind the wheel when he kicks off his sixth season of Modified racing in the 2008 Advance Auto Parts Super DIRTcar Series opener at Hagerstown Speedway on Saturday, March 22. A star-studded field of Big-Block Modifieds is expected to converge on the storied Maryland half-miler, with a top prize of $6,000 awaiting the winner of the 7th Annual North-South Shootout 100.

“You grow up at the track wanting to compete at the top level with the best teams and the Advance Series it where its at today. I’ve been going to the races since I was three and started running quarter midgets the next year so I’ve really grown up with the tour. The DIRTcar Series is the place to be, it’s the premier series for our top class. And working in a school district is a perfect fit for me with the summers off. The series is something I can plan to be a part of for a long time if I’m successful at it.”

“We’re not as familiar with Hagerstown as some of the others, but if I haven’t been there to race at least I’ve gone to most of the (Series) tracks to watch. We’ve run Hagerstown twice before, once there were almost 70 cars and we didn’t qualify and the other time (finished 20th) was about two years ago and we didn’t run well.”

“When we won at Can-Am last year in August that was a turning point and we seemed to have a good set-up just about everywhere after that. We also nailed down a whole bunch of top 5’s at our local tracks like Brewerton, Fulton and Thunder Alley. Setting fast time at Cayuga County over Labor Day helped us to keep building the momentum and the three top 10’s in the triple 20’s and the race we almost won at Rolling Wheels against Gary (Tomkins) were huge highlights from last season. Scoring a close second-place finish at Rolling Wheels gives me confidence going into this year that we can show up at a series race and compete for a win. I never truly believed that we could win a series race until that night,” Phelps added.

Phelps will be joined on tour by his older cousin Jimmy Phelps, winner of last Saturday’s Big-Block feature at Hagerstown, and a threat to challenge for the overall Hoosier Tire-Sunoco Race Fuels Mr. DIRTcar crown during the upcoming race season.

“We were never really that close up until a couple years ago, now he’s the number one guy I’ll talk to at the tracks,” said Ryan, who finished 13th in the final Mr. DIRTcar Big-Block point standings last year while Jimmy placed a career-best fourth. “A big reason is we both run a similar shock package and when cars are so close nowadays handling is everything. Hopefully, we can match a little of Jimmy’ success this year, he’s been gaining ground lately and can win any time out with the team he’s got going.”

Hagerstown pits gates are scheduled to unlock at 3:00 p.m., grandstands open at 4:00 p.m. with warm-ups starting at 5:30 p.m. followed by Integra Shocks Big-Block Time Trials. The speedway is located on U.S. Route 40, four miles west of I-81. For additional information, log into www.superdirtcarseries.com, contact the speedway office at 301/582-0640 or visit the track website at www.hagerstownspeedway.com.