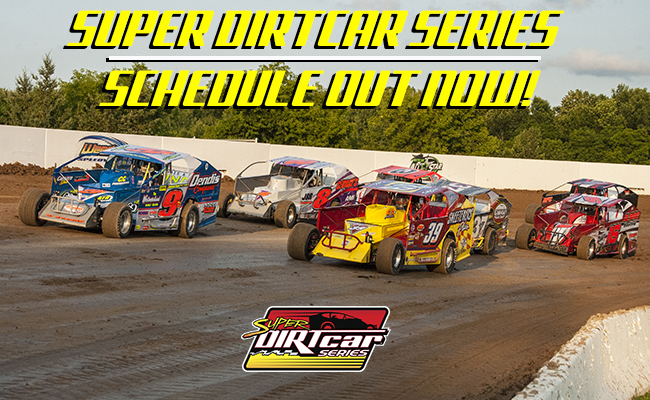 CONCORD, NC – December 4, 2018 – The Super DIRTcar Series is set to run 33 nights in 2019 with a dynamic schedule that includes returning to world-famous Eldora Speedway for a $10,000 to-win NAPA Auto Parts Super DIRT Week Qualifier in conjunction with the NASCAR Gander Mountain Truck Series race. Also making a grand return to the schedule is the historic Can-Am Speedway, which is also hosting a $10,000 to-win NAPA Super DIRT Week Qualifier in a north country icebreaker. In all, the premier Big-Block Modified series of the northeast will compete from Florida to Quebec.

New Super DIRTcar Series and DIRTcar Northeast Director Dean Reynolds expressed his excitement for the 2019 tour: “We all worked very hard to put together a Super DIRTcar Series schedule that is exciting for fans and also a little more travel friendly for the teams. We are very excited about the response from the purse increase and we also have eight shows that are $10,000 to-win or more. Thank you to all the tracks for their support.”

A total of eight race tracks will award $10,000 or more to win along with a guaranteed starter status for the 200-lap finale at NAPA Super DIRT Week, half of which are brand new for 2019. New Qualifiers for 2019 include July 1 at the renamed Plattsburgh Airborne Speedway headed up by first-year promotor Robby Knowles, Mohawk International Raceway on September 14, Eldora Speedway on July 31, and Can-Am Speedway on April 13 to open the points-paying race schedule.

Brett “The Jet” Hearn won the inaugural visit to Eldora Speedway in 2002 and Billy Decker took the last point race in 2017. Billy Whittaker grabbed an exhibition race win in 2017, as well, in front of the capacity crowd. Tim Fuller has two wins, 10 years apart, in 2006 and 2016. 2019’s high-banked half-mile Big-Block Modified challenge will award the winner with a guaranteed start at NAPA Super DIRT Week along with a $10,000 payday.

The Big Show XI at Albany-Saratoga Speedway brings the noise to the Capital District on June 25. The winner will take home $10,000 and a guaranteed starting position for the 200-lap NAPA Super DIRT Week Big-Block Modified Feature on Sunday, October 13 at Oswego Speedway.

July is the month of money with $62,000 going to the winners alone. In addition to the $10,000 to-win races at Plattsburgh Airborne Speedway and Eldora Speedway, the Orange County Fair Speedway (July 18) and Weedsport Speedway (July 28) will also put up the big money for their NAPA Super DIRT Week Qualifiers.

Lebanon Valley Speedway’s crown jewel event and NAPA Super DIRT Week Qualifier, Mr. Dirt Track USA, returns to the schedule with its traditional $17,500 to-win grand prize on August 31.
The schedule concludes with three massive events. NAPA Auto Parts Super DIRT Week is scheduled at Oswego Speedway for October 9-13. The following weekend, the Series crosses over the northern border to headline the Northeast Fall Nationals at Brockville Speedway. Finally, the Series Champion will be crowned at the World of Outlaws World Finals at the Dirt Track at Charlotte.

Get your tickets now for the DIRTcar Nationals at DIRTcarNationals.com. Twelve nights of racing concludes with the Big-Block Modifieds taking center stage for five nights February 12-18.

If you can’t make it to one of our great racing events in 2019, be sure to sign up with our partners at FloRacing.com to catch all the Big-Block Modified action live in HD.