Ready to Start at Rolling Wheels 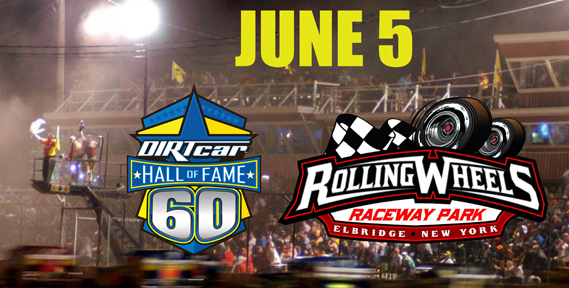 Rolling Wheels Ready for Another Year of Champions

ELBRIDGE, N. Y. – Another year of champions is set to begin at Rolling Wheels Raceway Park with “The Fast Track’s” opener just around the corner.

It all starts Wednesday, June 5, with the Hall of Fame 60 featuring the Super DIRTcar SeriesBig-Block Modifieds, the DIRTcar Sportsman Modified Series and the Midstate Vintage Stock Car Club. After a night honoring motorsports’ finest at the Dirt Motorsports Hall of Fame and Classic Car Museum annual induction ceremony Tuesday, June 4, the best in the sport gear up to spend Wednesday at the Wheels for a celebratory night of racing.

Champions of now and then will be on hand Wednesday, with the prior night’s Hall of Fame inductees holding an autograph session at 5:15 p.m. and heat winners at 8:30 p.m. Additionally, fans who strike early can meet any of the drivers and crew members in the pits, with advance-sale tickets including a FREE Fan Pit Pass.

Last year’s Hall of Fame event winner, Matt Sheppard, who followed up his 2012 All Star Weekend win in May with another Rolling Wheels win in September’s Stars & Stripes 100 Labor Day Classic, is prepping his 9s for what he hopes to be another victory-filled year on the 5/8-mile oval.

“We had a great setup,” Sheppard, the three-time consecutive Super DIRTcar Series Champion, reflected. “When you have success like we’ve had at Rolling Wheels, you don’t really want to mess with it too much.”

The best of the premier traveling tours return to Rolling Wheels for another year in 2013. TheLucas Oil Empire Super Sprint Car Series, with the help of a phenomenal fireworks display, lights up the track for a Independence Day celebratory race Wednesday, July 3. The summer heats up with “The Greatest Show on Dirt,” the World of Outlaws STP Sprint Car Series, making its first of two appearances at the Wheels Tuesday, July 23.

Tickets for all events are already on sale at www.dirtcar.com/tickets, and, as with the Hall of Fame 60, early ticket purchasers for all races receive a FREE Fan Pit Pass. Prepare to see the best of the best, not just on the track, but in person, for what is shaping up to be yet another year of champions at the Wheels.