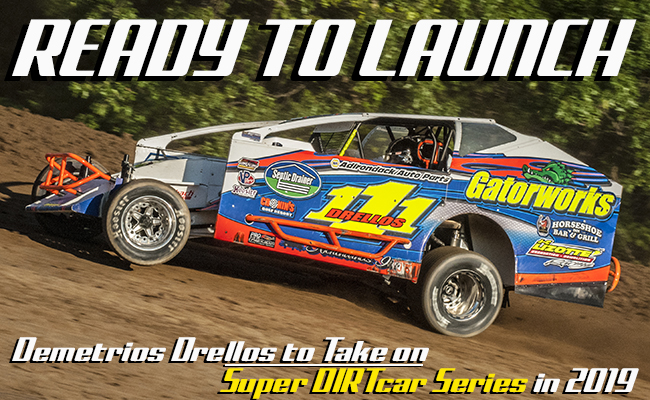 CONCORD, NC – December 20, 2018 – From Soap Box Derby cars to Big-Block Modifieds, Demetrios Drellos has quickly made a name for himself racing DIRTcar Modifieds in Eastern New York. Now he, and car owners Dawn and George Drellos, are preparing to take their Bicknell Racing Products chassis out on the Super DIRTcar Series tour. The 22 year-old Queensbury, NY native knows that if you wants to make it in Big-Block Modified racing, you have to follow the Super DIRTcar Series, and race against the best in the business. But a driver doesn’t wake up one day and decide to do this. Drellos has had a fascinating path to Big-Block Modified racing.

Outside of his seat time in Soap Box Derby cars, Drellos has eight years of competitive dirt racing experience going into the 2019 season. He started out racing Slingshots by Tobias, in Pennsylvania and southern New York. Quite a few notable drivers have advanced out of the Slingshots, including Ryan Smith, Anthony Perrego, Tyler Dippel, Larry Wight, and Ryan Phelps.

“We came in with little to no racing experience. It really is a tough little division. The guys that run them and race those tracks all the time, like Shellhammer’s Speedway and Linda’s Speedway, those tracks are really competitive. It’s not a division you hear a lot about but it is a tough class get the hang of, and it produces a lot of good racers.”

In 2015, Drellos took a huge step from Slingshots into DIRTcar 358 Modifieds. Not only was the jump in race division huge, but taking on the monstrous Lebanon Valley Speedway as a rookie is impressive. Furthermore, the Billy-the-Kid-powered No. 111 held off a charging Kenny Tremont to win in just his fourth start at the legendary speedway. Also, in his rookie year, Drellos took on the famous Moody Mile at the New York State Fairgrounds in the final 358 Modified event there. He finished an impressive 15th.

Drellos explains the jump: “We skipped the Sportsman Modified and went straight to 358s. We went to Lebanon Valley Speedway because we have some friends down there. It’s an hour away from me, but my team is down there and they had experience at the track. It helped that at that track, once you get racing everyone spreads out, so I could focus on just racing the car instead of being door-to-door with someone else every lap.”

Drellos noted, “It has been an advantage running at Albany-Saratoga Speedway against those top guys. It’s helped us a lot. You’re never going to go there and not be against the best guys in the business. It’s a tough track to get the hang of. Last year we took the Big-Block to the big shows and ran the 358 Modified every week. Our season didn’t go as well as it could have. We did get some top 10s there, but things never really clicked with what we were trying to do. We did get a win there in 2017 in the Big-Block.”

Demetrios Drellos and his Queensbury racing operation finished off 2018 in dynamic fashion. At NAPA Auto Parts Super DIRT Week XLVII, an unfortunate mechanical failure ended his Billy Whittaker Cars 200 early and he was scored 39th. But that was not without making some serious noise. “We did well in the Triple 30. We passed Mike Mahaney and some of those guys, which was surprising because we did not plan on doing so well in the Big-Block. We were running really good in the Big-Block throughout the day. We pitted and were on a really good strategy and could go the rest of the way after that one stop. After that, the cracked tube broke inside and just ruined our day,” Drellos said.

Drellos’ final two races of the season took place at The Dirt Track at Charlotte for the World of Outlaws World Finals presented by Can-Am. Unfortunately, the mechanical gremlins followed the team to North Carolina, at least for their first qualifying attempt.

“This was my second time at World Finals. You know how that track is on qualifying day. It’s just really hammer down with the big cushion. Starting position is everything at the track. It’s a really racy track but you can’t start 20th and win there. We had carb trouble the first day and we couldn’t get through the Heat Race. Then in the Last Chance Showdown, we finished two spots out but made it in on a provisional,” he added. Drellos then made a statement Heat Race win qualifying for the second Feature, besting none other than seven-time Super DIRTcar Series Champion, Matt Sheppard.

In Feature number one, the No. 111 drove all the way up from the back of the pack to 13th position. Unfortunately, a melee broke out in front of him and he was collected, costing the team a front clip. Luckily, they were able to work fast enough to get the car ready for the second Feature. “We rebuilt the whole front end and got ready for the second Feature. We won our Heat Race and beat Matt Sheppard. We redrew second. Of course, Matt Sheppard drew the pole. I got passed early by Billy Decker and Tim Fuller. Those guys are so experienced and really talented. We weren’t bad though and got fifth in the race. That’s a very difficult track. It’s not like anything we race up here. There is a lot of circular momentum racing. It’s like Mohawk Int’l Speedway so I think that’s why Tim Fuller runs so well there.”

This was Drellos’ second time at The Dirt Track at Charlotte and he can’t wait to go back. “Charlotte is fun to go to. It’s a great atmosphere. It’s cool how they treat the drivers. You get to go up on stage in front of the crowd. I got to be in the front row of the four-wide with all three divisions.”

In 2019, Demetrios Drellos is taking on the full Super DIRTcar Series Championship in a bid for Rookie of the Year. But he can’t do it alone. Drellos has a supportive family and crew. “Week nights in the shop it’s me and my dad, George. We do 90% of the work. My mom, Dawn, is a really supportive person and co-owns the car with my dad. My crew chief for the Super DIRTcar Series is Michael Horton. Joe and Jo Anne Huguley, who does my social media, are my biggest supporters. My girlfriend, Alexis, is always there for me, as well as crewmembers, Lara and Tom.”

It doesn’t matter how big your team is, as long as you have heart and passion for dirt racing. And that is not something Demetrios Drellos and his team run short on.