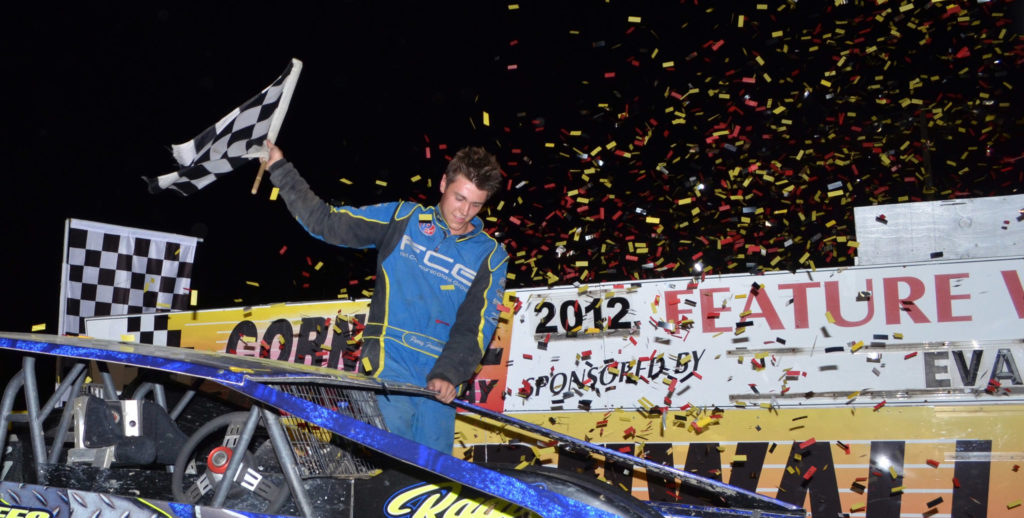 Raabe a Strong Up-and-Comer this Season

WEEDSPORT, N. Y. – July 12, 2012 – When Chris Raabe maneuvered his 01 small block around the quarter-mile oval at Cornwall Motor Speedway to his first career Super DIRTcar Series victory Sunday, July 1, he marked himself a worthy contender even against more powerful Big-Block Modifieds. Raabe, who has triumphed against Big Blocks before, although never before in a series race, proved that up-and-coming drivers don’t have to start big to win big.

The 21-year-old resident of Napanee, Ontario, said the small blocks he drives have their niche, and, given the right conditions, can rival the Big Blocks for top spots. For instance, the comparatively short track at Cornwall, where the lack of long straight-aways diminishes the effect the engine power differential has on the race, creates opportunity for small blocks to lead the pack.

“There’s a time and a place for a small block, and anytime you’re on a long track, the bigger tracks, the Big Block always prevails,” Raabe said. “But sometimes you do come across a small block track, and there they’re just as competitive as the Big Block at times.”

Raabe, who now ranks 17th in points for the Super DIRTcar Series, said he would eventually like to move up to Big-Block Modifieds but for now is chasing success with the two small blocks in his arsenal. This season, he is focusing on local track championships, including at Mohawk International Raceway, where he holds the top ranking for 358-Modified points, and hopes to race in more 358-Modified Series races.

Before his transition to 358-Modifieds in 2011, Raabe successfully ran Sportsmans, earning eight track championships. At the age of 17, he became the youngest Mr. DIRTcar Champion in DIRTcar history, beating out a record set by two-time consecutive Super DIRTcar Series Champion Matt Sheppard. He won the same championship the next year, becoming at 18 the youngest back-to-back Mr. DIRTcar Champion.

“It was all pretty good at the time, and to back it up the following year was really good too. It proved to everyone that it wasn’t a fluke,” Raabe said, adding that he was especially proud to have surpassed a great like Sheppard for the record. “It’s pretty cool, seeing how much success Matt has had over the last few years. He’s pretty legendary now.”

Despite the parallel, and despite the high level of his achievements at such a young age, Raabe is reluctant to compare himself to Sheppard and some of the legendary drivers he was able to top at Sunday’s Super DIRTcar Series race.

“I think for any young kid who’s racing right now the goal is to follow a guy like Brett Hearn, Danny Johnson, Matt Sheppard, guys like that, but whether you can ever live up to those standards is hard to tell. We’ll find out in time I guess,” Raabe said. “Racing’s such an up-and-down sport. You’re on top of the heap one day, and at the bottom the next.”

His success, and that of other up-and-comers, may pave the way for a new generation of talent in Modified dirt track racing. Also entering the Super DIRTcar Series this year is Justin Wright, 25, who, with one start out of the three races this season currently ranks 25th in points for the series. Wright, like Raabe, built a strong career in Sportsmans, just last year finishing third in points for the series and second in track points at Canandaigua Motorsports Park and the Cayuga County Fair Speedway, before moving up to 358-Modifieds. Tommy Flannigan, 24, also hailing from Sportsman and 358-Modified backgrounds, currently ranks 20th in the Super DIRTcar Series.

Although they have not yet entered the Super DIRTcar Series fold, Mat Williamson, 22, and Matt Billings, 19, may soon rise to the challenge, both seeing success in the DIRTcar 358-Modified Series respective point ranks of third and eighth.

Raabe said the biggest hurdle for drivers new to the sport is financial support, but he urges neophytes to remain persistent.

“So far as searching for sponsorship, it’s banging on doors and as presenting yourself well. It’s not all about performance, although performance is a large factor; personality is also a big thing,” Raabe said. “As long as you keep working at it, eventually things will come and go your way.”

For the rest of the summer, Raabe will spend much of his time racing at his home track, Mohawk International Raceway in Akwesasne, N. Y., and preparing for his last year in a mechanical engineering program at Queens University. His team also runs frequently at Can-Am Speedway in Lafargeville, N. Y., and he hopes to travel for Cornwall again for the next DIRTcar 358-Modified Series event Sunday, Sept. 2.