When Matt Sheppard dreamed of being a race car driver, he never dreamed this big.

Now, with his name engraved across the DIRTcar history books, he’s looking to dream as big as he can.

With a full year of racing on the horizon for the Waterloo, NY driver – including his chase of a ninth Super DIRTcar Series title – Sheppard reflected on claiming his eighth champion, spoke candidly about his career and shared what he’s looking forward to most in 2022.

What’s the “off-season” process like?
SHEPPARD: God, it’s not very long. Typically, first thing is to clean everything and whatever cars I’m going to sell, get them sold and out the door. After that, it’s doing maintenance on any of the cars I keep; put a couple cars together; bolt on new body panels. Just getting the cars ready to go. Hopefully by that time the motors are ready to go. Usually, by the time that happens, we’re already on our way back to Florida.

Do you start each year with new equipment or try to reuse equipment?
SHEPPARD: I try to keep them for a certain amount of time. If that time frame is up at the end of the season, I’ll get rid of them. If it’s not, I’ll keep them. I kept three of my cars from last year and got one new one. Usually, I do two and two. They were just on a weird cycle. A couple of my cars were in really good shape. The car I ran at Charlotte (for the NGK NTK World Finals in November) I’m not doing anything to it, except freshening the motor and putting it back in. So, I was very fortunate that way.

Looking at your program versus others, you have a smaller trailer versus a double-decker and aren’t always replacing equipment at the end of each year. Is that your preference or are you still trying to grow?
SHEPPARD: I mean, with the amount of racing going on, I haven’t ruled out a bigger trailer. You know, it’s kind of a deal where I started this team on my own with some of my great sponsors that have been behind me for six-seven years. It’s really just been a building process. We started out with two cars and couple of motors. Every year we’ve been fortunate enough to grow the team more and more and more. We’re getting more equipment and more engines. A little bit more of everything. You know, I’ve got some nice trailers. They’re just not the gigantic ones. Maybe we keep growing and someday down the road, there will be something bigger. For now, it sure is convenient to roll around in a dually and a 44-foot gooseneck (trailer).

How would you assess your 2021 season? Anything you learned?
SHEPPARD: You’re always learning. I feel like we started off pretty slow last year. Kind of had an up and down through the summer. We got hot a couple times. Cold a couple times. But I thought we finished the season very strong. When you finish the season strong (with a runner-up finish in the season-ending race). That always sends things on a positive note going into the next season. We’re looking forward to getting going again.

Is it all about confidence going into 2022 on a positive note?
SHEPPARD: I try don’t to ever get too down on myself. I’ve had ups and downs but it’s car comfort and setup stuff. You think you get going in the right direction and sometimes you are and sometimes you aren’t. We had a lot of good runs at the end of the year so hopefully, we can carry that momentum into this season. Usually, we head down to Florida and that takes the wind out of our sails a little bit. That’s a totally different animal down there. We’ve struggled down there the last few years. We’ve got a few decent finishes, but we haven’t won in a few years. We’ve been putting a lot of time into putting our heads together and trying to figure out what the heck is going to make us better at Volusia (Speedway Park).

SIDE NOTE: Sheppard has three Big Gator championships and eight wins at Volusia during DIRTcar Nationals (which will be Feb. 14-19 to kick off the 2022 Super DIRTcar Series season). 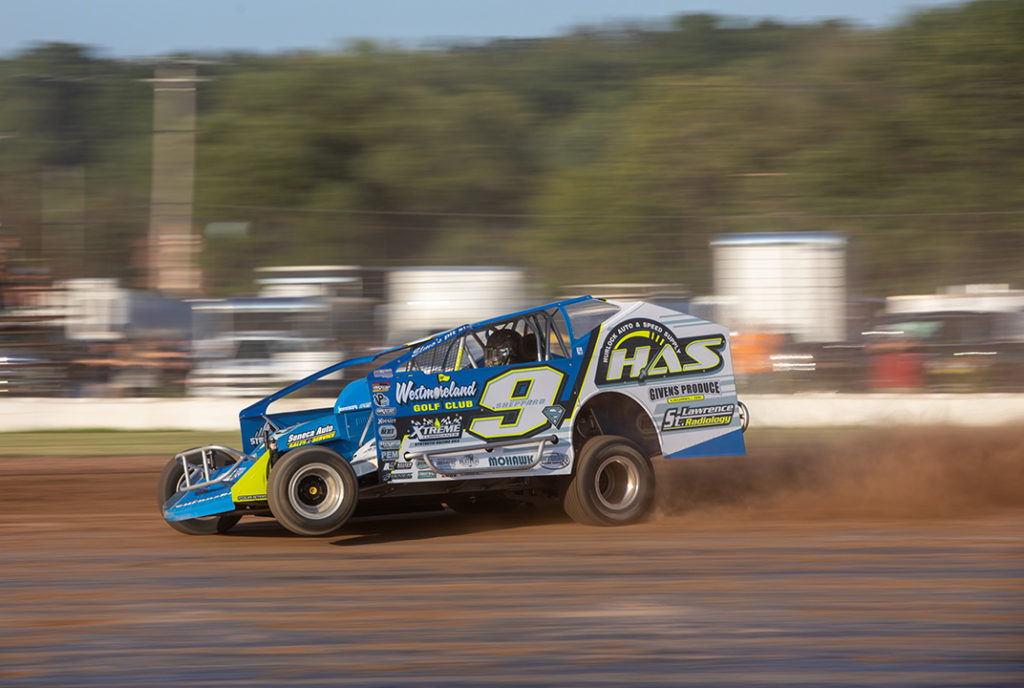 Being the winningest Super DIRTcar Series champion with eight titles now, does that change your mentality at all?
SHEPPARD: No, we approach every season the same way. We want to win as many races and championships as we can. That’s our goal every year.

With the increased overall points fund for the Super DIRTcar Series in 2022 ($60,000 going to the champion) and several big events, what are your thoughts going into the new season and trying to secure a ninth title?
SHEPPARD: That’s what we’re working toward right now is just trying to get geared up. That eighth championship was great, but now we’re looking for number nine. You only get to celebrate it for a short period of time. We’re looking forward to it. We want to win some more Super DIRTcar Series races. We just want to get rolling. We’re getting anxious. We’re getting close. Stuff is starting to come together in the shop. I’m going to go pick up some engines tomorrow. It’s going to be here pretty soon.

Anything you’re looking forward to most in the 2022 season?
SHEPPARD: I think that SummerFAST deal (Aug. 16-18 at Brewerton Speedway, Fulton Speedway and Land of Legends Raceway) is going to be pretty cool. Three nights in a row. Three tracks that are all really close to me. I’m located right in the middle of all of them. I think that will be a cool deal. A little mini speed week. Staying close to home. Three big shows, three nights in a row, I think that’s going to be a neat deal.

This year marks the 50th NAPA Super DIRT Week (Oct. 3-9). With all the success you’ve had at the event, what does it mean to you and what would winning during the 50th year mean?
SHEPPARD: I’d love to get another one at Oswego (Speedway). We had a decent run this past year (with a third-place finish in the Billy Whittaker Cars 200). We’ve had a couple miserable years. I think we won before that (in 2017). It’s been up and down there. Seems like every year the track throws you for a little bit of a loop. I don’t know. I’d love to get rolling this year. A lot of big-money races. Certainly, winning that Super DIRT Week is at the top of the things we’re looking to accomplish.

Whether it’s racing for someone else or yourself, what do you think has kept you so competitive and consistent every year?
SHEPPARD: I think we work really hard at it and have a lot of good people around me. I’ve had some great sponsors that have stuck with me throughout the years, and I’ve had a lot of great crew help. We’ve been together six, seven, eight years or longer. We just know what it takes. When you have a great team around you and keep yourself rolling every year, that’s where we’re at right now. Just trying to maintain the status quo and doing what you’re doing. Hopefully, the wins and championships keep coming.

When you were young and envisioned yourself as a future race car driver, did you ever see yourself being this successful?
SHEPPARD: Absolutely not (said with a laugh). When I was a kid, I was just hoping someday I could drive a dirt Modified. Then I did. Then, you know, I was excited to race with guys like Brett (Hearn) and Danny (Johnson) and Bob (McCreadie). That was a thrill. Then you win your first Big Block race and it’s like, ‘Wow, I won a Big Block race.’ It just kind of snowballs from there. I never really ever dreamed it.

Amongst all the championships and wins you’ve collected in your career, is there something you still have circled you want to accomplish before you hang up your helmet down the road?
SHEPPARD: Oh man, I don’t know. I guess you’re kind of putting me on the spot. I’m not really sure. I guess at this point I want to keep winning as many races as I can and more championships. Maybe try to get my names in more of the history books, so that when I’m done and gone and retired from racing, you know, when people look back at the stats and the history we’re up there at the top of a lot of categories, not just championships.

If you can’t make it to the track, you can watch every Series race live on DIRTVision – either online or with the DIRTVision App. 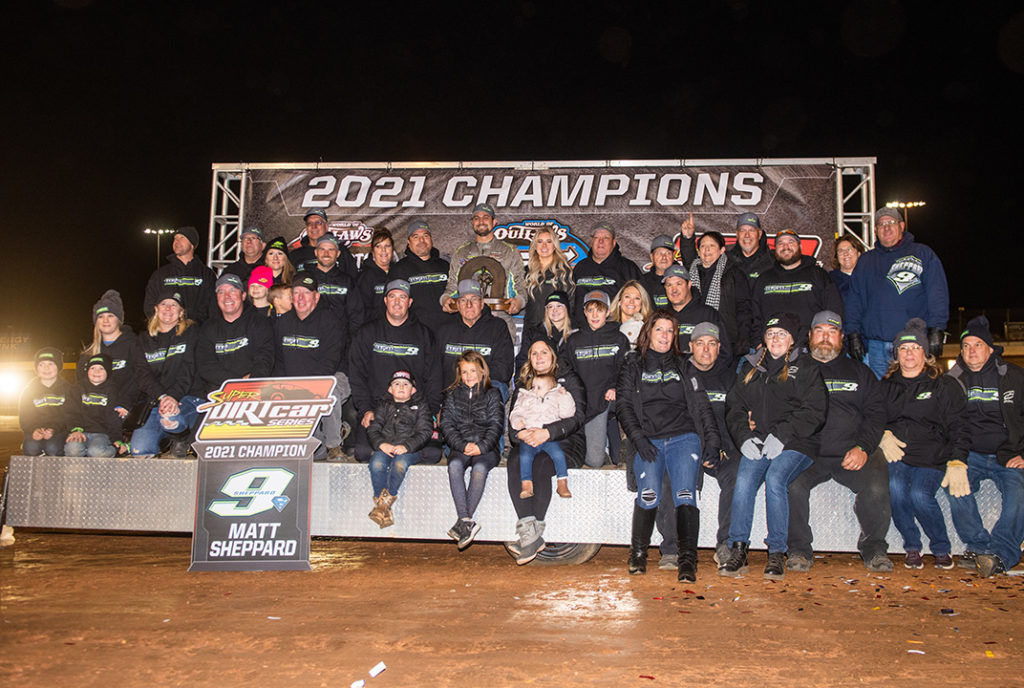