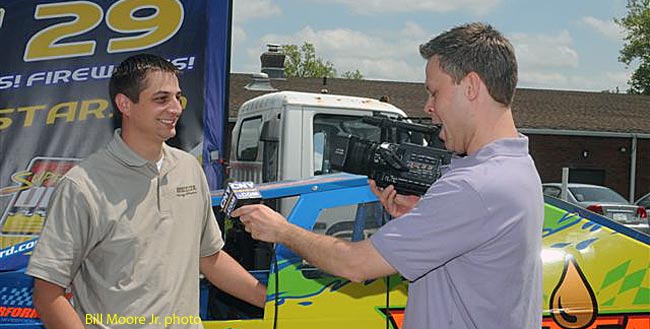 Sheppard, 28, of Waterloo, N.Y., joined DIRTcar officials in a formal press conference and conducted interviews with two Syracuse television stations while standing in front of his JB Motorsports Bicknell No. 9s, which he will enter in the third annual DIRTcar All-Star Weekend event this Sunday evening (May 29) at Rolling Wheels Raceway Park in Elbridge, N.Y.

“We’re definitely excited about running at Rolling Wheels on Sunday,” said Sheppard, who begins his chase of a second straight Super DIRTcar Series title in the 60-lap, $6,000-to-win feature at the five-eighths-mile ‘Fast Track.’ “The Super DIRTcar Series events are the biggest races of the year for us, and the All-Star Weekend is a great way to get the season started. Hopefully we can pick up where we left off last year.”

Hachmann enthusiastically looked ahead to Sunday’s spectacular at Rolling Wheels, pointing out the unique atmosphere that will overtake the speedway on the eve of the Memorial Day holiday.

“We’re really focusing on the fans and their overall experience during the DIRTcar All-Star Weekend,” said Hachmann. “Their experience will start from the moment they walk through the gates. (DIRTcar Northeast public relations director) Amanda Hirko has helped put together a great midway area that will include merchandise for drivers, interactive games, bounce-houses for kids, a DJ – even new menus in the concession stands.

Hachmann also revealed that the Grand Marshal for the DIRTcar All-Star Weekend will be Mike Hopkins, a former standout basketball player at Syracuse University who now serves as the top assistant to legendary Orange coach Jim Boeheim. Hopkins will visit the Wheels to give the command to start engines and wave the green flag over the Super DIRTcar Series lidlifter.

Reserved-seat tickets for the DIRTcar All-Star Weekend event, which also includes DIRTcar Sportsman-Modified competition and the DIRTcar Pro-Stock/Stock Car Challenge, are available for $28 on-line at www.dirtcar.com/tickets. General admission tickets, meanwhile, are $25 for adults, $10 for students (ages 10-17) and free for children 10-and-under.

Fans who purchase reserved or general admission tickets by May 27 will also receive a free pit pass to get an up-close look at the cars and stars prior to the start of the evening’s action.