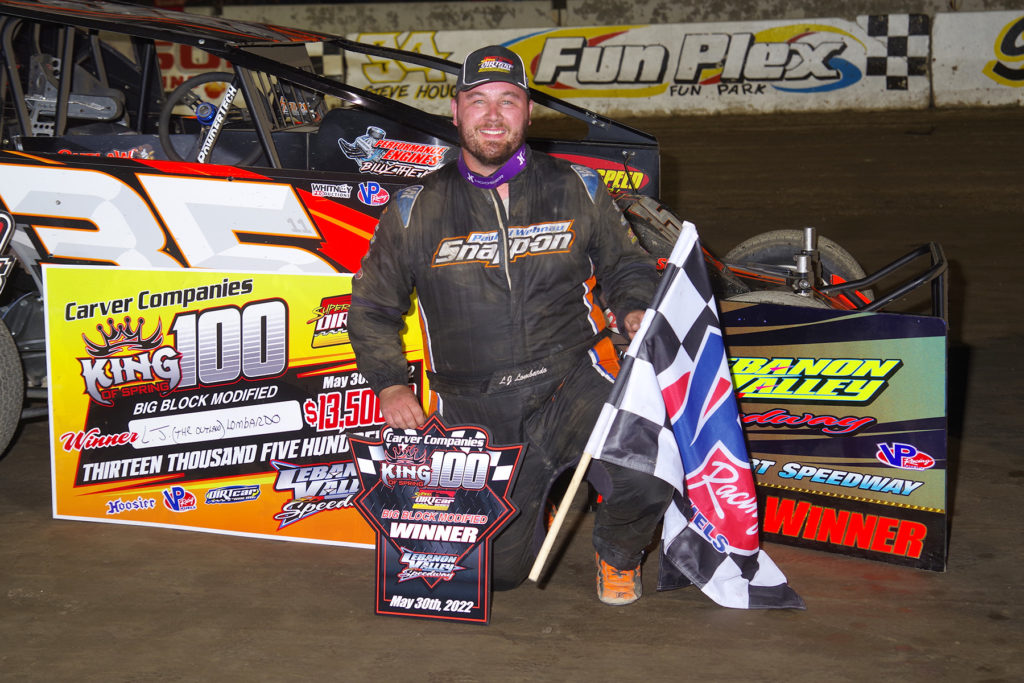 LJ Lombardo has seen his fair share of laps around the high banks of Lebanon Valley Speedway as a weekly double-duty driver at the half-mile oval. But one thing he’d yet to see was a big-time win in front of the crowd that knows him best. That was, until Monday night.

In the ultimate test of track position and conservation, Lombardo outlasted the Super DIRTcar Series regulars in the King of Spring 100 for his first career win with the tour, a $13,500 check and a coveted guaranteed starting spot in the 50th running of the Billy Whittaker Cars 200 at NAPA Super DIRT Week.

“I’ve been dreaming of this since I’ve been a little kid,” Lombardo said in Victory Lane. “I’m speechless.”

Lombardo fought for his place in Victory Lane every lap, as several of his contenders came with successful resumes from previous track runs. Most noteworthy was local foe Andy Bachetti, the four-time and defending Big Block Modified track champion from Sheffield, MA. Additionally, defending Series champion Matt Sheppard entered the King of Spring 100 as the defending winner and two-time “Mr. DIRT Track USA.”

Lombardo managed a fourth-place finish in Qualifying, then fought his way into third place in his Heat Race, setting him up to pull the outside pole in the redraw. Peter Britten drew the pole position, while Sheppard drew fifth and Bachetti drew eighth.

Lombardo showed he was ready to rumble from the start, maintaining the second position and constantly putting pressure on Britten in the lead until Lap 18.  He took over the lead for the first time, sliding past him coming into Turn 3. He stayed there for 13 laps, dropping back to his original starting position only after Bachetti flexed his weekly experience on the high banks and made the move for the lead.

Bachetti remained in the lead for the next 40 laps, only to be met by a stroke of bad luck with his transmission giving out, bringing out caution and rendering him unable to finish. As he was pushed back to the pits, his home-track fans gave him a warm applause, acknowledging his success up until that moment.

After Bachetti’s exit, there was no one standing in the way of Lombardo reaching clean air, and he did not hesitate. He raced clean for the final leg of the race, and crossed the finish line first.

“I left it all out there,” Lombardo said. “That last caution, I did not want to see.”

“Honestly, I didn’t even see [Bachetti] pull over. He was on the front-stretch and we were on the backstretch. I saw the people clapping and I’m getting into my head. I’m getting pumped trying to beat him in Turn 1 like he did with me. But you don’t really think about that stuff, you’re here to get the job done.”

After starting seventh on the grid, Marc Johnson fought his way into contention, taking over the third slot on Lap 30. He stayed there until Bachetti’s exit, leaving only Lombardo to chase down. Johnson has plenty of familiarity with the oval, recording a Big Block Feature win earlier this season in weekly competition.

“I really wasn’t sure what we had going into the Feature, but I knew on lap one the thing was on point,” Johnson said. “I had a car I could move around with, move forward. We got some breaks early and conserved the tire for the majority of the race and the pushed it when I had to. LJ was good. He deserved to win.”

St. Catharine’s, ON-driver Mat Wiliamson finished the night’s Feature race in fourth. Coming into the event, Williamson trailed only Friesen in the standings by 26 points. At the end of the night, Friesen’s lead was cut to four points, shaping up for a tight battle throughout the rest of the season. Matt Sheppard moved from fifth to fourth in points with a 14th place finish.