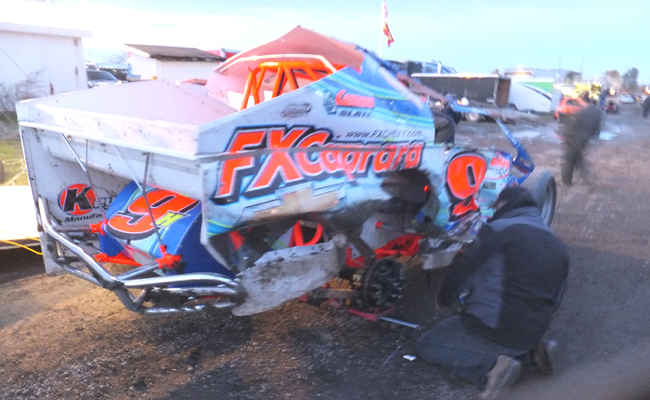 Sheppard caught the frame of the FX Caprara/Mohawk Northeast Inc. HBR Racing No. 9h on the heavy edge of the top of turn three and barrel rolled over the steep berm during his qualifying heat.

He came back out in his back-up car and finished fifth in the consolation race, started 29th in the Thousand Islands RV Fall Nationals 100 and then fought his way up through a stellar field for his 12th top-5 finish of the season.

“That’s the first time I’ve been over in 26 years of racing,” Sheppard said. “The frame caught a big chunk of mud and it lifted me. Once you start over the edge there, you’re gone.”

Sheppard didn’t appear to be very competitive during the consi, but he was passing cars from the drop of the green in the main event. He was seventh at the halfway mark and rose as high as fourth before Chris Raabe rallied late and went by him.

“I was just feeling that car out in the consi,” Sheppard said. “We’ve run it some this year. It was the car we won a series race at Canandaigua with. We made a bunch of changes before going back out and it went pretty good.”

The make-up of the twice rained-out Brewerton race leads into a three-day blockbuster event – “Last Call at the Port” – at Weedsport Speedway October 23-25 which includes the Big-Block Modified $20,000-to-win All Ways Concrete Pumping 150 Saturday, Oct. 24.

“We want to win every time out, but we need to finish races up front,” Sheppard said of his bid for a fourth Super DIRTcar Series title. “There are still a lot of points up for grabs.”