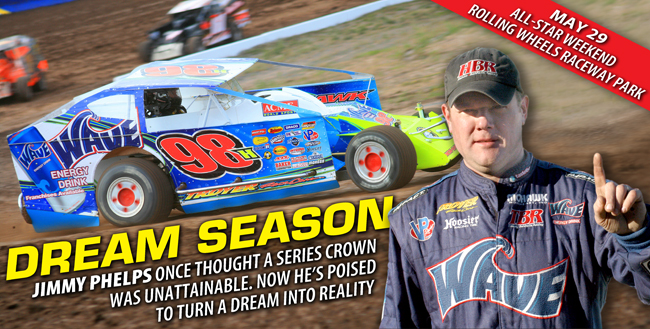 When he and the Super DIRTcar Series kicks off the 2011 season on May 29 in the All-Star Weekend event at Rolling Wheels Raceway Park, Phelps knows it will be another challenging battle against drivers like defending champion Matt Sheppard and seven-time champion Brett Hearn. But Phelps is as prepared as he’s ever been to take the final step to the top of the podium.

“We’re going into the season with the expectation that we’re going to be one of the guys battling for the championship,” said Phelps, 36, of Baldwinsville, N.Y. “I don’t think it’s going to fall into our lap. We’re going to have to keep doing what we’re doing. The big thing we’ve tried to continue to do in the off-season is work on our weaknesses. We still have a few tracks where we were a little bit off. I think if we can iron out those particular tracks and get a handle on some of the stuff we struggled with last year I don’t think there’s any question we can come out on top.”

Neither Phelps nor the Heinke-Baldwin Racing team need major adjustments to contend, instead they’ll focus on fixing the small issues that cost them points in the heart of the season.

“You sit down at the end of the year and when you backtrack your points picture, obviously there are probably a night or two where you’re running well but you break, those things are going to happen and you look at why you broke and see what you can fix,” said Phelps, who drives the #98H Wave Energy Drink-Mohawk Northeast Troyer on the Super DIRTcar Series tour. “There are some tracks where we ran really well, where we won some races. Then you look at the tracks where you thought you struggled a little bit, and tracks where you gave away some points away. That’s where we need to work. You put the nights that you struggled in front of you and try to determine what the major reason was for why we struggled at each track. You try to pick it apart and see if you can find a reason, or something might need to change to help you in those particular situations. At the end of the day, it’s a guessing game.”

He almost guessed right last season, going to the World Finals in Charlotte and winning the first of two feature events to close the gap on Sheppard, who held off Phelps by 74 points to win his first Super DIRTcar Series crown. It was as close as Phelps has allowed himself to think about what winning the championship would mean.

“I haven’t given it an abundance of thought,” said Phelps, who has finished in the top three in points in each of the past three seasons. “Growing up it was something I dreamed of doing, but it got to the point where it seemed a little bit unrealistic because we weren’t able to travel. Then all of a sudden I got the opportunity to drive for HBR and things kind of snowballed from there. Now it’s why we’re doing what we’re doing. It’s why we test. It’s why we race as much as we do on the weekends, to stay sharp. We’re 100 percent focused on trying to accomplish it and obviously we’re very hungry for it. What will it mean when it’s over? Who knows? But hopefully we’ll find out.”

The championship battle begins May 29 with a huge day of racing and pageantry, beginning with the DIRT Hall of Fame induction ceremony in Weedsport before everybody shifts to Rolling Wheels for the 60-lap Super DIRTcar Series Big-Block Modified opener, the Safety-Kleen Shootout for Safety-Kleen Mr. DIRTcar Big-Block Modified points leaders and the Pro Stock/Stock Car Challenge.

“I think the All-Star Weekend is growing into a premier event,” Phelps said. “The Hall of Fame inductions have become such a historical part of the DIRTcar Series season that I think it warrants a big show in conjunction with it. As far as moving it to Rolling Wheels, I’m all for it. I think Rolling Wheels is a marquee facility.”

Like so many others who have competed through the years on the Super DIRTcar Series circuit, Phelps has achieved his success in part because he continues to compete on a weekly basis in Central New York in his family-owned #99J Troyer. Phelps believes strong weekly competition leads to a competitive Super DIRTcar Series tour.

“It goes hand in hand,” he said. “First off, to make something special you need it to stand out. To make the Super DIRTcar Series special, you need to combine the Super DIRTcar Series regulars with a good, strong field of weekly racers to bring the excitement. If a track doesn’t have a weekly program and they bring an event to their track, there’s really nothing to make it special. I’ll be honest with you, it shows in my opinion when the Super DIRTcar Series shows up at a track that does have a strong weekly program, they have a very successful series race. The fans want to see their guy beat the series guys, or they might have some series guys they like to watch race and they don’t get the opportunity until they come to town.

“For the most part, if you look at the series field, it’s a group of guys who still race weekly and love the weekend grind. You take that away and guys find something else to do with their time, and next thing you know there’s not a field of Modifieds to run your series so it goes hand-in-hand no doubt.”

Phelps already has a couple of weekly races under his belt this season as he looks ahead to the All-Star Weekend and getting the 2011 Super DIRTcar Series tour under way after a long winter.

There’s no doubt Phelps will be a contender beginning with the All-Star Weekend and continuing through Super DIRT Week and eventually the World Finals. By November, he might finally begin finding out what a championship really means.

Reserve your seat to see Jimmy Phelps and the Super DIRTcar Series at the All-Star Weekend by clicking www.DIRTcar.com/tickets . Reserved seats are available for $28, while adult general admission seats are $25 for adults, $10 for students (ages 10-17) and FREE for children 9 and under. Fans who purchase grandstand tickets by May 7 will receive a FREE pit pass.