CONCORD, N. C. – November 3, 2012 – The championship is on the line for the last race of the season for the Super DIRTcar Series, with 150 points at stake. Updates available HERE, or check out interactive live race notes for all three series, the Super DIRTcar Series, the World of Outlaws Late Model Series, and the World of Outlaws Sprint Car Series HERE.

11:40 p.m. Matt Sheppard finished fourth in tonight’s Super DIRTcar Series feature event, giving him enough points to keep the point lead and take the series championship – an unprecedented third in a row. Sheppard and his team are exhilerated to have logged one in the record books.

Sheppard’s goal for next year? RACE! His only disappoint going into tonight’s finale was how much he played it safe. With Hearn in the lead, Sheppard knew he could still keep the championship so long as he finished 14th or better. Certainly a manageable feat for the champion, unless a mechanical issue or wreck were to put his 9s in the pits. Sheppard hopes to be able to be in a position next year to “bring it” at The Dirt Track at Charlotte.

Hearn celebrates amazing season
11:30 p.m. Brett Hearn beat out Peter Britten for the lead in tonight’s Suepr DIRTcar Series A-Feature, and the victory in the series finale caps off an amazing season for the Madsen Motorsports team. Winning Mr. DIRT Track U. S. A. at Lebanon Valley Speedway, the legendary VP Small Engine Fuels 200 at the New York State Fairgrounds in Syracuse, the Eastern States 200 at Orange County Fair Speedway, and today’s finale makes Hearn’s season an “in your dreams” type of year – if someone predicted a driver would win all four, you’d just have to say “in your dreams.”

For any driver, Hearn’s big wins have, combined, been a feat beyond imagining; the fact that he did it just after sudden illness took him to the hospital, forcing him to miss two Super DIRTcar Series races, makes his success this year all the more surprising.

Let the battle begin…
8:00 p.m. Australian Peter Britten drew the pole for tonight’s A-Feature. Britten, a three-time national modified champion in Australia, ran a partial Super DIRTcar Series race in 2010 and, despite his stellar record in the Land Down Under, has not yet seen a win in the Super DIRTcar Big-Block Modified Series. If he can grab the lead on the start and keep it through 40 laps, tonight could be his night.

And who’s sharing the front row with Britten? None other than Baldwinsville’s Jimmy Phelps, who trails point leader Matt Sheppard by 72 points and is still in the running for the series championship. It won’t be an easy path to the title for him, with Sheppard starting third in the grid and Hearn, second in points, starting fourth.

Perhaps the only certainty about tonight’s Big-Block Modified A-Feature at The Dirt Track at Charlotte is that it’s going to be a battle to the very finish. 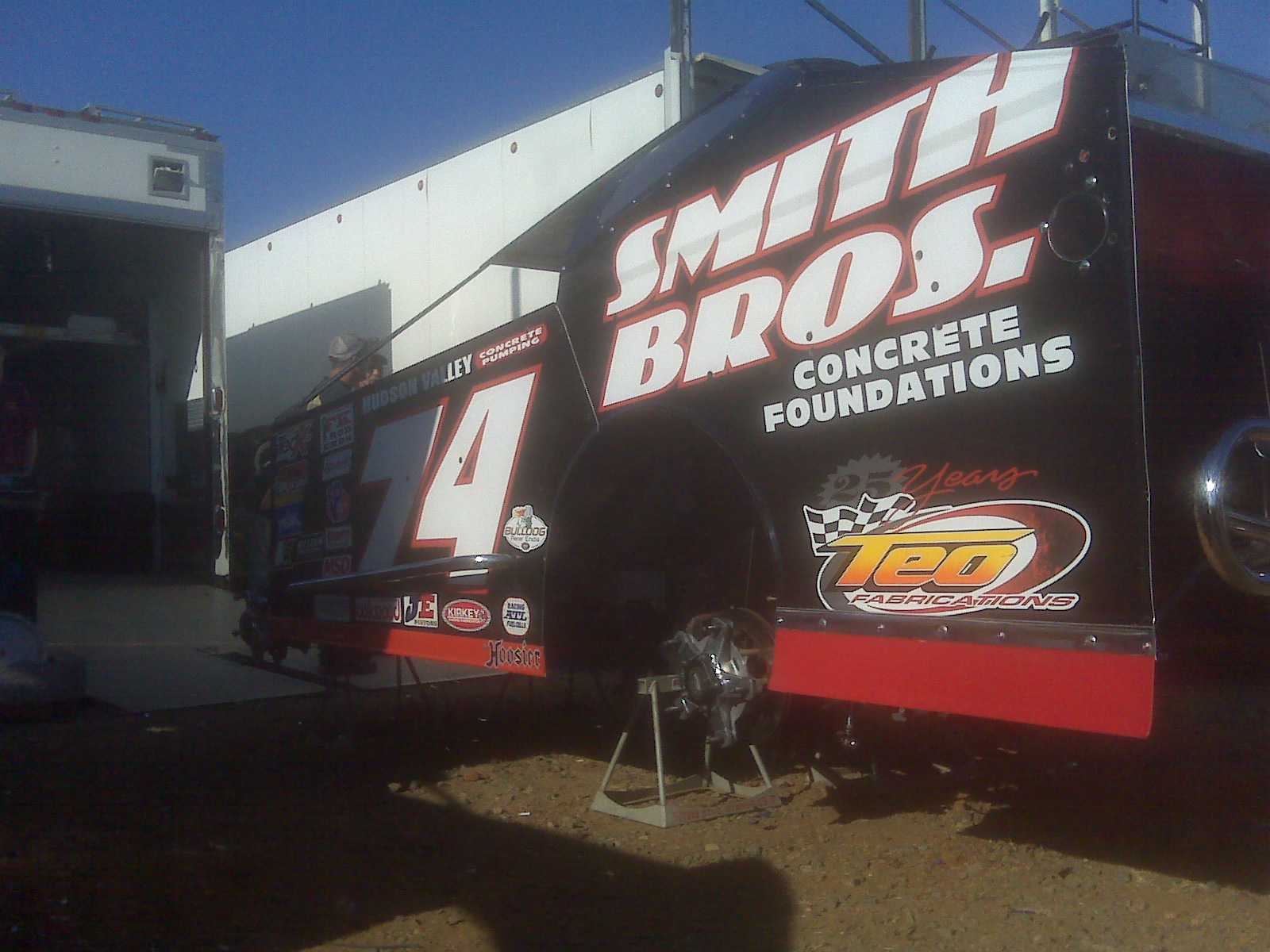 Will the “Empire Executioner” make the same selection tonight, one that last night’s runner-up Tim McCreadie pointed out could be more risky than what the other drivers choose? When asked, Fuller, his team, and his owner said they’re waiting to see what the track is like before they make any decisions.

Last chance to get in the last race
3:30 p.m. Following tonight’s opening ceremonies, the Big-Block Modifieds will roll onto the 4/10-mile track at The Dirt Track at Charlotte for their last B-Main of the season. B-Mains are competitor’s last chance to qualify for the feature – the remainder of the qualifying events took place Thursday.

B-Feature starting lineups are below. The top four finishers will transfer to the A-Feature – the partial lineup for that is below as well. In addition to the B-Main, tonight’s redraw will help complete the lineup. The top two from each of Thursday’s heat races qualify for the redraw, and tonight they will take part in a random drawing for the top 8 spots. The top 3 in points – Jimmy Phelps, Brett Hearn, and Matt Sheppard – all qualified for the redraw, and so all are in a good position to take home the championship trophy.

Sheppard in good shape, not locked in

1 p.m. Series point leader and two-time consecutive champion Matt Sheppard, of Waterloo, N. Y., is still in the lead after last night’s twelfth place finish, but only by 60 points. Hearn is second and Phelps is in a close third, putting the top three within shooting distance of one another for tonight’s 150-point, 40-lap feature.

If Hearn wins tonght’s race, Sheppard would have to place 14th or better to maintain his lead and win the series championship. If Phelps wins tonight, Sheppard would need to place 17th or better. If Sheppard’s 9s has a better night than last night at The Dirt Track at Charlotte, he stands a good chance; if it doesn’t, well…you can do the math.

What would you like to see? A third series championship for “Super Matt” Sheppard, or a new set of hands holding tonight’s championship trophy? Tweet your thoughts with the hashtag #AllDirtRoads or join the interactive chat later this afternoon.