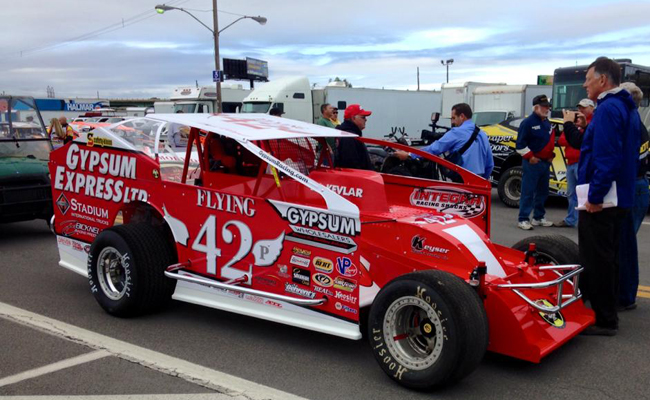 For Ward, 57, coming with your best stuff to the NAPA Super DIRT Week “Finale at the Fairgrounds” that runs Wednesday through Sunday, includes having his Gypsum Express No. 42p Big-Block Modified painted and vinyl lettered in the motif his father “Bud” displayed when he raced in 1970s.

“When Larry (LJL Racing teammate Larry Wight) brought these panels to the shop I really appreciated it,” Ward said. “They give the car the same “Flying Wings” look my dad’s cars had. I used to help him letter and paint his cars when he raced at places like Waterloo, Weedsport and Five-Mile Point.”

Ward’s throwback look for his No. 42p is not only tribute to his father, it marks his 42nd season of racing.

“My dad passed away last year,” Ward said. “He had been my crew chief all along.”

Ward has five career wins on the Super DIRTcar Series circuit and over 60 Big-Block Modified wins in all. He won the 1998 Labor Day 50-lap event at the Fairgrounds, but he has never won the 200.

“I ran out of fuel while leading the race on lap 110 one year, hoping for a yellow that never came,” he said.

“I hope the fans have a good time this weekend,” Ward added. “There’s been a lot of history made here – a lot of memories.”

Teams and campers roll into the New York State Fairgrounds on Wednesday morning as the event officially kicks off for the final time at the Moody Mile.