Rob Hile’s passion for helping his brother is not only apparent at the racetrack but in his career.

It actually helped pave the way for it.

“If I’m going to be 100% honest, Chris was always a better driver than I was,” Rob Hile said. “It was one of those things where he’d go out, run fourth and I’d be a 10th to 12th-place car. It’s one of those things, if you go out there, I’m a competitive person, if you go out there knowing you have no chance to win it took a lot of the fun out of it. As much as I enjoyed doing it, I enjoyed watching him run just as much.” 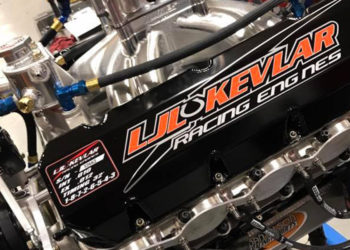 He made the decision to step out of the car and transition to a crew member role, which eventually evolved into his current profession of building engines for Chris and several other big names in the Northeast Modified divisions.

Hile works in the engine shop at Gypsum Express, a part of a team of three, with more than 30 customers they regularly attend to for engine work.

Rob’s interest in working on engines begin when he and Chris first started racing. They bought a used engine to start off with and a few races into the season a part broke inside. With limited resources and knowledge – at the time – about engines, Rob, Chris and their dad went to a Barnes & Nobles, bought a “How to Rebuild a Small Block Chevy” book and tore apart the engine themselves.

“We ran that engine for a bunch of years until we finally kind of got out of it,” Rob Hile said. “I always enjoyed that stuff growing up, tinkering around with small engines. That kind of thing. I had the RC cars, the Nitro engines and all that kind of stuff.”

When Hile transitioned to crew worked, he got the opportunity to work as Larry Wight’s crew chief on the Gypsum team. Their tenure lasted for five years before Hile wanted more time to help his brother’s racing endeavors again. To keep him in the Gypsum family, Hile moved into working at the Gypsum engine shop, allowing him more time to help Chris and continue to help Larry by building his engines.

“The nice thing with Chris is Gypsum helps him out,” Rob Hile said. “I can tinker on his engine on my lunch break and after hours which saves us a whole bunch of money on the labor and that kind of thing because I can do it on my own time.”

Their schedules got even busier last year when Chris made his maiden voyage as a full-time driver on the Super DIRTcar Series tour. Other than a bit less time at home between juggling a day job and working on the race car every night, Rob said there were really no changes with the move, including with their engine program. Their packages have been about the same for the last 10 years. And they hardly vary throughout the year, too. 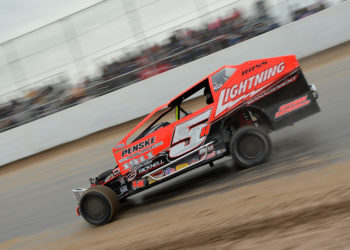 The engine Chris used to set the track record at Bristol Motor Speedway last year is the same engine he used for weekly shows at Brewerton Speedway. It also helped propel him to four top-fives and seven top-10s for the season that also ended with the Rookie of the Year title. Now, they look toward their sophomore season this year and chasing their first Super DIRTcar Series victory.

The success he’s had as an engine builder and the success Chris has had as a driver were all made possible with Rob’s passion for the sport and passion for helping his brother.

“It benefited the both of us,” he said.

Chris Hile, Larry Wight and the rest of the Super DIRTcar Series stars will kick off the 2022 championship season at Bridgeport Motorsports Park for the King of the Big Blocks on Tuesday, May 3. For tickets, CLICK HERE.

If you can’t make it to the track, you can watch every Super DIRTcar Series race, including the 50th NAPA Super DIRT Week (Oct. 3-9), live on DIRTVision – either online or by downloading the DIRTVision App.