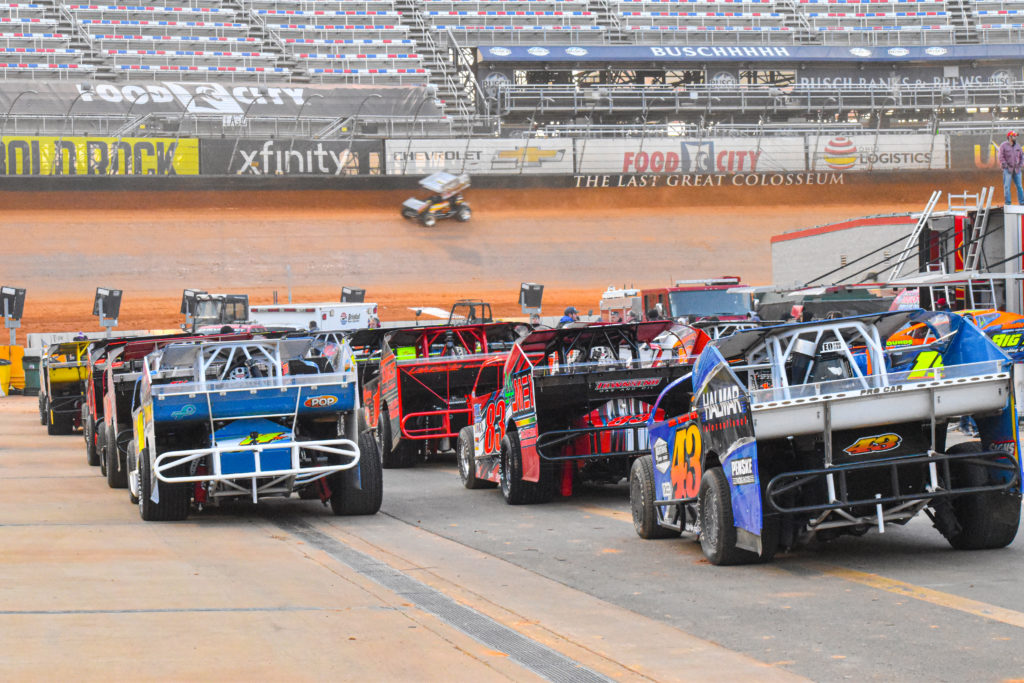 BRISTOL, TN –  The excitement and anticipation finally came to a head at Bristol Motor Speedway when the Super DIRTcar Series Big Block Modifieds turned its first-ever laps on the famed Tennessee half-mile. Mike Gular, driver the #2A, laid down the fastest lap overall with a 17.361 second lap, which means he drove at an average speed of 112mph.

While many of the drivers were in awe of racing in The Last Great Colosseum, they quickly turned their focus toward turning the quick laps.

Four other drivers topped their respective groups: Stewart Friesen, Marc Johnson, Matt Sheppard, and Max McLaughlin. The track remained consistently fast all night. Drivers were utilizing the bottom, middle, and top to get around the track, which bodes well for the 40-lap, $10,000-to-win, NAPA Super DIRT Week qualifiers. Gular, from Greene Lake, PA, was the only driver to enter the 17.3 second bracket around the half-mile. His time of 17.361 edged Stewart Friesen by just .042 seconds. Although he clocked the fastest lap overall, it took some time for him to find the sweet spot.

“We’re just trying to find whatever speed we can get,” Gular said. “We’re gaining on it. We went from twentieth-something to running the fastest lap so we are happy. We’re going to keep trying a little bit more here.”

The speeds were impressive and the track created multiple lanes of racing from the bottom to the top. However, it did not slow down much as the night progressed. The top times in all the sessions were separated by the smallest margins.

“The track is getting a shine to it but it’s not slowing down at all,” Gular noted.” I think the goal is to go flat around this place. That’s what we’re dialing it in to do.” Stewart Friesen, from Niagara-on-the-Lake, ON, ripped his Halmar Racing #44 around the Bristol high banks in only 17.411 seconds during the first practice session of the evening. He barely topped Larry Wight and Jack Lehner on the final lap of the session.

“It’s pretty awesome,” Friesen said. “I’m proud of the Halmar guys. It’s really good to unload fast and be quick time in the first session.”The car started out a little tight and then it freed up in the second session. I don’t think the tires came in as well as the first. It’s badass. It’s a lot of fun running around the top. I hope that continues.”

Friesen participated in both the NASCAR Camping World Truck Series race as the NASCAR Cup Series race at the end of March. No one has turned more laps on the dirt at Bristol than him but the Big Block is much different than a stock car/truck.

“It’s way different than racing in the truck,” Friesen noted. “When you sit in the truck you sit so low with the big body all around you, and then sitting in an open cockpit car like a modified here you can see so much more. It feels like you are going a heckuva lot faster. It feels almost as fast as going around on asphalt.” Marc Johnson, from Guilderland, NY, is coming off a huge win at the Albany-Saratoga Speedway opener. He dominated a field that held a significant number of Series drivers. Now he’s wheeling the #3J at the top of the charts on Bristol Motor Speedway. Johnson was quickest in practice session two running a 17.542 sec. lap.

“We’re trying to learn the track and find speed,” Johnson said. “I’m just trying to feel where the car is best for me. In the beginning I was almost flat but I felt better rolling out of it a little and keeping the car straight. If guys are wide open out there then God bless them.”

One of the best parts of the evening was how the track was able to be fast on the top, middle, and bottom grooves.

“The track is very racy but it’s still a huge challenge.” Seven-time Series champion Matt Sheppard, from Savannah, NY,  wasn’t necessarily looking to top the charts but via his process of getting comfortable on the Bristol banks, he did. Sheppard ran a 17.522 sec. lap in the fourth practice session of the evening.

“We were looking at all aspects, not just qualifying,” Sheppard said. ‘We’re monitoring tire wear and scuffing some tires for the weekend. We were working on short-run speed and I guess we’ll digest it all tonight and see if we can sort it out for tomorrow.” “We put more fuel in the car for this run because it was 8 laps and wanted to see how the car would turn with the extra fuel,” McLaughlin said. “I made a change that I wanted to try and it definitely helped. Honestly, it was weird, I was decent the first half of the run but in the second half started driving it like the asphalt car here. It just was like a different race car. Once I calmed down a little bit and drove it like the asphalt stuff here it was like a familiar Bristol.”

McLaughlin has experience running at Bristol in the NASCAR K&N Series and he recently got some advice from a driver who turned thousands of laps at Bristol on the pavement.

“Last week I was teammates with Ryan Newman at Martinsville and he told me to drive it exactly the same,” McLaughlin noted. “It clicked in my head on that run and I drove it like that and it helped a lot.”

The #32 was fast but the driver played it safe.

“I wasn’t running up top at all like those other guys. The car wasn’t turning as well as I think it should and I’m not going to put it in the fence in practice.”

The excitement level is ratcheted up another notch as the Super DIRTcar Series Big Block Modified race for $10,000 and a guaranteed starting position at NAPA Super DIRT Week in October. Forty laps are set to separate the best of the best at Bristol Motor Speedway. Get your tickets now at BristolMotorSpeedway.com. If you can’t make it to the track, be sure to catch all the action live on DIRTVision.