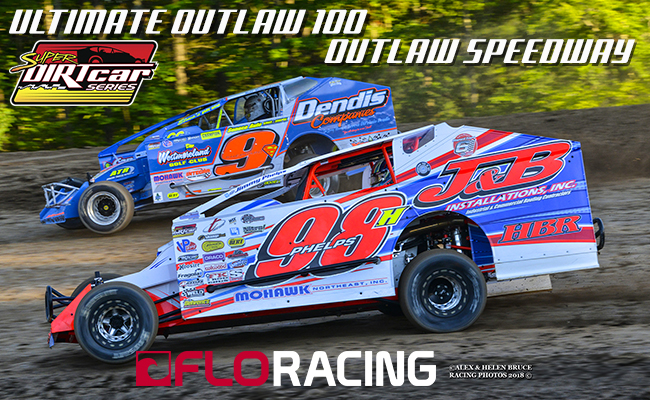 CONCORD, NC – July 6, 2018 – On Tuesday, July 10 the Super DIRTcar Series Big-Block Modifieds will invade Dundee, NY for the Ultimate Outlaw 100 at Outlaw Speedway. Only two Series races have been contested on the 4/10-mile Finger Lakes Region oval, but that does not mean the stars of the Super DIRTcar Series are any less determined to become the next Ultimate Outlaw. With the Series Championship race heating up, Series drivers are anxious to test their mettle once again and go the 100-lap distance for maximum points.
Last year’s visit marked the first Super DIRTcar Series race at Outlaw Speedway in seventeen years. Billy Decker won the event in the no. 91 MPR and became the first Ultimate Outlaw. Decker held off numerous challenges from Larry Wight and Matt Sheppard to maintain the top spot. The MPR team has struggled in the early part of the season, but last year’s victory at the .4-mile dirt track could give Decker the confidence he needs to turn the 2018 season around.

Max McLaughlin and his HBR teammate Jimmy Phelps have consistently finished in the top three. Both drivers are poised to click off victories, but Sheppard and Stewart Friesen have spoiled them thus far. Phelps took a weekly Big-Block Modified win at the Land of Legends but has yet to find Victory Lane with the Series in 2018.

Never count out Erick Rudolph and Tim Fuller. Both drivers have quietly maintained their position in the top five in points and look ready for podium finishes. The first Super DIRTcar Series clash at Outlaw Speedway took place way back in 1990 when The Doctor Danny Johnson captured the checkered flag. Johnson sits eighth in points and has not made a trip to Victory Lane yet in 2018. Can he recapture the magic of his win 18 years ago? Series points leader Matt Sheppard also sits on top of the Outlaw Speedway weekly points race, with veteran Alan Johnson on his heels. Both drivers will certainly be factors on July 10.

One adult grandstand general admission ticket is $20. If you can’t make it to see all the action in person at Outlaw Speedway, you can subscribe to our partners at FloRacing and stream the race live in high definition.