One More Time Around with Mike Perrotte 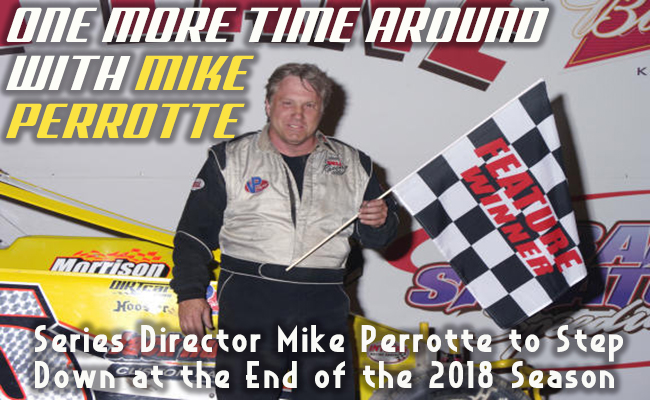 CONCORD, NC – May 22, 2018 – As rain continues to plague the onset of the 2018 Super DIRTcar Series season — leaving not a single race run since McCreadie’s late race charge past Stewart Friesen for the DIRTcar Nationals Big Gator on February 17 — already Series Director Mike Perrotte is thinking ahead and planning for upcoming years. It won’t be until Monday, May 28 that the Big-Block Modifieds will come to life under his watch again. This race will have a notable significance to Perrotte as it will be the first Series race to run since he decided 2018 would be his last as Series Director. The NY native plans on retiring from Series management at the end of the season, remaining in the DIRTcar family as a driver.

Perrotte’s deep racing roots have played an important role in how he handles the challenges of directing the Series. Born in Plattsburgh NY, Mike Perrotte attended modified races at a very young age at the legendary Airborne Park Speedway. At home, he winged his field kart around dusty backyards, imagining he was the great Charlie Trombley or Bob Brumo taking victories behind the wheel at Airborne.

When he was 16 Mike got his first taste of true speed. He went drag racing. But soon the call of the short track oval was too much, and he set out to build his first Modified. Perrotte now looked up to drivers like Jack Johnson, Wes Moody, and Bob McCreadie. He wanted to win races like them. To this end he started his oval career on the asphalt at Airborne Park Speedway in the 1970s and made the transition to dirt in the early ‘80s. It was during this period that Perrotte experienced one of his greatest racing moments:

“We won four races in a row. Four Features in a row is something that was kind of cool. It was 1987 — Devil’s Bowl, Malta, Airborne. Four days. Four wins. It was just timing. The stars were lined up. We didn’t do anything different.”

After a year of promoting Airborne, the stars aligned again. Perrotte became the Series Director for the Super DIRTcar Series. He couldn’t turn down the opportunity to work with one of the largest sanctioning bodies in the country.

Under his guidance, the Super DIRTcar Series and the DIRTcar Northeast have thrived. According to Perrotte, the success of the Series is built on team work and all the good people surrounding him. “Everyone’s looking out to make things run well,” he said.

He trusts his team to make decisions, because when they do, he knows they’ll do it with the health of the sport in mind, from customer service to making tough calls on the track. His team is professional and always looking to improve. The officials, the great drivers, teams, tracks, and promotors working together have all contributed to the success of the Series do.

Mike sees three distinct challenges facing the sport as it moves forward. One is making racing as affordable as possible. Perrotte pines for the days of the 1960s when a championship-winning race car could be built in a barn:

“Everyone went to the junkyard, bought a ‘57 Chevy frame, put a coupe body on it, and everything was done with a torch and a welder. In the ‘80s guys started building cars to sell. Nobody builds their own cars anymore. You could run the same car on asphalt as you could dirt. The tracks were doing well. Things were a lot simpler.”

The second greatest challenge is getting fans to the track. Perrotte sees the car count as a part of that equation as well. More cars means more friends, families, and fans in the seats.

And finally, the rulebook. The common rulebook is a boon for DIRTcar Racing in the Northeast and Canada, but that doesn’t mean there aren’t challenges. Perrotte says the calls they make are to ensure the future viability of the sport. It’s inevitable that someone will disagree with a rule package, amendment, or call.

Perrotte points to the DIRTcar Sportsman Modified division as a strong indicator of the sport’s strength in the Northeast. Much of the success of the Sportsman division is owed to how relatively affordable the cars are. The challenge is in getting them to graduate to a Big-Block Modified or 358 Modified.

“Many Sportsman drivers would be competitive in Modifieds or 358s if they had the budgets. There is great talent there, but we need to encourage the advancement. Fortunately, there have been 50 W16 engines sold in the year two years. There is a market for it to bridge the gap between Sportsman and Modified divisions. It’s not meant to replace the built 358 motors, but it has shown to be fast with the right shoe. Matt Sheppard won at Utica-Rome with a W16.”

Team focus, fostering the pipeline of talent, and working together with tracks, promotors, and drivers to make a better racing experience for everyone will be Mike Perrotte’s legacy as Director of the Super DIRTcar Series. He’ll be with us until the end of the season and will work together with the next Director to ensure stability and continued success. And you won’t miss him at the track. He’ll be in the cockpit of the No. 35.