ONE FOCUS: Points racing is no longer on Matt Sheppard’s mind, only wins

With five races remaining on the 2022 Super DIRTcar Series tour and a 123-point lead entering the Malta Massive Weekend on Saturday, Matt Sheppard has one focus.

“The heck with the points racing. We want to win races,” said Sheppard, of Waterloo, NY, as he eyes his ninth Super DIRTcar Series title this year.

“I think we’ve been good enough all year to give us enough of a cushion to concentrate on winning races from here on out. We want to win [the Malta Massive Weekend at Albany-Saratoga Speedway], we want to win Super DIRT Week and we want to win at World Finals.”

Currently, he has the most wins of all Series drivers this season with five – the most he’s had in a season the last two years – along with the most top-five finishes (10) and top 10s (12). That’s helped him build a 123-point lead over 2019 Series champion and two-time and defending NAPA Super DIRT Week champion Mat Williamson.

He’s currently on a streak of 10 top 10 finishes in a row; eight of them being top fives.

There’s not one thing he could point to for the success this year. Just the “little things,” he said.

“We’re getting more and more experience with these coil cars,” Sheppard said. “I don’t know if our notebook is better than other guys’ or what but we’re picking from what has worked in the past and what hasn’t, trying not to repeat mistakes. Coupled with luck and a few other things, we’ve had things go our way. I’ve been up and down in this sport enough times that when it’s going your way you ride it for as long as you can because you don’t know when it will end.” 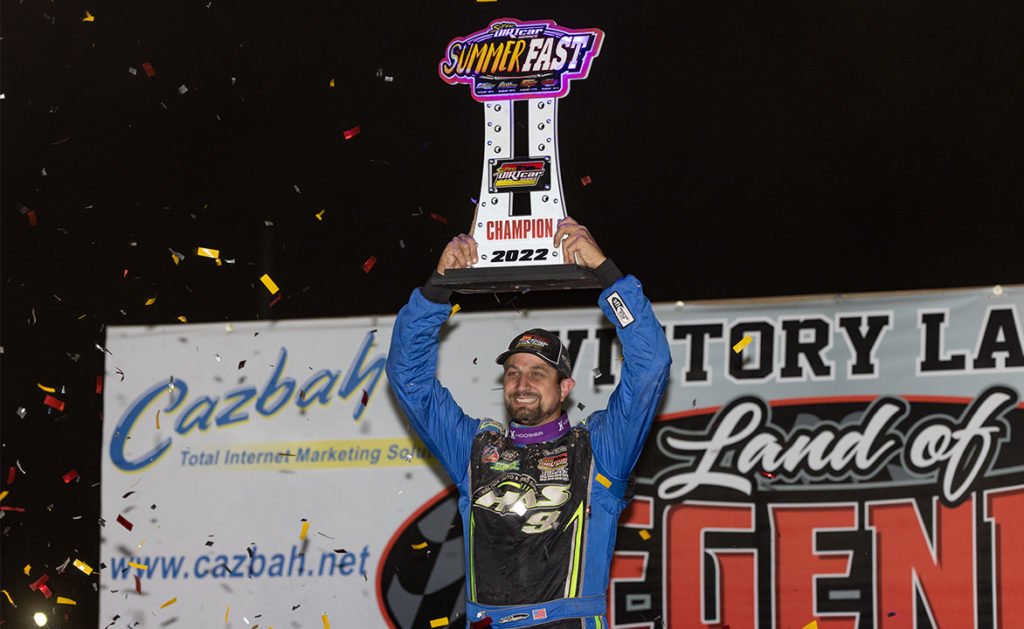 While he has confidence looking ahead to the Billy Whittaker Cars 200 during the 50th Running of NAPA Auto Parts Super DIRT Week, Oct. 3-9, and the championship determining World Finals, Sheppard admitted he’s not sure what to expect for Albany-Saratoga on Saturday, Sept. 24.

He has one win at the speedway, but none with the Series and finished 10th during the Super DIRTcar Series race at the track in June. However, he does hold the track record of 15.397 sec. set last year.

“It seems like track position has been pretty key there the past couple of times we’ve been there,” Sheppard said. “We’ve qualified really good and won our Heats but draw horrible numbers and put us behind the 8-ball. We’re hoping to bring a really good race car there again this weekend and hopefully get a good draw.”

This October, he’ll run double duty again for the first time in a couple years, looking to again sweep the Super DIRTcar Series and 358 Modified events.

“With the 50th anniversary this year, it is something we’re gunning for,” Sheppard said. “Really want to put that trophy in my trophy case.”

A couple of weeks after Super DIRT Week, the season will wrap up at The Dirt Track at Charlotte for the World of Outlaws World Finals, featuring three Feature events for the Super DIRTcar Series this year and an autograph session. It’s where Sheppard will look to hoist the championship trophy for the second year in a row and his ninth overall.

But before he thinks about points, he just wants to win.

If you can’t make it to the tracks, you can watch all the action live on DIRTVision – either DIRTVision.com or by downloading the DIRTVision App.