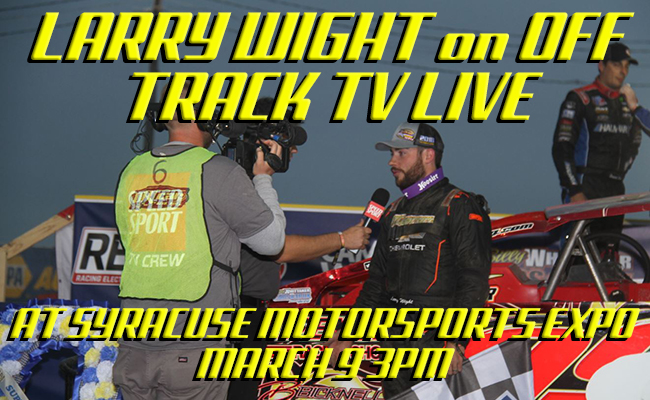 WEEDSPORT, NY (March 6, 2019) – The Weedsport Speedway booth at this weekend’s Syracuse Motorsports Expo, inside the Center of Progress building on the New York State Fairgrounds, will be a hot bed of activity highlighted by a LIVE taping of Off Track TV featuring Modified racers Larry Wight and Ronnie Davis III.
Off Track TV will go LIVE at the Expo on Saturday, March 9, beginning at 3 p.m., as MAVTV broadcast partners Shane Andrews and Dan Kapuscinski bring fans an up-close look at the show along with several interviews with special guests.

Wight, who also now competes annually at the Chili Bowl Nationals, recently announced plans to return full-time to the Super DIRTcar Series while Davis will jump to the Big Block Modified ranks at Brewerton and Weedsport Speedways, while also continuing his 358-Modified program at Fulton Speedway.

Other guests for the show include AFT Flat Track rider, Austin Luczak, Stirling Lubricants’, Scott Baubie, as well as Super DIRTcar Series Director, Dean Reynolds.
Those unable to attend the show in person can watch Off Track LIVE via YouTube Live at the Weedsport Productions Facebook page and on the Off Track TV website at www.offtracktv.com.
The Weedsport Speedway display at this weekend’s Expo will surround the No. 45 sprint car of Chuck Hebing, Erick Rudolph’s No. 25 big block modified as well as the No. 10 Honda CRF450R flat track bike of AFT rider, Austin Luczak.

The Weedsport Kartway will also be on display featuring the No. 00M Slack Karts machine of Dan Kapuscinski and will also provide schedule cards for the 2019 kartway season.
Competitors visiting the Weedsport Kartway booth will be able to pick up 2019 rulebooks as well as register for the upcoming season, which opens on Sunday, May 26.
For more information on the 33rd annual Syracuse Motorsports Expo, visit online at www.syracusemotorsportsexpo.com.