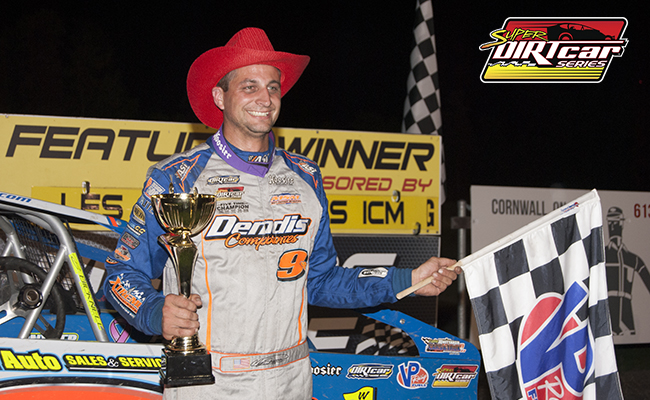 No Such Thing As An Off-Season For Matt Sheppard

No Such Thing As An Off-Season For Matt Sheppard

After a successful year where ‘Super’ Matt Sheppard picked up yet another Super DIRTcar Series Championship, many may wonder what exactly does the seven-time champ do once the checkered flag has been thrown on race season?

“Right now, I’m busy trying to get my shop finished at my house so I can move everything in,” Sheppard said. “That’s the biggest thing going on right now. I want to get the shop done, get moved in, then after that we’ll worry about getting back to working on the cars.”

Once Sheppard gets his no.9s machines into the new stable the off-season maintenance will officially begin.

“We do our maintenance at certain time periods,” noted Sheppard. “Anything that isn’t lapped out isn’t going to get any maintenance. The stuff that is lapped out will get maintained or replaced.”

Sheppard, a fulltime race car driver, takes advantage of the off-season by doing some extra work for other teams and drivers.

“I have two cars ready to go to Florida that I can load right into the trailer so it’s not a big deal,” he said. “I could be ready to go but I have cars I need to build for other people and bodies on order. The off season, nowadays, I don’t have a whole lot of work to do on my own stuff. I do a lot of work on everyone else’s stuff, so there’s definitely plenty to do as always.”

For most drivers, the off-season is a good time to go out and do things they don’t usually get to do during the summer months, for Sheppard, racing never has an off-season.

“It’s been crazy,” he said. “Winter started extra early up here, so I haven’t been able to do anything outside. I’ve been spending seven days a week working on the shop and trying to get stuff moved so there hasn’t been much of a break. It seems like every year the off season gets shorter and shorter. We don’t even have time to pick stuff up or rake leaves. When we got done racing it’s almost the middle of November with a foot of snow on the ground and zero degrees out.”

With 80+ starts in 2018, Sheppard is looking forward to a little downtime when he can get it this winter.

“The off-season is definitely a change of pace,” added Sheppard. “I do enjoy it, it just seems like it gets shorter and busier every year. It gets to the point where between the holidays and banquets and car shows, you don’t even get a free weekend in the off season either. There was a point in my life where all I wanted to do is race, then you get older and try to enjoy life, all you want to do is have a weekend away from racing.”

With only a few weeks into the off-season, Sheppard hasn’t quite set his schedule in stone yet for 2019.

“I’d imagine it’ll be the same schedule as last year,” he said. “I haven’t really got into it yet. Early December will be the time to get serious.”

Heading into 2019 Sheppard will be in the hunt to tie Brett Hearn’s eight-time Series Championship stat, a record few thought could ever be breached.

“Eight championships is a lot,” he said. “When I was still looking for my first championship, I think me and Brett battled down to the end. That’s when he won his seventh. A few years later he won his eighth. I guess I figured he’d still be winning them. I never dreamed we’d be able to string this many together. I never dreamed we’d get seven championships, but I’m very fortunate to have some great teams who helped me get here. There’s so many things that go into it that people don’t realize. You have to have everything and have everything go your way.”

Going into 2019 Sheppard will once again be looking to add another notch to his belt and be in the hunt to change history.