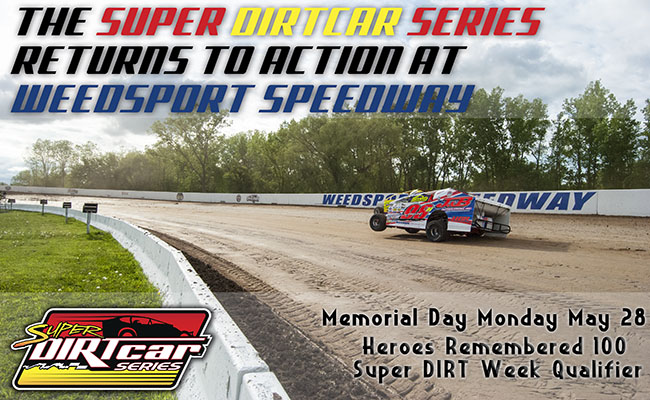 CONCORD, NC – May 22, 2018 – Memorial Day is a solemn reminder of the high price our country’s soldiers have paid in our defense. Many of us spend the day with our family and our friends, living life to the fullest for those who no longer can. On Monday May 28, Memorial Day, Weedsport Speedway hosts the Northeast’s premier Super DIRTcar Series Big-Block Modifieds for the Heroes Remembered 100 in honor of our nation’s military members who made the ultimate sacrifice. Elite drivers from all over the northeast United States and Canada will descend on the 3/8-mile dirt track in Central New York to put on a show for all to enjoy.

Weedsport Speedway has a legendary history with the Super DIRT Car Series, having hosted 63 races since 1972. Series star Danny Johnson has captured the most Super DIRTcar Series victories at The Port with 11 starting in 1983. Defending Series Champion Matt Shepard and four-time Super DIRT Week winner Stewart Friesen split the two Series races at Weedsport Speedway last year. Brett The Jet Hearn holds the Series track record with a 15.241 second lap, which he set in 2015.

The historic speedway has undergone significant improvements to the facilities over the last few years. After being purchased by Al Heinke and Jimmy Phelps in 2013, the track reopened with new grandstands, concessions, and an HD video board. The new ownership group has invested heavily in these amenities, making the The Port a highly-regarded destination for family fun in Central New York. Jimmy Phelps says they are not done yet because soon guests will have an opportunity to sample the region’s craft beers in a newly constructed beer garden.

Visit Weedsport Speedway’s website for ticket information. Also follow them on Facebook and Twitter for track news and notes. The next Super DIRTcar Series race is on Friday June 15 at The D-Shaped Demon Brewerton Speedway, where Matt Shepard will look to add a fourth Super DIRTcar Series wins in a row at the speedway.

To access live and on-demand coverage of these events, visit FloRacing.com and become a monthly or annual PRO subscriber. Either subscription unlocks access to premium content across the entire FloSports network. Watch the races on your big screen by downloading the FloSports app on iOS, Roku or Apple TV 4.