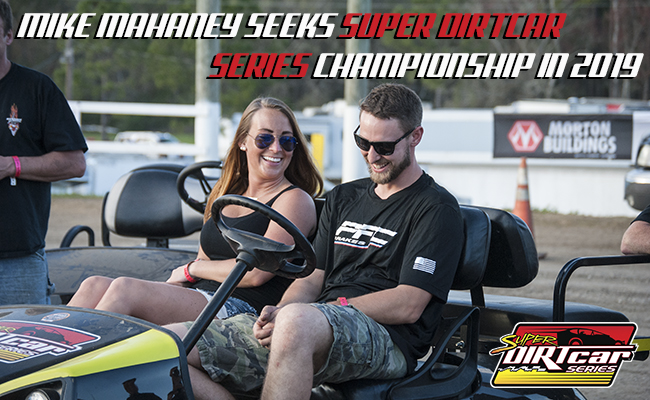 Mahaney and Huttig Team Up for 2019

Mandee Pauch Relations – December 13, 2018 –It wasn’t too long ago when Mike Mahaney announced he was a free agent for the 2019 season. It didn’t take long after that for the dynamic duo out of Elizabethtown, NY, George and Julie Huttig, to come in and sweep him up.

“When I first met Mike a few years ago we immediately had a connection,” said Julie Huttig. “It was interesting when we reconnected on the phone a little while ago, for us and for him, it all kind of came together. I’ve watched him and followed him. There’s something about him that I have a ton of respect for.”

Mahaney is equally happy with the arrangement as the Huttig’s and is looking forward to tackling 2019 with his new team.

“I’m really grateful that George and Julie have taken me in as one of their own and to give me such a great opportunity,” Mahaney said.

George and Julie have been involved in modified racing with race car driver Mike Perrotte for over 30 years and are ecstatic for their newest endeavor to unfold.

“I think this will be a great opportunity for the both of us,” George noted. “I saw Mike run in his own stuff and I know what he’s capable of. I don’t think he had the best chance and I want to prove what he can do.”

Unlike years in the past where Mahaney dabbled in both modified and sprint cars, Mahaney will be turning his entire focus onto their modified program where they will team up for a 2019 all-out assault on the Super DIRTcar Series plus weekly racing at Airborne Speedway Park as well as select Big Block and Small Block Modified shows.

“I never had the opportunity before to run the full series with one team,” Mahaney noted. “It’s a great feeling that they’re giving me the opportunity to run the whole series plus run weekly, so we can get our cars tuned in for the series as well. I’ve been wanting this kind of opportunity for quite some time and am really excited to make the most of it.”

Mahaney said he’s thrilled about the opportunity, especially to be working with such like-minded people.

The Super DIRTcar Series saw the Huttig owned No.35 team travel the full circuit only one time, back in 2016 where they earned their first Series victory at Drummondville with Frank Cozze. The opportunity to hit the road once again is a dream come true to George.

“I like to be challenged and you’re certainly challenged when you do the tour,” said George. “We want to race and be competitive, but most importantly have some fun, and I know Mike can do that for us.”

To stay connected with Mike Mahaney for future news, race updates and behind the scenes content, please follow Mahaney on…