McLaughlin and Hearn Team Up for 2017 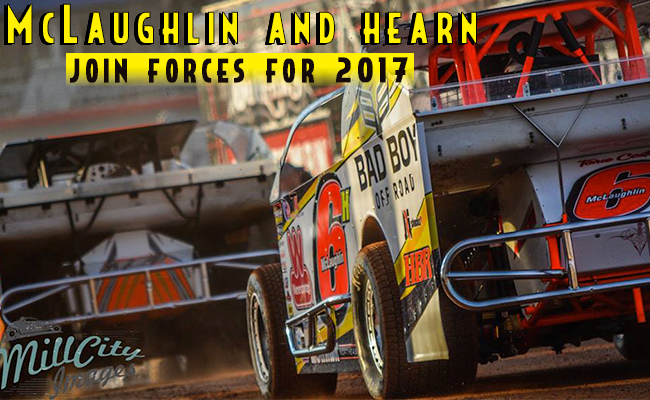 McLaughlin and Hearn Team Up for 2017

CONCORD, N.C.- February 7, 2017 – The young gun from Mooresville, N.C., Max McLaughlin, has his site set on big things for this upcoming season as he will have a new crew chief by his side for his run with the Super DIRTcar Series.

Heinke-Baldwin Racing has added Matt Hearn to the team as crew chief of the No. 6H machine. McLaughlin’s father, ‘Magic Shoes’ Mike McLaughlin, was his son’s crew chief for his first season with the Series. ‘Magic Shoes’ will now be overseeing the entire HBR team in the shop and on the road.

“I’m looking forward to the resources that they have,” Hearn said. “They have an unbelievable team and have way more resources than anybody else. They’re a good group of guys to work with.”

The last time Hearn followed the entire Series was when he worked as the fulltime crew chief for his uncle, Brett Hearn  in 2012.

McLaughlin is excited to have the opportunity to work with Hearn. “He has a pretty successful background,” said McLaughlin. “He’s worked a lot with his uncle as well as Dippel and [Stewart] Friesen who’s had a lot of success. So I’m excited to work with him. I think it’ll be good for the both of us.”

During mid-season last year, McLaughlin’s teammate, Jimmy Phelps, made the big switch from Troyer Racecars to Teo Pro. “Once Al [Heinke] came down and got Jimmy’s cars from us I started to go up there and help them test,” Hearn said. “They mentioned they were looking for someone that’ll go on the road and help Max that knows the car.”

Teo Pro is Hearn’s family run business and with Hearn’s knowledge, McLaughlin is confident in him. “Matt’s really smart and the connection with Teo works really well for us,” McLaughlin said. “I think it will be good to have someone closer to my age to work with.”

The new combination will have their first test and tune at DIRTcar Nationals in February at Volusia Speedway Park. McLaughlin will be put to the test as he will have a new crew chief and a completely new car. “I’ve been to Florida a few times and I like that place a lot,” McLaughlin said. “It’ll be my first time in a Teo car so we’ll see how it goes.”

McLaughlin is very eager to get to DIRTcar Nationals with Hearn to see how they will work together. “I think it’ll be a great deal for the both of us and hopefully we can come out with a win or two,” stated McLaughlin.

Last year was McLaughlin’s first full season with the Super DIRTcar Series, finishing 13th overall in the championship point standings. McLaughlin is getting a head start to the season, as he is one of the first drivers to sign up for the 2017 platinum agreement.

With Hearn’s knowledge and McLaughlin’s notes from his first season, the new team will be one to watch this upcoming season.