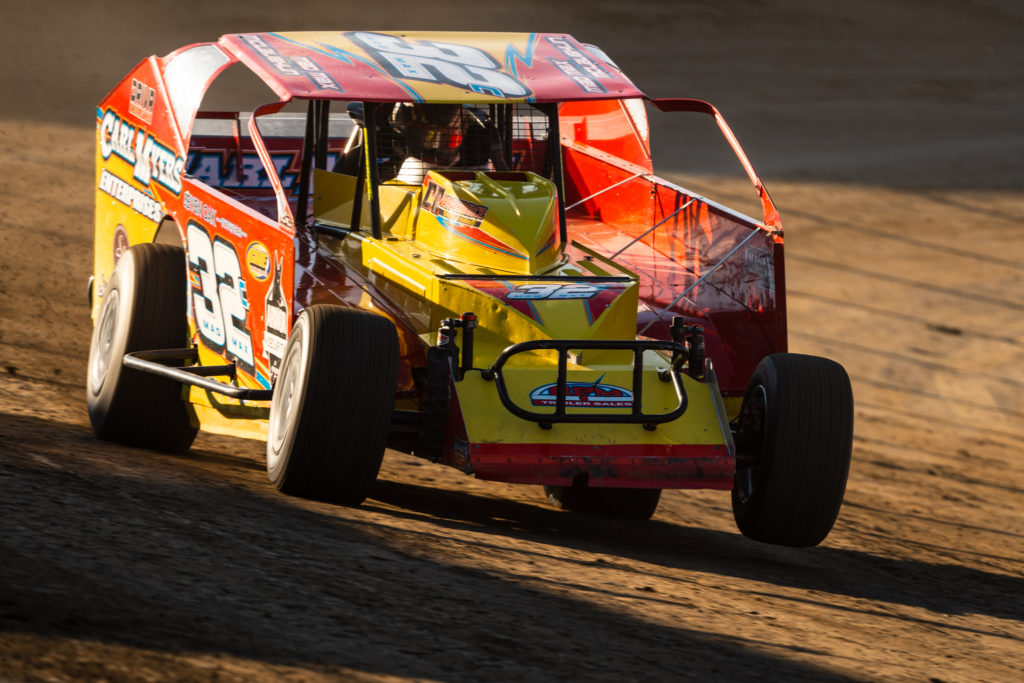 WEEDSPORT, NY – Max McLaughlin, from Mooresville, NC, is back home, both literally and figuratively, to Weedsport Speedway. Not only did McLaughlin pick up his first career Super DIRTcar Series win at the legendary ⅜-mile Central New York speedway [October 2020], but he also actually lived on the grounds of the track.

McLaughlin is also back home in the seat of a Big Block Modified. He is one of those talents that can slip into an asphalt modified, an outlaw go-kart at Millbridge, a World of Outlaws Morton Buildings Late Model, and back into his 900-horsepower Big Block without missing a beat.

“I want to win everywhere in everything,” McLaughlin said. “But Weedsport is huge. I thought I had a shot at winning there last time at the Hall of Fame 100 but Friesen spoiled that for us. I am looking forward to this doubleheader. It’s probably my best track.”

Weedsport Speedway is special in many ways to Max McLaughlin. One would assume that his many laps there would be what has given him an edge at the historic track. But McLaughlin points to one source for his approach to Weedsport and Big Block racing in general: Gary Tomkins [18 Super DIRTcar Series wins].

“I run a unique line there compared to most,” noted McLaughlin. “It’s something I watched Gary Tomkins do. I owe Gary a lot for making me as successful as I am at Weedsport. He runs this unique line and I asked him about it early in my career.”

When McLaughlin hit the Big Block scene he was a fish out of water.

“I came from a different form of dirt racing and I was horrible in the Big Block,” he said. “In 2016 I was lapped traffic every week. Gary explained to me that these things will never have side bite on the throttle. You gotta lift and carry entry speed into the corner. Once you get tracking sideways you can’t be on the throttle. That’s something I think about every race we go to. Weedsport is one track where that advice works really well.”

Successful drivers like Brett Hearn have always shown that surrounding yourself with high-quality talent will elevate your performance.

“I’ve had great people around me my entire career,” McLaughlin said. “Obviously my dad [Mike McLaughlin], Jimmy Phelps who has been like a big brother to me, and now I have Vic Coffey right there [two-time NAPA Super DIRT Week champion]. But out of all of that, the one thing I remember the most is what Gary Tomkins said.”

The Vic Coffey-owned #32C has been strong throughout the 2021 season. McLaughlin currently runs sixth in Super DIRTcar Series points just -137 points from the leader. Some nights #32C is lights-out fast, a clear podium car, and other nights he is running hard with the very competitive pack.

“I got second there last time and just couldn’t catch Stew [Friesen],” he said. “The time before that I ran eighth, but the Panhard bar was totally broken off the frame. So we ran that race with the rear end just smacking around. It’s a lot more fun with a good handling car!”

McLaughlin is going for the double to take a big chunk out of points leader Matt Sheppard’s margin. A one-two punch should do it.

Drivers always talk about laps. McLaughlin has put down more than most at Weedsport, if you count virtual laps on iRacing, the official racing simulation of the Super DIRTcar Series.

“The iRacing laps have there are huge,” he said. “It’s so realistic. I couldn’t believe it when it came out. I ran it for two days straight.”

iRacers, be sure to go follow McLaughlin at Weedsport and find out how to run his secret Gary Tomkins line.

NAPA SUPER DIRT WEEK: Tickets, parking passes, and camping are limited at NAPA Super DIRT Week. Be sure to get yours NOW.