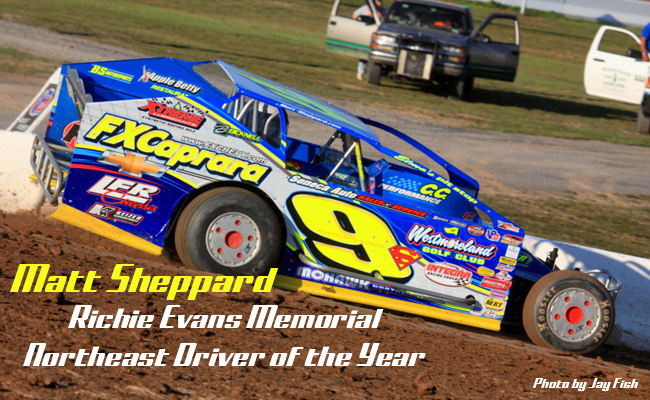 Richie Evans, a former driver from Rome, N.Y., is often referred to as one of the greatest racecar drivers to ever get behind the wheel. Evans, a nine-time NASCAR champion, won eight consecutive titles from 1978 to 1985 and was voted into the NASCAR Hall of Fame in 2011. The Northeast Driver of the Year Award was re-named after Richie Evans in 1985 after his tragic death at Martinsville Speedway. The Richie Evans Memorial Northeast Driver of the Year award is voted on by the EMPA membership after the awards committee considers nominees based on season-long performance.

“It’s definitely a huge honor,” Sheppard said. “I’ve been nominated a bunch of times and never won it before. This kind of caught me by surprise. This year I forgot about it, but when I received word that I [won] it, it’s truly a special honor. Richie Evans was huge, probably was one of the best ever to get into a racecar. That will never be forgotten.”

EMPA was created in Feb. 1969 by Ernie Saxton, Red Kirsch, Al Consoli, Jim Cutler and John Ernesto during a meeting at a hotel in Daytona Beach, Fla. The aim of EMPA is to foster a better understanding by recognizing the true value between an organization and its press to improve working conditions.

To learn more about the Eastern Motorsport Press Association, visit www.empaonline.org. More information about the Super DIRTcar Series can be found by visiting www.SuperDIRTcarSeries.com.