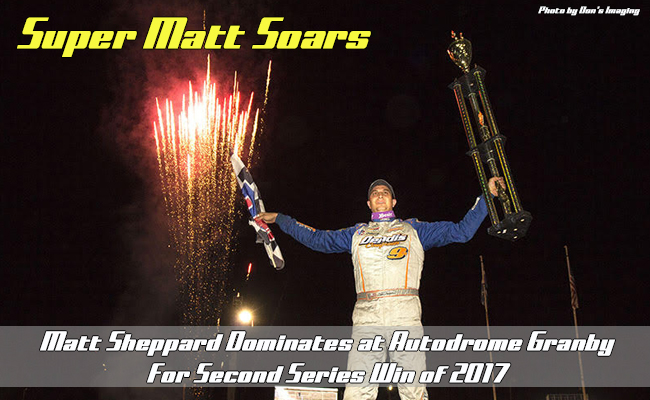 GRANBY, QC, CAN – July 25, 2017 – In front of a packed house and clear skies, the Super DIRTcar Series started a successful Quebec swing at Autodrome Granby as Matt Sheppard had a dominant run to get his second win of the season on the tour.

“It feels good,” Sheppard said in the Winner’s Circle. ‘’I always seem to have success when I come up in Quebec. I think these tracks are made for me and it is always fun to race in front of these great fans,’’ added Sheppard in front of the packed Autodrome Granby stands as the always are for the Series’ Quebec swing.

“I came close last week, but had issues with a tire but happy to be here and hats off to (Pat) Ward for his second-place (finish).”

Challenging Sheppard on a few occasions was Ward, who finished second.

“I tried but didn’t have enough,” Ward said. “My time will come.”

Completing the podium was Brett Hearn.

“I was two pounds over limit and ran out of gas at the scale,” Hearn said. ‘’I always have success up here. It’s always great to come back here.”

The original start saw Tim Fuller lead as Brandon Walters stopped in the backstretch. On the restart, Fuller remained in front with David Hebert and Larry Wight in third. Hebert was strong on the high side and grabbed the lead on lap 5. Stewart Friesen slowed and brought out the caution on the following lap.

Hebert and Fuller swapped the lead on a lap 11 restart as the driver of the No.19 was back in front with Hearn in third. Hebert was back in front on lap 20 after he made a great pass on Fuller using the inside lane. Hearn made a similar move to take second from Fuller just as the leaders got into lapped traffic on lap 25.

Hearn had a great restart on lap 29 to take the lead from Hebert as Sheppard ran in third. Hebert started to fade and gave third to Ward on lap 36. Sheppard had a dominant ride as he took the lead on lap 44 from Hearn and quickly pulled away from the field.

Max McLaughlin slowed the field down on lap 51. When the green lights were back on, Sheppard stayed on top as Larry Wight drove to fourth and Peter Britten cracked the top 5. Ward started to challenge Hearn for second and he was able to take the second spot on lap 57.

A few cautions slowed the final portion of the feature as Sheppard had to resist a few charges from Ward in the closing laps with Hearn completing the podium.

For full results from the Super DIRTcar Series at Autodrome Granby, click here.