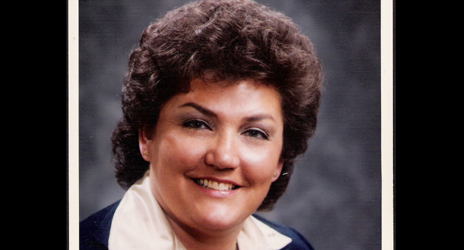 Marilyn Toal joins Zelda Reakes as a co-recipient of the seventh annual Gater Racing News “Outstanding Woman in Racing” award during the 2008 Northeast Modified Hall of Fame Induction ceremonies Sunday, May 25 on the Cayuga County Fairgrounds held in conjunction with the Advance Auto Parts Super DIRTcar Series event at the adjacent speedway.

This special award was initiated in 2002 to recognize outstanding contributions made by women in auto racing during a customary time of tribute to the legendary male drivers in our sport.

It may seem somewhat strange that a person synonymous with asphalt racing and the Race of Champions Modified title event would be recognized by the Northeast Modified Hall of Fame. Marilyn Toal began her ride with auto racing in 1958 yet as fate would have it she attended her first Race of Champions at Langhorne (Pa.) Int’l Motor Speedway the last year (1964) it ran on dirt.

“My job at Kodak in Rochester (NY) allowed me the opportunity to be involved with a sports boosters club,” Marilyn stated. “Through this club we organized trips to sporting events and made tickets available to members and (promoter) Joe Gerber allowed me to sell tickets for his Race of Champions event. This plan proved to be so successful I became known as the person in Upstate New York to get your RoC tickets from.”

An off-spring of the Kodak Park Athletic Association (KPAA) that originated in 1910, the Kodak Auto Racing Boosters Club began to grow with Marilyn and her husband Don taking on roles as lead officers. Each year the club staged its annual banquet —an affair that took most of the year to plan— during the winter months.

“We had some really great names in auto racing as our guest speakers,” Toal added. Many of the speakers can help make up a list of ‘Who’s Who’ in auto racing during the 70’s and up through the 90’s, including Alan Kulwicki, one of Marilyn’s favorites. On one occasion following the banquet the Toals were entertaining Kulwicki when he donned Marilyn’s blue suede slippers and began dancing on the table.

“Darrell Waltrip was scheduled to speak one year but a rain delay at Martinsville forced him to stay at the Virginia track. The R.J. Reynolds Company stepped forward and video taped Darrell’s presentation, then set up all of the equipment to make it happen at our banquet.”

“When Glen Donnelly started Super DIRT Week we naturally became involved. And again as racing boosters and I was selling Super DIRT Week tickets to Kodak Auto Racing Boosters Club members and non-members alike. We were able to get Kodak involved with DIRT Motorsports through the years as a sponsor and supporter, including a special pole award for the Big-Blocks. We also set up Kodak Nights at all of Glenn’s tracks —Canandaigua, Cayuga County, Rolling Wheels— as well as bus transportation for our members,” added Toal, who along with Don, was voted into the RoC Hall of Fame in 1998.

Marilyn, who retired from the Eastman Kodak Company in March of 1986, still remains active in racing today. Her main task is selling lap sponsorships for the Race of Champions, now held at Oswego (NY) Speedway in September. But it was her involvement with DIRTcar Racing that brings us to recognize her on Sunday with the Gater News Outstanding Woman in Auto Racing award.