MAHANEY MATTERS: Mike Mahaney is ready to fly in 2020

CONCORD, NC – King Ferry, NY’s Mike Mahaney has a reputation. In the pit area, the full-time Super DIRTcar Series competitor has a smile as wide as a front stretch is long but on the track, he’s known as a ferocious competitor.

2019 was a revolutionary year for Mahaney. He joined one of the most storied race teams in the history of dirt modified racing in the Northeast: The iconic yellow George and Julie Huttig-owned Adirondack Auto no. 35. 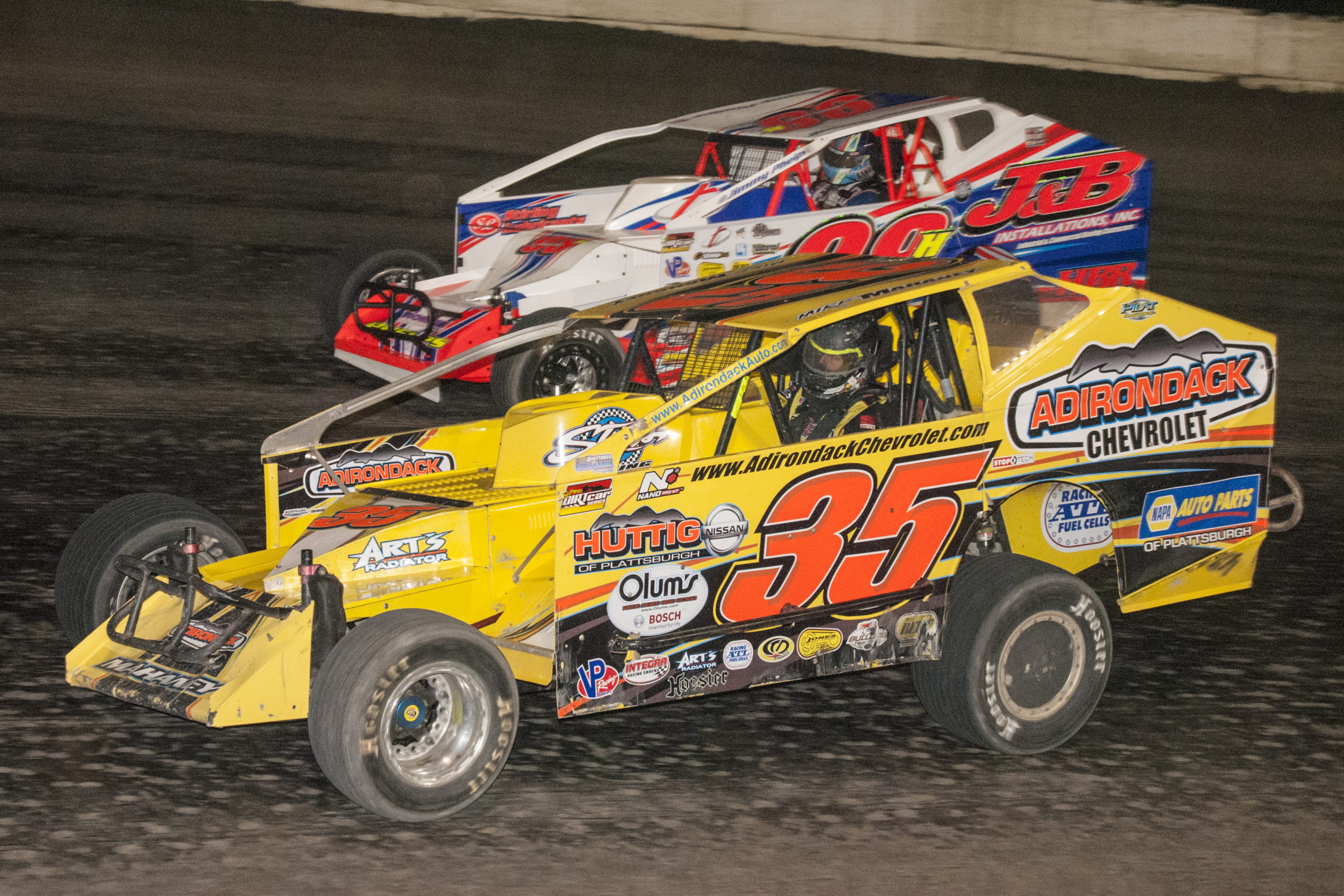 NAPA Super DIRT Week fans will immediately recognize the yellow paint scheme as it has been entered in the Billy Whittaker Cars 200 for many years with top drivers behind the wheel such as Mike Perrotte, Wayne Jelly, and Frank Cozze.

Perrotte was the Huttig’s first driver and he brought the No. 35 to the team in 1985. It’s been emblazoned on the Huttig machine ever since.

Traditionally, outside of NAPA Super DIRT Week, the Huttigs fielded a DIRTcar 358 Modified rather than a Big Blocks. But with Mahaney on board, the Adirondak Auto team enters a new era.

As a full-time driver, any lull in action is difficult, especially one as extended as we are experiencing in the midst of the global COVID-19 pandemic.

“This whole thing has everyone nervous because we just don’t know what to expect,” said Mahaney. “It would be nice to get out there but the next best thing has been iRacing.” The only difference is that the dirt is digital and the cars are virtual but the competition has been incredibly fun for fans and competitors alike.

Mahaney has been competing in the World of Outlaws iRacing Invitationals against some of the best drivers across the country and even the world. His sponsors have been exposed to many thousands of people on FOX Sports, CBS Sports, and DIRTvision making the friendly competition well worth the time for a full-time racer who depends on sponsors. 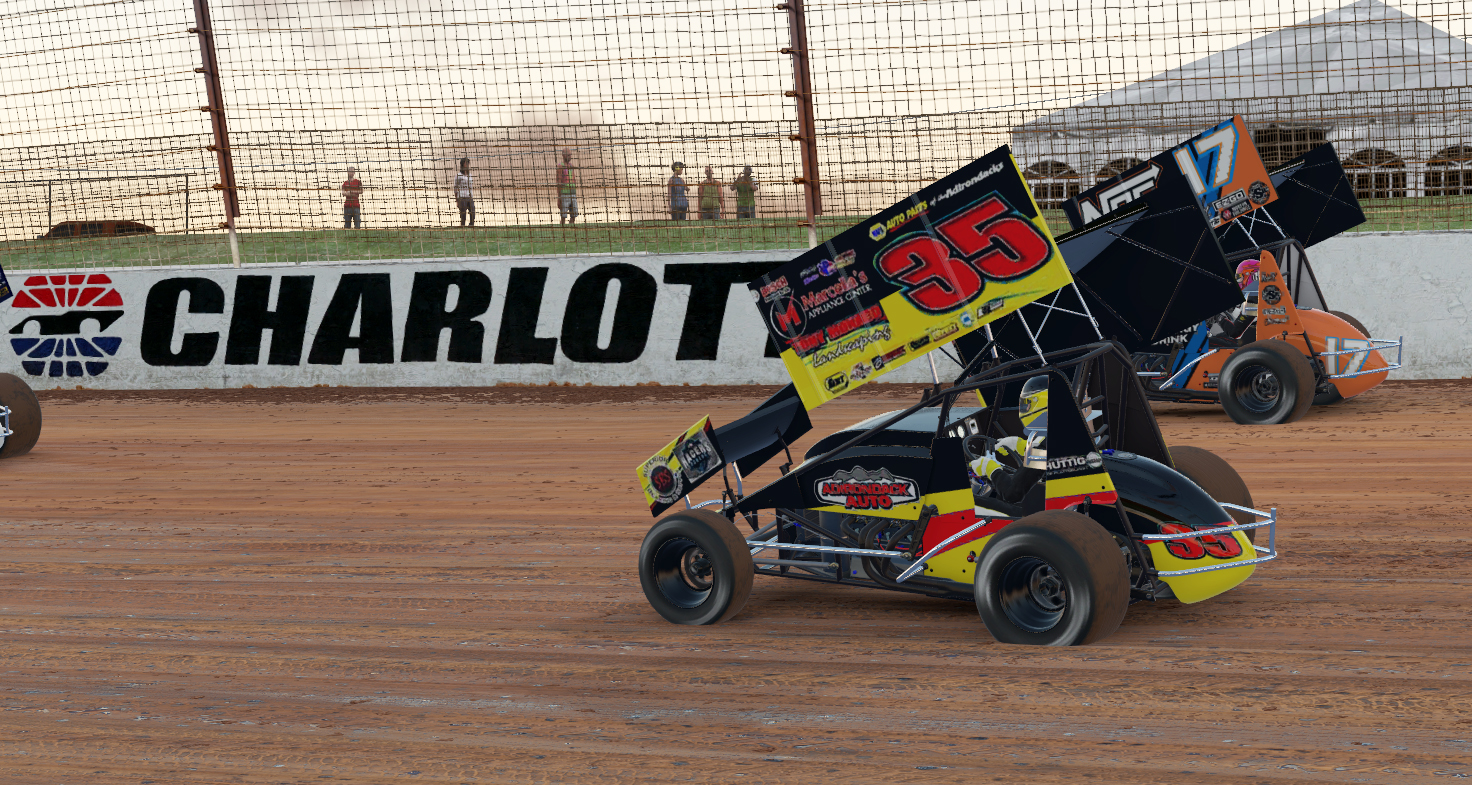 “We have been able to put on a show and advertise our sponsors where if we can’t get on the track this is the next best thing to keep their names out there and show them off a bit in a positive way,” said Mahaney. “There’s a lot of negativity out there and this was positive we can do.”

Since day one of the shutdown, the World of Outlaws and DIRTcar Racing have been working diligently to create racing entertainment for the present while we prepare for the “Return to Racing” and reaction to the iRacing shows has been tremendous.

When it comes to the racing there are adjustments for real-life drivers to make.

“The simulator has limitations. You don’t get a “seat of your pants” feeling from the race car of course but it works on your hand-eye coordination and you’re working on your audio coordination,” he noted. “The track changes. You have to move around to find the right groove. You gotta do trial and error with setups. It’s not necessarily the exact changes that we make in real life but you do have to try something to see if the car got faster. You get into that rhythm of what you do in real life.”

Mahaney has been paired against some of the best World of Outlaws NOS Energy Drink Sprint Car drivers plus stars from NASCAR like Joey Logano, Will Byron, and even Formula 1 and IndyCar star Juan Pablo Montoya.

“The best part of iRacing is that it doesn’t matter where you are, you can race against people from across the world. We are a Northeast division so it’s rare for us to run into drivers from California or Texas,” Mahaney said. “It’s cool not only because you can race with each other but you get to talk to each other too. We’re on the radio chatting it up and people are going a little bit of trash talking. Instead of fighting in the pits they just say what they want to say and it’s over.”

Of course, sitting behind the wheel of a simulator in your basement or race shop mostly eliminates the risk factor of making a gutsy slider. Mahaney likens the racing to, “having 25 Jac Haudenchild’s out there going as hard as they can go every lap and not giving an inch. And why not? You don’t have a whole lot to risk.”

Of course, there’s no substitute for the smell of VP Racing Fuel, the heat of the Big Block’s exhaust, and the sound of a cheering crowd.

Race fans can catch Mahaney out on the Super DIRTcar Series trail when the tour starts up again. Additionally, the Adirondack Auto team will also be on the hunt for valuable Hoosier Racing Tire Weekly Championship points at Albany-Saratoga Speedway and, new for 2020, Orange County Fair Speedway. 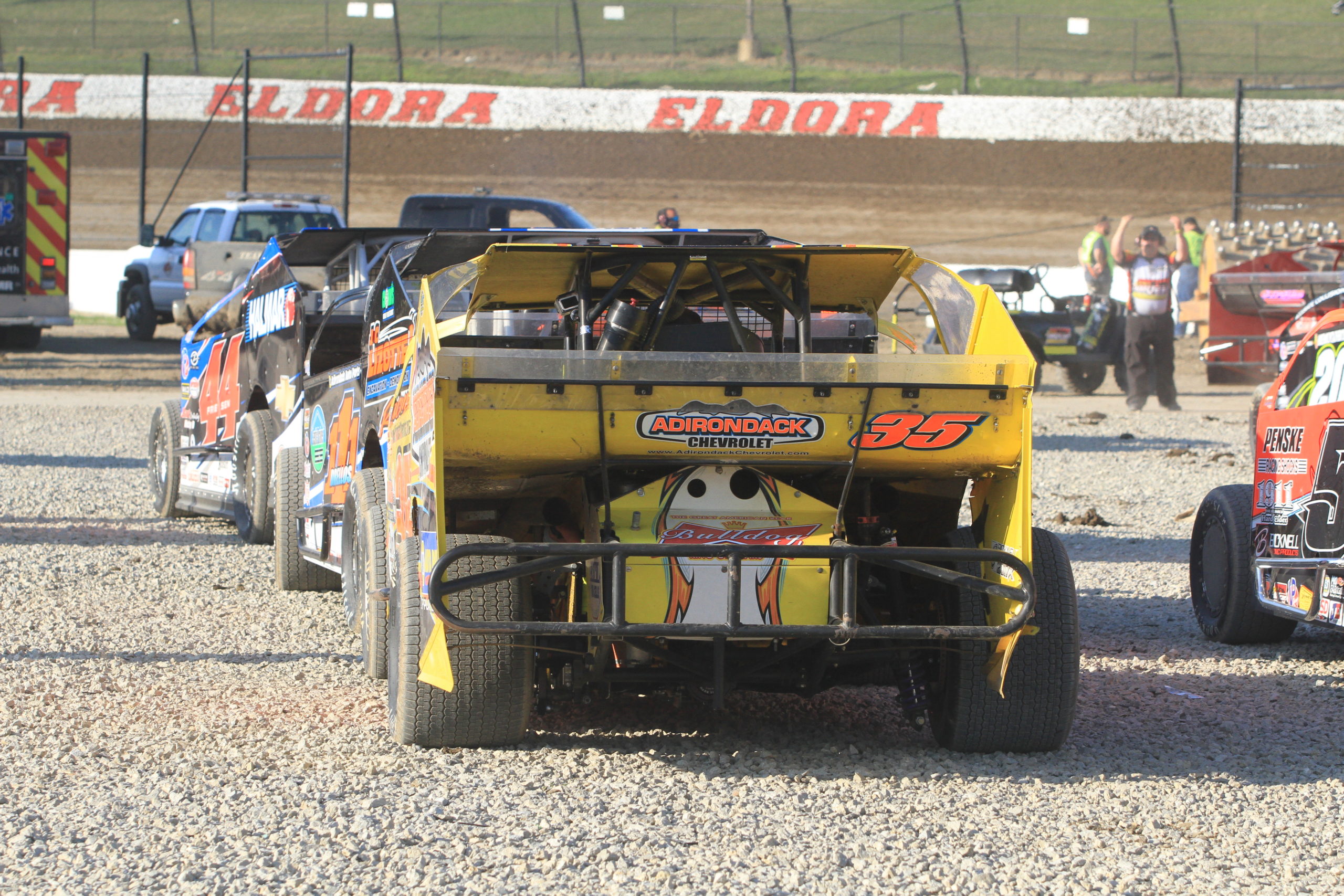 Now in the second year of the DIRTcar Big Block Modified program, Mahaney and team are ready to rock.

“We were going to be more prepared than ever before the pandemic but now all we have is time,” said Mahaney. “Without being able to race or test, we’ve learned more about what to work on in the shop. But we won’t know what to do with the cars until we run them.”

Between the Super DIRTcar Series, Hoosier Racing Tire Weekly racing at Albany-Saratoga Speedway, Orange County Fair Speedway, plus select races at Utica-Rome Speedway, the team has to keep up a strict maintenance schedule rotating equipment in and out.

On some weeks the Adirondack Auto machine will can potentially race four DIRTcar events. The common rulebook makes that possible. “Going from DIRTcar track to DIRTcar track we know we can run our Hoosier Racing Tires and Big Block,” said Mahaney.

Mahaney is excited to start racing at Orange County.

“There’s a big attraction to running Orange County. There’s a really good weekly purse and a great point fund. DIRTcar sanctioning means we know 100 percent what we are getting into for rules,” he noted. “There’s a strict rulebook and with Brett Hearn running it, I think knowing him as a racer and a professional, he’ll keep to the rulebook. You know what you expect.”

Needless to say when the Return of Racing comes to the Northeast, Mike Mahaney and his team will be ready. Of course they could not do it all without the support of their sponsors Adirondak Auto, Huttig Nissan, Marcella’s Appliances, Bosch, and Darcy Construction. 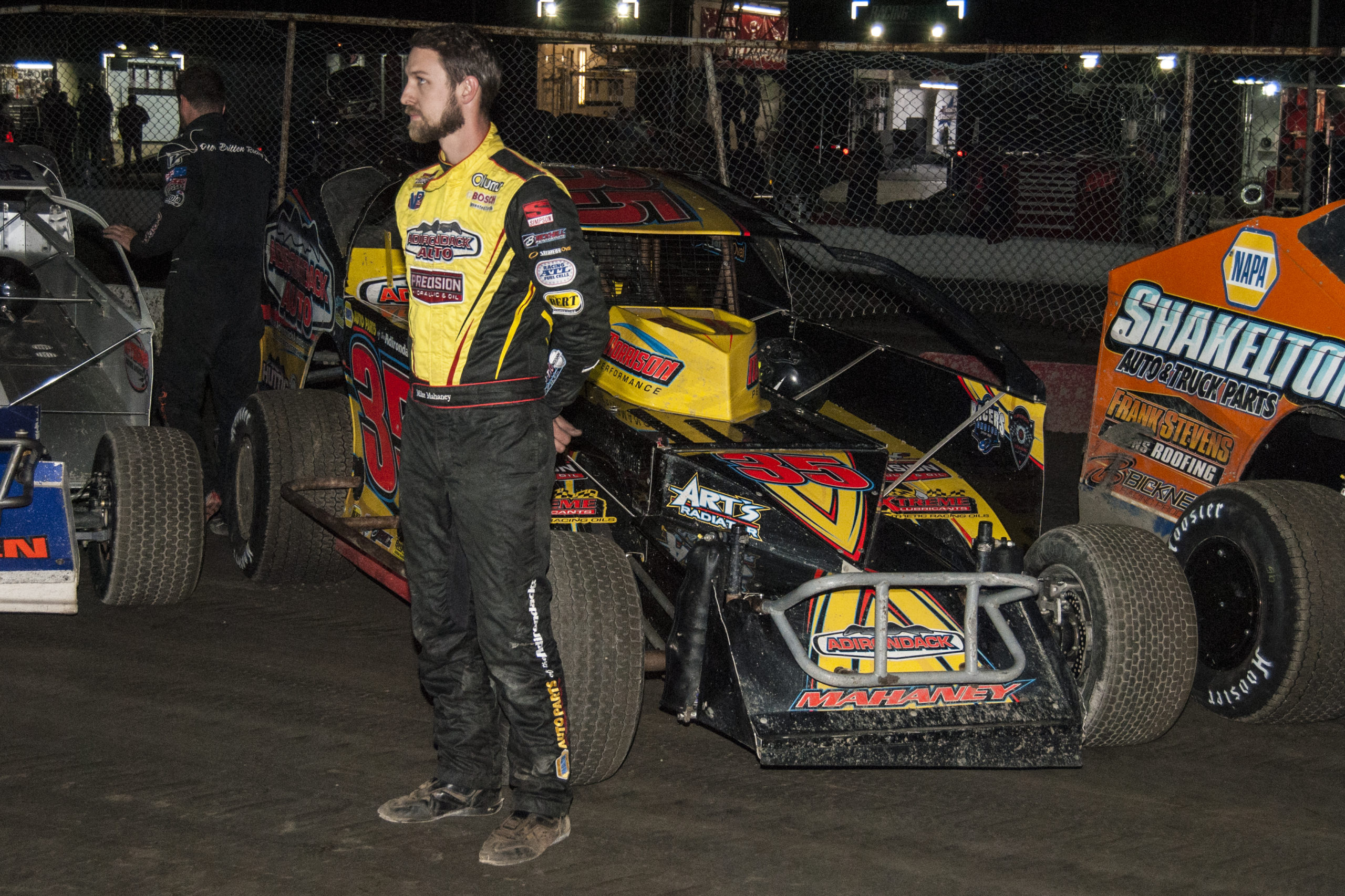 Get connected to Mike Mahaney Racing. Check out his official website, Facebook, Twitter, and Instagram. Be sure to come out to the Albany-Saratoga Speedway Fridays, Orange County Fair Speedway Saturdays, and all along the Super DIRTcar Series tour.