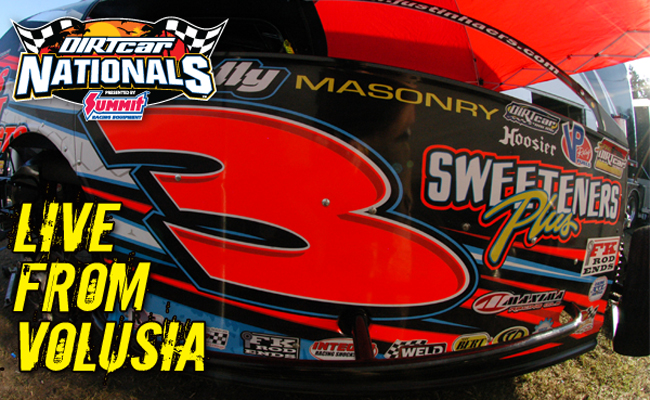 BARBERVILLE, FLA. – Thursday, February 20, 2014 – The Big-Block Modified action from last night at Volusia Speedway Park kept fans – whether in the grandstands or tuning in to DIRTvision from home – on their feet. Tonight’s racing is set to be even more exciting. Keep track of the latest news from tonight by keeping this live updates page loaded; we’ll be posting results and news here as it unfolds.

The top five from each 8-lap heat race qualify for the feature race. Top two from each redraw.

Drivers participated in a a pill draw before the drivers’ meeting to assign qualifying groups. Timed hot laps run in drivers’ respective groups will set the field for the heat races, with the fastest cars starting in front.

Each heat race will be 8 green laps, cautions will not count. The top five cars will transfer to the feature and the remainder will have another opportunity to qualify in B-Main races to follow. The top two cars will redraw for the top starting positions. Each of tonight’s two B-Main last-chance qualifiers will let two competitors transfer to the feature. Two provisional spots have been allocated in the starting lineup for the top two nonqualifying competitors with the most Gator Points earned in DIRTcar Nationals presented by Summit Racing Equipment  Big-Block Modified Competition.

Coming off last night’s win at Volusia Speedway Park, Justin Haers, of Phelps, N.Y., seems to be keeping the momentum up. He was fastest overall in time trials with a lap time of 17.189 seconds. Rookie Anthony Perrego, who finished second yesterday, was second overall in time trials and will also be starting on the front row in his heat group. Billy VanInwegen was fastest in group 4 and Peter Britten in group 3.

J.R. Heffner out of running

J.R. Heffner, of Vatalie, N.Y., broke a motor running yesterday, yet still managed to finish 15th in the feature. However, the team isn’t taking any risks today and has bowed out of racing tonight. They were offered a Big-Block engine to use the rest of the week, but declined.

The drive to Florida is a long haul for many Super DIRTcar Series fans in the Northeast, so we’re bringing the action to you! Visit www.dirtvision.com, where you can purchase daily passes to view live video, or a package for the rest of the week.