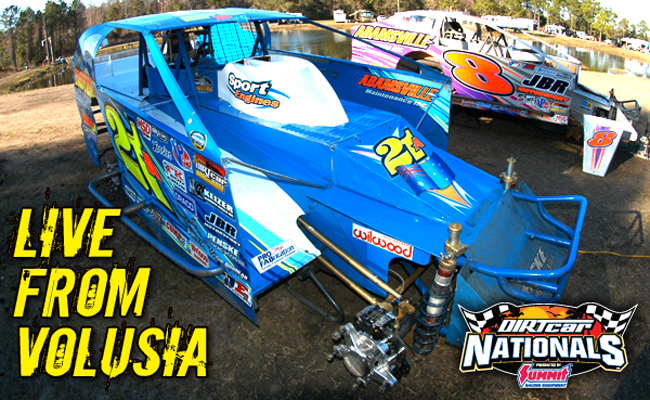 BARBERVILLE, FLA. – Wednesday, February 19, 2014 – The Super DIRTcar Series Big-Block Modified drivers warmed up yesterday at Volusia, but the real action begins today. A full night of racing is on deck for the Super DIRTcar Series, featuring a 30-lap feature race. The UMP DIRTcar Late Models join the Big Blocks at the Florida track. All general admission tickets for tonight’s show include a FREE Fan Pit Pass and are available for purchase at the gate.

If you aren’t able to make it in person, be sure to check out the action at DIRTvision.com. Single day passes and package discounts for the rest of the week are available.

Justin Hears jumped to an early lead in heat 1 over Billy Pauch and Jamie Mills. Mills and Pauch battled for second, but Haers was strong with at least a 10 car-length lead by lap 2. Haers picked up the heat race win, with Pauch second and Mills third. Steve Bernard and Randy Chrysler will also transfer to the feature.

Eight-time Super DIRTcar Series champion Brett Hearn shared the starting front row with rookie and fast-timer Anthony Perrego, and battled the Big-Block newcomer at the green flag. But Perrego pulled ahead for the early lead.

Not one to let go of a win, Hearn charged forward and challenged Perrego toward the end, passing the No. 55 as the two rounded turn 1 in the final lap. Perrego pulled on the inside in turn 4 to return the challenge and finished just a nose ahead of Hearn, winning by just a few hundredths of a second.

Mario Clair claimed the initial lead in heat 3, but it wasn’t long before second-placer Scagliotta was able to catch back up. Scagliotta challenged Clair in the last lap, but Clair stayed ahead by just 0.02 seconds.

Australian driver Pete Britten make fast time in his group and started on the front row in heat 4. He pulled ahead to an early lead and fended off challenges from Dale Placnk, who finished second. Also transfering are Jimmy Horton, Neal Williams and Mat Williamson.

7:30 p.m. Tonight’s Super DIRTcar Series heats have been set by time trials. Before competition, each driver enters a pill draw to determine his or her qualifying group. Competitors time trial in their group and the driver with the fastest time leads their group in the heat race.

Four heat races will help set the field for tonight’s feature and one B-Main last-chance qualifier. The top five from each heat will transfer and the top six from the B-Main.

Justin Haers, of Phelps, N.Y., will lead his heat, sharing the front row with Jamie Mills. A regular on the tour, Haers has yet to pick up a series victory, but has raced strong at Volusia in the past. He picked up a second-place finish last year.

Rookie Anthony Perrego and veteran Brett Hearn will lead off group 2. “Super Mario” Clair and Rich Scagliotta will start on the front row in group 3. Peter Britten and Dale Planck have the honor in group 4.

Perrego will start at the pole in his heat race, sharing the front row with veteren Hearn. Also leading their heatas are Justin Haers and Jamie Mills for heat 1, Mario Clair and Rich Schagliotta for heat 3 and Peter Britten and Dale Plan for heat 4.